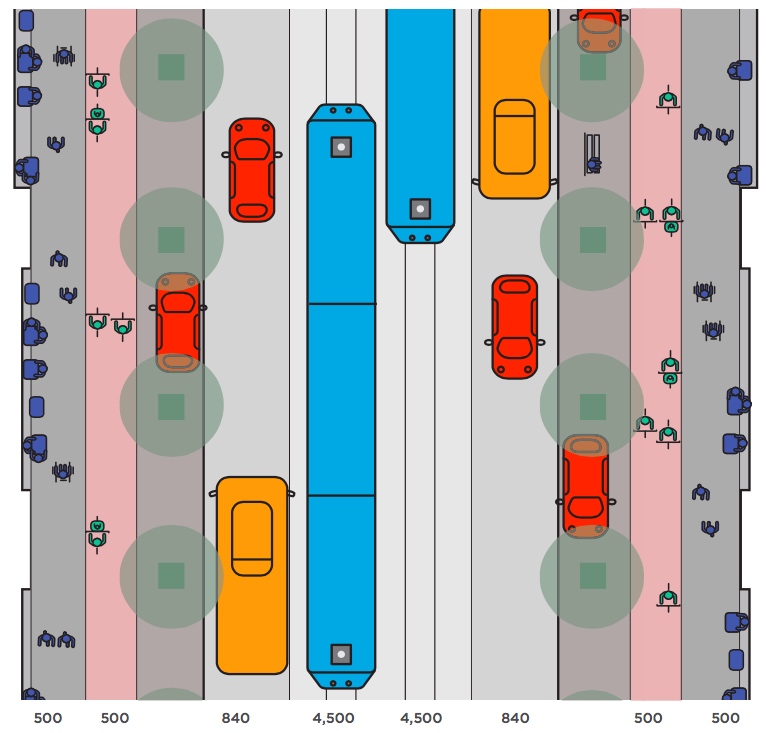 For now at least, we’re all out of cute colourful graphics. Done my dash. Shuffled off this mortal coil as regard the photoshopping route-lines, which were here, and here, and here, and here. But the story is not yet over. Betterbee, the moniker for one of Wellington’s better educated transport gurus, reckons I’ve got it wrong for saying that PT down the Quays is good, and is still adamant that PT route needs to be following the Golden Mile down Lambton Quay, not Customhouse Quay. Personally, I disagree, at least at ground level. I want RAPID Rapid Transit and I don’t want a route which is going to be buggered up by courier vans, turning cars, mindless taxis and ubers, not to mention countless pedestrians wandering gaily across the road with their earphones plugged too far up their alimentary canal.

I’ve been in Melbourne with their endearing century old trams and their constantly clanging bells as they navigate Bourke St Mall, and I wouldn’t wish that on anyone. Ding ding, ding ding, splat. While walking should remain supreme in any city, let’s be honest: pedestrians are fuckwits, at least when it comes to watching where they are walking. Our bipedal system of perambulation is decidedly dodgy when it comes to sharing the space with other users, which is why skateboards, scooters, cycles etc are seen as anathema to walkers. But at least they generally don’t kill – although the first e-scooter death last week in the UK will shake up a few feathers over there. Interestingly, while NZ Police say “oh yeah, naah, mate, its probably ok” with relation to e-scootering etc, in the UK it is illegal to ride them, and get this: its illegal to ride them on the footpath, just as much as it is illegal to ride them on the road. Perhaps they are meant to only be using them inside their own front hallway, which as anyone will know who has ever been to the UK, is usually about the size of a hamster’s handbag.

To the Eye of the Fish, a route down Lambton Quay and Willis St and Manners Mall makes sense only if it is either above ground (like a monorail) or underground (like, umm, the Underground). Before you go singing songs of Shelbyville and North Haverbrook to me, we have shown a picture of that effect some time ago. Plus, an excellent couple of posts over on Talk Wellington discuss that in more detail. I’ve not got the patience to do that.

So, instead, let’s look at Taranaki St. This is an interesting one to me, as for so long people have been assuming that any PT / LR / RT / BRT / TTS / TLA / FFS would HAVE to go down Kent and Cambridge and around the Basin. Well, after all, it is very wide, and could easily take a route that way. I’m guilty of falling into that trap as well at some stage in the past, but instead have gradually come to agree that for any route, whether Lambton or Customhouse, to turn up Taranaki St is a much better option. It provides a handy place to get off for the Courtenay Quarter and avoids the former swamp and boy-racer heaven (and pedestrian hell) of Kent and Cambridge, as well as the quagmire of sticky wickets that has come to be known throughout the nation as The Basin Reserve. Additionally it swoops past the Te Aro campus of the Architecture School, is not far from the new Whitirea campus on Cuba St, and if it continues straight up Taranaki St, it will pass close by both Wellington High and of course Massey’s Wellington campus. That’s an incredibly good piece of stitching together it is doing, with only one key snagging point: where / how / when it crosses the State Highway number One.

I had been assuming that if the SH1 was removed from Vivian St (Hooray!!!) then the new LR would go over the top of SH1 as it carried on up Taranaki St. Makes sense. Leave the cars roaring in a big ditch underground and allow the good burghers of Wellville to walk, ride a bike, scoot, skate, or catch Light Rail all at ground level. Some locals may even drive, which would be much more pleasant now that the Four Lanes to the Planes is now set firmly underground. Makes perfect sense to me. Taranaki St then continues on almost level, until suddenly it starts to get steeper and narrower – the perfect place for our valiant little speedway to enter a tunnel and chuff along underground.

I’m still a little dumb-founded therefore, that the route chosen is that implied in the Figure 13 picture (below) from last week – that the route would take a quick shimmy back and forth across the back of the Australian Memorial at Pukeahu Park. Through the School yards, but I guess the way it is drawn could assume it was installed underground in part when they are building the next part of SH1 via cut and cover. The turning circles of a Light Rail tram is going to make some nasty big cuts across Megan Wraight’s beautiful design for Pukeahu Park, and in continuing down to Adelaide Road the way it is proposed, there are going to be a total of 4 or 5 big sharp corners to manoeuvre from Taranaki to Adelaide. To be honest: I’m not sure that is the best route (you might have guessed I was going to say that).

It also means that the PT route would rejoin the rat race right at the (presently) busiest and most awkward point of all: the junction of Adelaide Road and the Basin, right in front of the (proposed) Chinese Embassy. Yes, it is closest to the Basin (perfect for match day crowds) and school pick-ups (vitally needed to reduce school Mum chaos time at 3pm), but it needs to be separated out and moved at last one street back, in my Humble Opinion….

Let’s see….. if there is one building that is in the wrong place, deserves to go, and shouldn’t be within a 100m of a school frontage, it must be this one, right? Multinational corporate scum with a bad effect on our children’s waistlines? I’m loving it !!

PostScript: plan images are sourced from a number of reports by various authors, all found on the LGWM documentation website, and are indicative only. EOTF gratefully acknowledges the work these consultants have made.