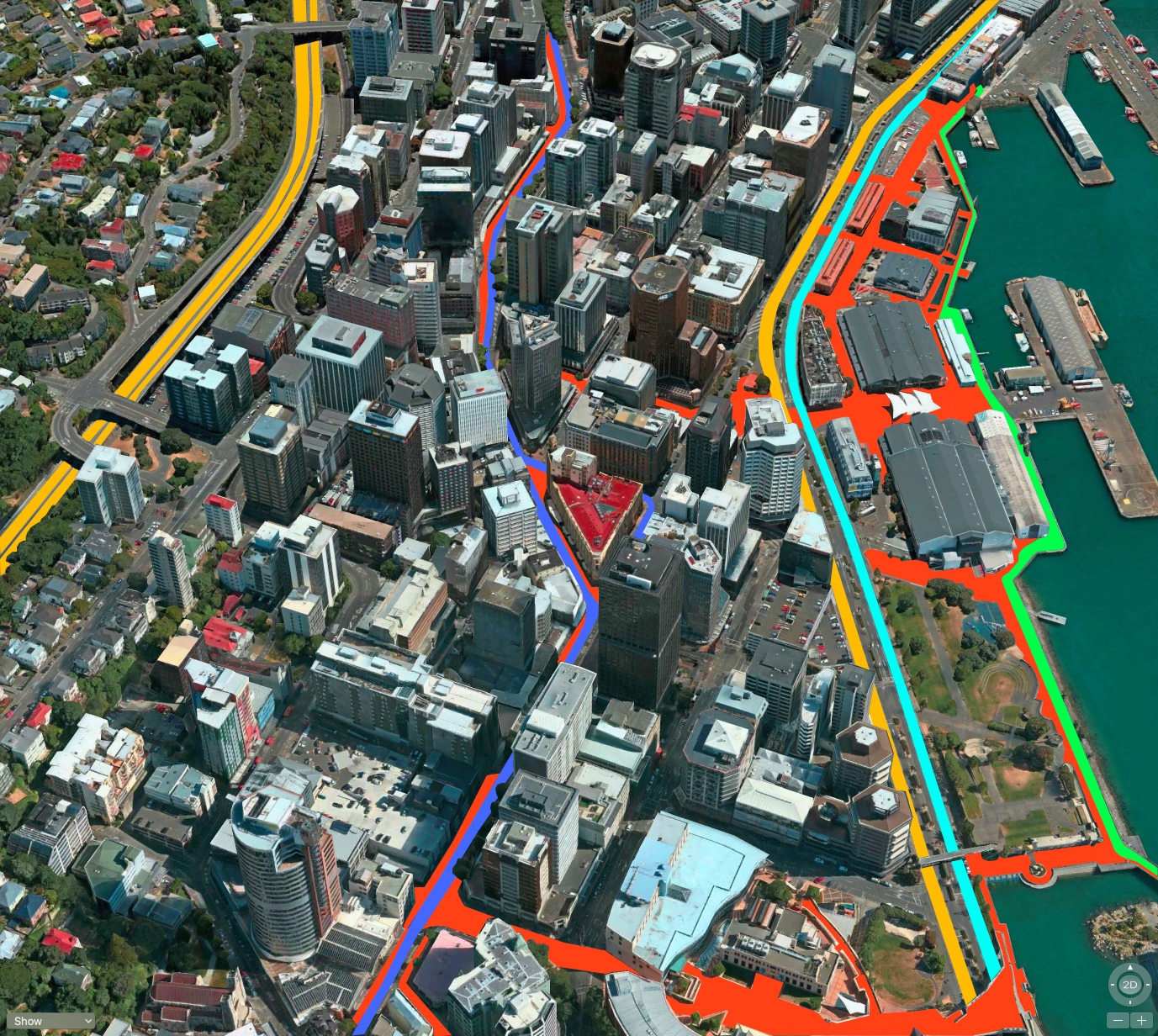 Having been looking in depth at the Airport route last week, and having already looked at the Basin area, its time now to return to Base One: the start of any Light Rail / Public Transport route at Wellington Railway Station. A lot of this has been covered off by LGWM in their document dump, which I have been pouring over for the last few days, but I still haven’t found any definitive plans in there. So, once again, I’m doing my own. Let’s see: where to start?

Everything is tied together in life, and especially in the design of a new traffic system for an entire already/existing city. We have a grand railway station where, currently, everyone gets off. Then they either walk, or get on a bus. A precious few ride off on bikes, some on electric scooters, but basically we have one giant mode change, from train to bus. And that’s a massive problem, as it involves an awkward, uncomfortable transfer, that takes time. If we want a transfer onto the new form of Rapid PT (whatever that may be) they need a better transfer method – ideally, get off at one platform and cross to the other side of the platform. London Underground, which I know best, has this on precious few stations (most transfers there require a long trek up and down stairs and narrow corridors).

Hong Kong’s MTR is so much better – well designed for the millions of people that use it. At stations such as Mong Kok and Yau Ma Tei there are simple same-platform line changes, with one set up for north-bound changes and another set up for those headed south. It is so simple and beautiful it almost makes me cry. There was a genius in charge of designing this – Roland Paoletti – and it works seamlessly, day after day. Although we don’t have the millions of bodies that HK does, there is no reason not to try and design it right, right from day one.

Those people still whimpering on that any new PT service absolutely MUST go down Lambton Quay are missing out on the point that if you do insist on that, then the buses currently going down that route will have to go away first, and you are going to risk losing passengers for good. Those who have accepted that the fastest and cleanest way is to go down the harbourside Quays have got my vote. Two lanes of traffic can be closed off in an instant and work can begin to create the Rapid PT along that route. Whether you are pushing for Trackless Trams or Light Rail, either way you are going to have to dig up the ground, divert ALL the services underneath it, and reinstate a new ‘track’. Ironically, with TT you will probably have to do more work, as it will involve making a reinforced concrete base, whereas with LR the rails sit on sleepers bedded on compacted rock: probably easier. Plus, in theory you could, like many European cities, grow grass in between the tracks.

My pick would be to have both sets of tracks (i.e. north and south) to hug the east side of the present wide boulevard, which would avoid more altercations with vehicular traffic due to less crossing points. Essential if you want your Rapid Transit to actually be rapid. So: where to start?

As Julie Andrews sang all those years ago, “Start at the very beginning, it’s a very good place to start.” Ah yes Julie mon amour – but where is the very beginning? If you say Wellington Railway Station, I do believe that you are wrong. To get a good transfer, you probably need to change over earlier – build a new station on the way in to Wellington’s final big brick pile, where those wanting to go further can easily slip out, across a platform, and onto the new super-duper-extra-calorific system of PT. I’ve shown those on the plan that there is some means of cross-exchange north of the station, it could be above ground, it could be below ground, or it could somehow link up on the same platform.

But if you believe that the current Johnsonville Line could easily be converted over to Light Rail units instead of the Matangi (as shown on my pic above as a light blue line going north) then you also need to solve the problem that the actual units really need to be 50m further east…. …so I’ve shown a simple walking route connecting the two above the tracks, although a better, waterproofed link is really needed.

I’ve spent hours working on these pics – bored, nothing else to do at work – so I hope that you appreciate the time and energy that has gone into this: heaps! It wasn’t until I finished these that I found the treasure trove of LGWM documents, where some of these issues are tackled (but not this one – or at least, I haven’t found that one yet). But hey – don’t you like the bright orange/red swamp that indicates our mainly pedestrian areas? I haven’t gone down every footpath, because, you know, life is short, but you get the idea I hope.

The official vision for LR along the Quays has it slightly different, with one track of PT on either side, meaning of course that it will be far speedier going south than going north, due to the amount of intersections it would have to cope with. That’s the bit that slows down the current trip every day – and I don’t see how they can avoid that happening here too. My scheme, of course, is so much better for that – speedy PT / LR along the east side of the Quays, but that would also have the effect of being more of a barrier to pedestrians wanting to get to / from the Harbour. You win some, you lose some. What do you think is the right solution?