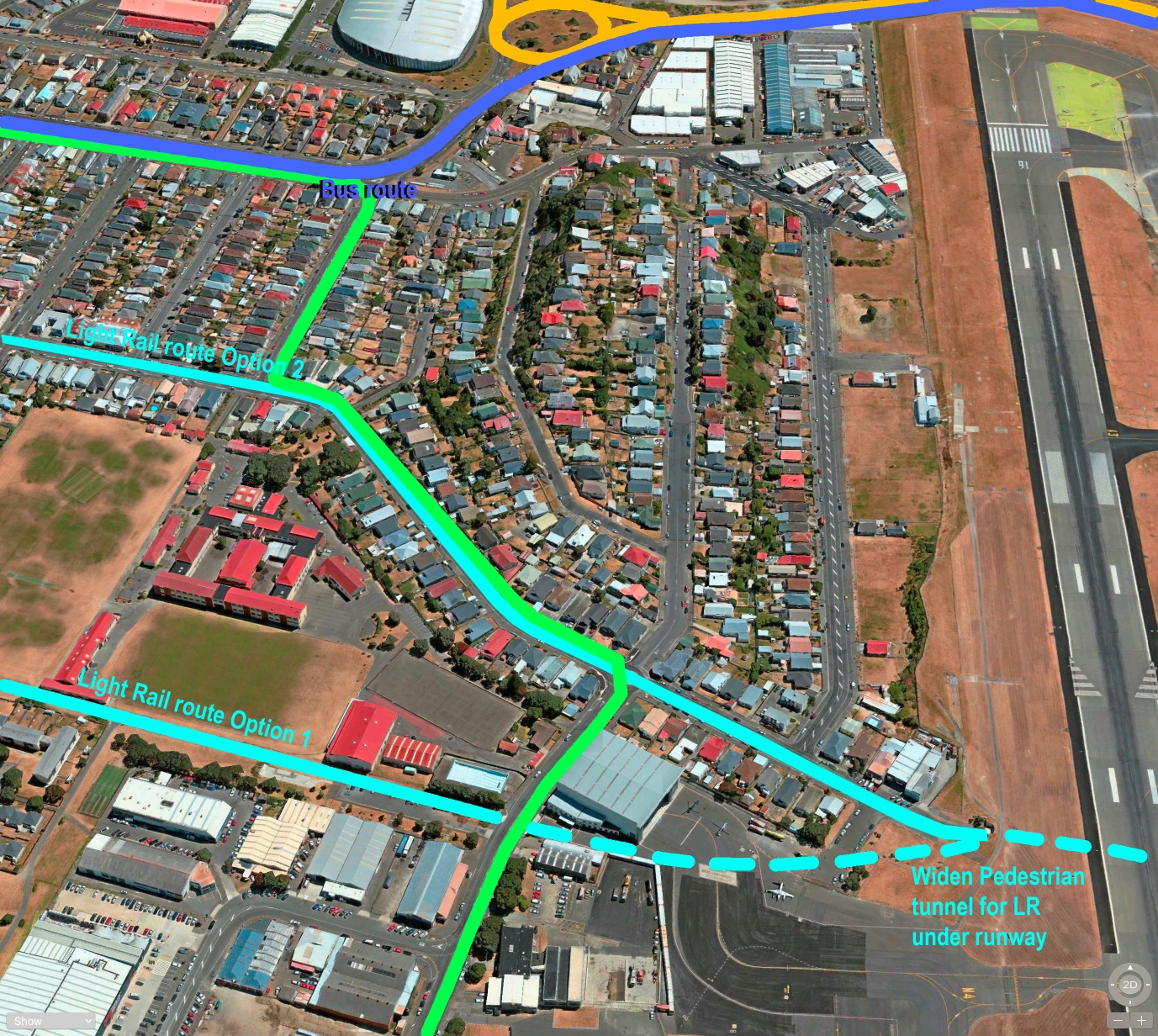 There has been interesting dialog over the past few days on the Eye of the Fish, regarding exactly how the routes out east might connect with Kilbirnie, Miramar and ultimately, the airport. I’ve been working on preparing these plans I’m publishing here for quite some time, so they date from pre-discussion times and as such, may be out of step with what others are saying. They can serve as useful discussion points.

This first image carries on from the previous post where a tunnel bursts out of the hillside at Kilbirnie, and a PT route races across the flat paddocks on the way to the airport. In this scheme, the key idea was to get to the Airport as quickly as possible, through areas of population so that the general populace can benefit as much as possible. Hence Route option 1 here continues along the current walking track and heads straight for the existing tunnel under the airport runway. Route option 2 continues down Coutts Street, follows the slight kink, and also heads for the present tunnel, which would of course have to be widened considerably.

Meanwhile, the route down Rongotai Road, shown in dark blue, seems to be what LGWM and others are pushing for. That may seem to be the easier way, but personally, I think it is full of potential pitfalls. So too, of course, is tunnelling under an existing runway – that should be perfectly possible to do so without causing any subsidence in the landing strip above – but who wants to stick their neck out and say there is no chance of failure? The slightest slump in the ground above would mean that the airport would be closed and repairs could take months – so any fault would cause the end of the airport – and Wellington – as a going concern. It should all be perfectly possible, but the nagging reminder of the hole in the tunnelling operation at Heathrow in the mid 1990s, where the Heathrow Express tunnel inadvertently created a slump under a car parking building near the airport – and the slump only stopped when the whole building had been sucked into the morass. Solution: hundreds of tonnes of Quick-setting concrete were then poured into the hole. Not a good look for the British tunnelling industry, and difficult for the miners to continue digging through a mass of concrete…

Anyway… let’s just assume that it would actually be possible to widen the existing tunnel under the airport, and that LR / PT was to follow that line of thought. The picture above shows you where the trains would come out: annoyingly, just north of the Air terminal. If this was the end of the line, then the train / tram / bendy bus / whatever would need to turn around. Of course, if it was doubled ended then the driver could get out, walk to the other end and drive of down the route they had just come in on, but that means a slow service. The faster approach is to build in a loop, and the perfect situation is as it is in Schipol Airport in the Netherlands, or Stansted Airport near London. Trains take you right to the edge of the air terminal. Honestly: that is soooooo good to travel that way. And so everyone takes the train and no-one takes a taxi. Life is much better that way.

But of course, there is another way. This sketch above, also by the Fish, shows what I believe is the route being proposed by LGWM and seconded by Betterbee yesterday. I’ve a lot of respect for the person called Betterbee, who really does know what is being talked about, so hence why I am expanding this post.

The line cruises down Rongotai Road, kinks up along Troy St, and hits the first Cobham Drive roundabout. It then follows Cobham Drive along the edge of the runway end (technically called the RESA or runway extension) and then somehow sneaks around the second Cobham Drive roundabout, before making a quick detour up to Miramar and then shooting down Hobart Street all the way back down to the Airport. In the drawing above, I’ve carefully kept to the side of the roundabouts, as the way I figure it, the last thing you want on a roundabout is a tram racing through the middle of it. However, that is exactly what is implied by the official LGWM pictures like this:

The PT system, whatever it is, is clearly going down the centre of Cobham Drive and so therefore must also be going through the centre of the roundabouts too. So I’ve drawn a line through those two too, to illustrate my point.

The route that LGWM are implying is something like this, above, as well as like this other one, below:

I don’t know about you, but in my mind, this is crazy talk. That’s a 70-80kph speed zone around these points and bringing a PT line across a busy intersection is asking for trouble. I wondered if it has been done before, ever, and to my surprise it has, although not in as high-traffic area as this.

The image above was what was planned for somewhere in Toronto, while below is a snippet of what has obviously been built in Addis Ababa.

And here is one of a TRAX tram cutting through a roundabout in Utah near Salt Lake City, so yes, this obviously can be done.

So there we are. There are evidently several ways in which we could get to the airport in time using future public transport. I’m reluctant to recommend that these ground level interactions between PT and cars go ahead, especially at roundabouts and intersections. To me, there is really only one safe way for a tram to cross an intersection; and that is to completely separate the two, like this shot of the SkyTrain in Vancouver: Your thoughts?