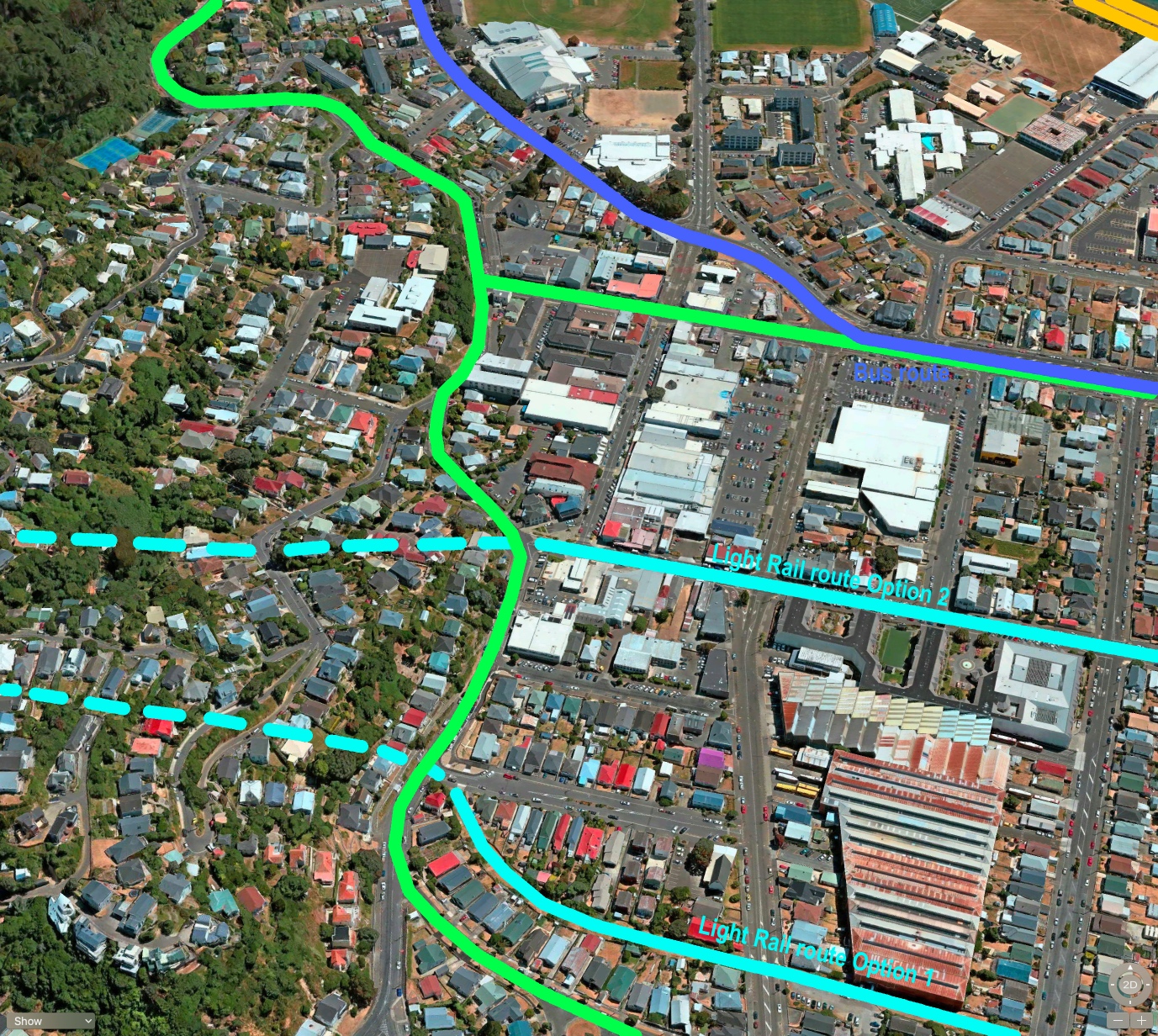 Given that everyone seems to agree that any new PT route needs to go down to Newtown to visit the Hospital (thereby removing any need for doctors, nurses and staff to have to drive to work) and then possibly the Zoo (as another main attraction) and then cross over to Kilbirnie for the large and growing population there, the Eye of the Fish decided to take a look at what may happen there.

The little diagram above is from the LGWM RPI and shows the proposed route in something like 2039. It appears to show a line going to the Zoo, a zigzag, and then off to Kilbirnie. So I’ve tried to set that out on an actual picture of Wellington, to see what effect it may have. My version below is obviously not a highly informed top secret plan – instead, it is just a meander through the woods to see what the path may entail.

In the previous post we left the PT/LR racing off to Newtown down Adelaide Road – I’m leaving out the boring bits in the middle like the Hospital (cos it is not difficult to figure that one out) and I wanted to head off further south. In the picture above, I show (with a light blue line) a possible PT route that keeps pretty straight on through Newtown and direct towards the Zoo. There are a couple of awkward 90 degree bends at the end by the park / track / Zoo, but it should be feasible enough to fit a LR line through there. After all, they have done it before when Wellington Trams ruled the suburbs. So, assuming it can get past the Zoo alright, then the only way I can see it going is through a specially built tunnel under the mountain, and out the other side, in Kilbirnie.

Obviously this part of the route is pure speculation – don’t get too excited if I have driven a Light Rail / tram-train through your house. I’m not the law, and this is just an exercise, OK? But it seems to me that there are probably three possible routes. One is shown in dark blue at the top, but in my scheme that particular route may need to stay for buses (the green is my pick for a beefed up cycle route). Instead I am proposing two possible routes – Option 1 through the current pleasant little back yard wander, named after a City Councillor who died a few years back. Leonie Gill?

It passes by the City Bus depot, which is prime for redevelopment – or possibly a new use as a Light Rail depot. Option 2 also runs past/near the City Bus depot, but on the north side rather than the south side, down Coutts St. The good thing abouts Coutts St is that it leads directly to the current pedestrian tunnel under the airport, which could be useful….

Actually – make it four routes – the LGWM team show something running along the waterfront at Evans Bay. I’d rather that we push a LR route through heavily populated areas, than zip along that windswept and deserted piece of waterfront.

If we go back and look at the LGWM plan for the future up the top of this post, they show what appears to be a route through Kilbirnie that can only be Rongotai Road and Troy Street to get up to Cobham Drive as shown in the picture directly above. That’s my green and dark blue line on the map above. The tunnel under the mountain would need to link up to Rongotai Road somehow – and not destroy all the other traffic routes surging through there like Bay Road and Onepu Road. There’s certainly enough width for twin tracks of LR running down Rongotai Road, but it seems a little crazy to me to take the LR down around the edge of the runway where we already have a very tight route.

That’s it for today. Coming soon: the trip to the Airport!