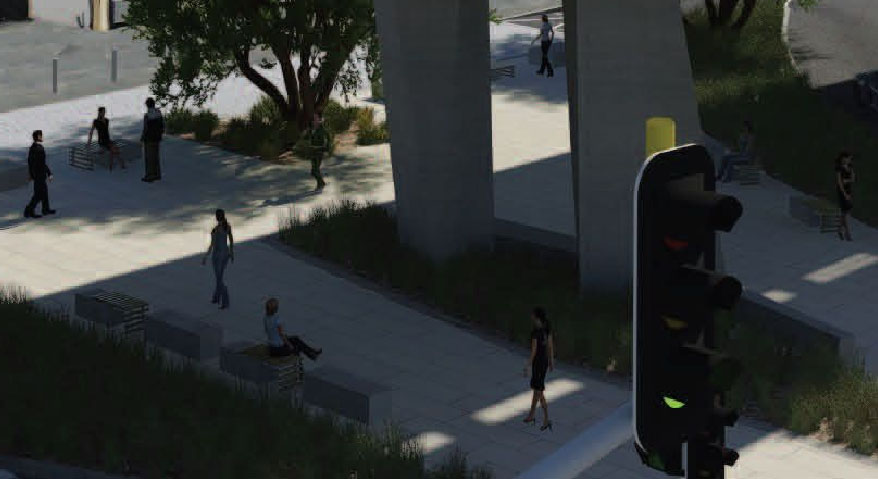 One of the curious things about the modern architectural world is the art of the computer renderer. A friend of mine once worked on a project where the computer renders of the building were surrounded by a carpark which contained only Lamborginis. This, despite the building being designed for lowly polytechnic students in a poor part of town, and highly unlikely to ever sight a single Lamborghini, let alone a whole paddock load of them.

We’ve got a similar thing going on with the latest renders of the dreaded Basin Flyover. A previous render of the “landscaping” around the columns of the Flyover and published on the front page of the Dom produced much mirth around the country for the depiction of a earnest person tanning themselves, luxuriating in the basking light of the underpass, and seemingly stripping off in the middle of the road to get some rays. You just know some spotty faced youth, with undoubted computer skills but not enough social skills to pull said bird himself, had had his way with the render, plonking in a sheila to people the render with some people doing people things.

And now, with the “additional before and after” views requested by the “very important” Board of Inquiry judge heading the board, we at last have some certified true and accurate renders of the new proposed Flyover, in all it’s obtrusive hideousness, sailing across the valley 9m above our heads. And, to be honest, totally buggering up the views of the poor buggers in the Grandstand Apartments, who used to have a grandstand view of the Grandstand, but now just have a Grandstand view of the flyover instead. Still, they’re just rich buggers, and while normally rich people get special treatment in this country, here they obviously haven’t been sucking up to JonKey enough, and so they’ve been shafted.

But the detail I especially like, if you look hard enough in the (now certified accurate) renders of the whole scene, is that there in the glooming, sits a poor sweet innocent young woman, once more pausing in the middle of the road to do something like sunbathing. Except, in this certified true case, her bench seat, and many square meters of carefully laid-out paving as well, is all cast in dark, gloomy, underpass shadow. Now, call me a cynical old stick in the mud type of Fish, but I’m willing to bet good money that this is a sight that we will never see in our lifetimes. Firstly, that we will probably never get to see anyone sunbathing under the underpass, and certainly not if it is a shady spot for most / all of the day, although I do grant you that underpasses provide nice dry places for recovering alcoholic / homeless / urban youth / crack addicts to live in many other parts of the world, and so we might have some sunbathing of the Ben Hanna style. But Secondly, that we will probably never see a nice young woman waiting under the underpass either, as that is just not a place that young ladies would wait, unless she was waiting for a quick pick up job.

Sadly, to the much-derided rendering genius / spotty faced youth that has rendered this view, not only are the people all wrong, with their happy clustering and sunbathing and all, but also the vehicles are all wrong also. If that is the sum total of the cars crossing the Flyover, then someone has sadly done their sums wrong.

We’re promised that this will be the Bridge to end all congestion. No more will cars from the Airport get clogged in traffic at the Basin, Instead they are going to be screaming across the Basin Bridge on the way for one bottle neck to the next, and the Flyover will be jam packed with thousands of cars, suspended in mid-air, not making a sound, not getting buffeted by the wind at all, and not having a care in the world as the new traffic solution will answer all their prayers. Meanwhile, a high speed, high quality public transport system whips quickly underneath them, whisking passengers along the Transport Spine route from Newtown to Centre City.

But – where are the buses? Where have all the cars gone? Why are so many people still on foot? Why has the renderer got it all so Pete Tong?
Won’t it be a bit more like this?