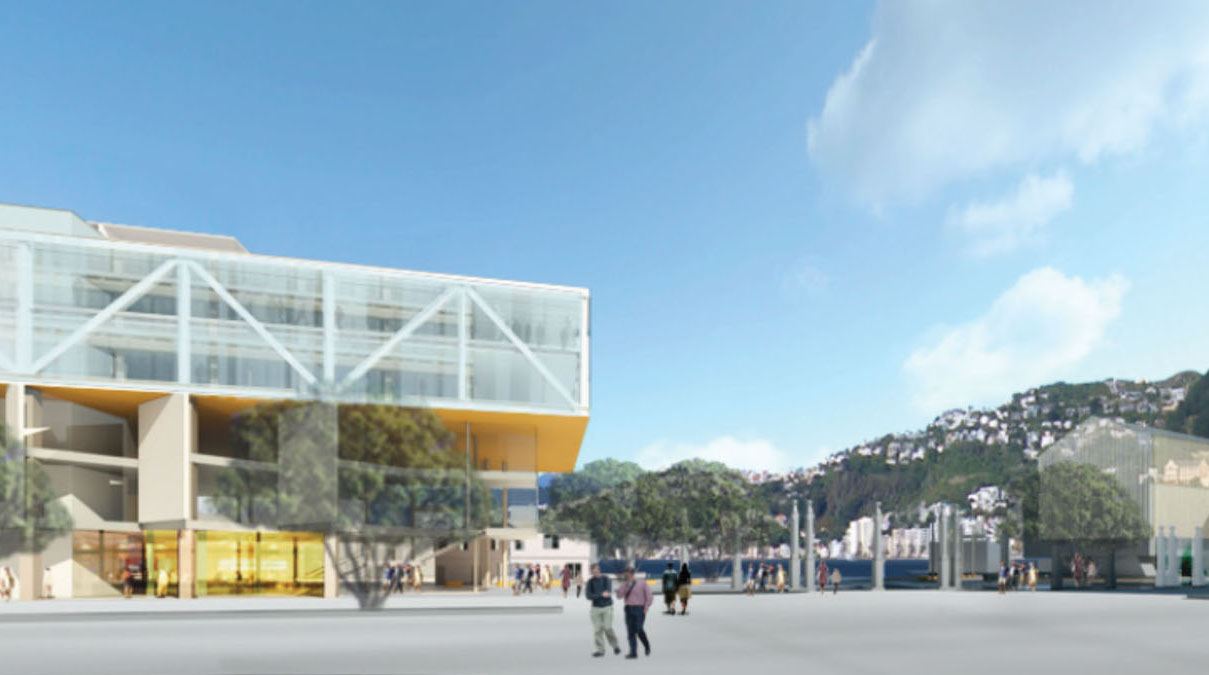 …and so the process starts again. Athfield Architects, and Willis Bond, have put in another proposal for the Site 10 site at Kumutoto, presently the site for around 40 slumbering campervans, bang slap in the middle of the waterfront. It’s not the best use of the site, although understandably quite popular for visiting tourists to have waterfront accommodation without the humungous waterfront hotel bill. WWL have tried for some time now to get all the sites sold off, to gain money for the refurbishment of the remaining parts of the waterfront. WFW, on the other hand, view it as their self-appointed, God-annointed role to rule over the waterfront and stop anything other than grass from growing there.

The latest proposed addition, is a curiously truncated version of Athfield Architect’s previous competition-winning triumverate of parts for the waterfront. A recap, with links. We wrote about it here and also over here – it is so long ago, that even though the Fish has been going for 6 years now, the main discussion was held on a previous blog-site WellUrban. So, despite it being nearly 2014, we’ve transformed ourselves back in time to 2008. Examples from a conversation there:
WellUrban said:
Kumutoto:
Option A: Some interesting geometry, but the architecture is not compelling enough to make up for its urbanist shortcomings.
Option B: Bold and inspiring, but wildly impractical for the climate.
Option C: Cheeky and potentially iconic, but perhaps derivative and definitely a political minefield.
Option D: Quirkily appealing at Site 8, handsome and urban at Site 9, but unconvincing at Site 10.
Option E: Some interesting deviations from the brief, but impractical and overscaled.
Option F: Striking design and inventive spaces at Site 8, pleasant and practical at Site 9, and quietly innovative at Site 10.

A certain Maximus noted at the time that:
I think that many of the schemes could quite simply incorporate an indoor sports centre into the ground floor – and i am sure that if the architects were asked to incorporate it, or wihdraw their schemes, then all objections would miraculously be withdrawn.
Let’s face it: the ground floor of site 10 is not really suitable for retail, especially on the road side. Its a big, wide, smelly, fast, steaming motorway, and there ain’t no-one going to be looking for a new frock down there. But a big glass wall into a thriving sports centre (think of Auckland Uni’s Rec Centre – one of the most interesting bits of Auckland’s otherwise mediocre urban landscape). Now that’d be good !

To which the WellUrban reply was:
Maximus: I certainly agree that in terms of location, Site 10 would be better for indoor sports than for retail. However, to replace not just Shed 1 but Shed 6 as well, a huge and relatively uninterrupted section of the ground floor would be required. All of the entries divided up the ground floor with lobbies, atria, parking and ramps to the extent that getting even two courts, let alone the three required, would be nearly impossible. I don’t know how much flexibility the various structures would offer, but I hope that indoor sports could somehow be incorporated there.

I wonder if anyone will ever take hold of that suggestion? It has wings – it can fly! Sponsorship of the ground floor by Red Bull perhaps?

Interestingly, of course, the Athfield scheme was selected (Option A above), and then the potential tenant hated it and the whole thing was abandoned. A few years later, a different developer teamed up (with Studio Pacific Architecture if I recall correctly), and proposed a very different building – just for Site 10. No-one has dared to seriously put forward buildings for sites 8 and 9 recently…. The StudPac building was like a giant toasted waffle – crunchy pattern on the outside, and probably lots of jam on the inside. We wrote about it here, and there is a good back-history there as well.

Of course, that proposal was taken to the Environment Court, once again, the ever-present Swan stuck her beak in, and the building was unceremoniously thrown out. Then, limbo ensued. Car-parks and camper-vans abound.

So what is the new proposal like? Well, basically, much like the previous Athfield design on first look, but a couple of floors smaller. Smaller, but maybe not small enough? It still goes through the Environment Court’s recommended maximum building height for that site, and that’s going to be a stiff arguing point once more. Waterfront Watch may have the spirit to get excited about the extra floor, but has anyone else? There’s some small discussion going on at the DomPost, and a reasoned discussion going on at the Scoop site.

I can’t find any good images of the proposals anywhere yet though – Scoop has published two tiny images, .
Update: Luckily, a helpful PR person at a local government has sent us through some better quality pics. But we still need more! Athfields – want to email us some plans to: contact @ eyeofthefish.org ? That’s be grand thanks!

And of course there is this:

In terms of words, so far I’ve found this:

A six-storey office building, the appearance of which will be broken into two primary horizontal forms.
A ground-floor public pedestrian link through the middle of the building, connecting Waterloo Quay with the harbour.
A colonnade providing a sheltered walkway from the Whitmore St gates to the railway station.
A large glazed three-storey space with a civic portico that overlooks the Whitmore Plaza.
A publicly accessible ground floor, which will include shops, cafes and bars, as well as office space.
The potential for a publicly accessible rooftop restaurant and roof garden overlooking the harbour.