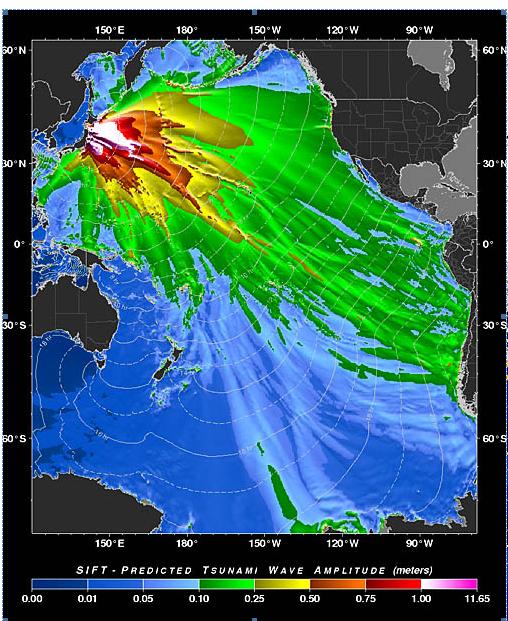 The bad news just never stops, does it, while you’re connected to the global media. The world grows ever smaller: I got texted from the UK for me to watch out for tsunami, before I had heard from NZ media. It was truly chilling to watch the footage from Japan, with that slow moving wave destroy all before it: an evil black slug, devouring all the greenhouses before it, encrusted with new Toyotas and even more bizarrely, houses bursting into flames and then being carried along in the wreckage, still burning. Topped off with threat of multiple nuclear reactors shutting down, and, I guess, a remote chance of them exploding. As far as means of destruction goes, that has to be up there with the worst of times. Biblical in its destruction: all they need now is a plague of giant locusts to really make their day.

I’ve previously written on my attitude to Tsunami before – almost exactly a year ago, after the last great tsunami off the coast of Chile – and I got told off quite firmly by some of the commenters here that I was being irresponsible and frivolous for ignoring the threat. Yes, I went swimming then, and will do so again today – there was no risk to New Zealand. Here it is last time from Chile:

and here it is this time, as forecast from Japan. This time, clearly, the tsunami was real : devastating to Japan.

While the “surge” of water here in NZ was a full 50% higher than before, being 15cm in Wellington as opposed to 10cm the last time, I’d still maintain that a common-sense approach is that something on the other side of the world will have lost most of its energy by the time it gets fans out and spreads to the other half of the globe. The bar along the bottom of the graph shows the true story – the purple and white part off the coast of Japan has waves of up to 11-12metres high, but the next grade down, red, has falledn to only a single metre, and by the time the remnants of the wave gets to NZ, its barely rating 10-20cm high. Fast, but piffling: and to be honest, not really an issue in NZ.

However, it’s clearly not just the Earthquakes we have to worry about here. Maybe it is time to look a little more fully at the risks in Wellington. Taken from the Wellington Regional Council’s hazard map we refered you to in a previous post, here is a highly enlarged picture of the threat to Wellington from various hazards, with first up: Tsunami:

That’ll make you not want to live in Lyall Bay, Evans Bay, Seatoun, or anywhere in the refurbished down town.

Being as our landmass here is either hilly or reclaimed from the sea, we’ve also got extreme threats from Liquefaction:

Once again, the foreshore in Wellington, and the reclaimed land at Rongotai all get a hammering.

Most of of course we concern ourselves with Seismic shaking:

No good news here: we take a hammering all over. Maybe up on the hills is better. Mt Victoria looks nice and safe – perhaps I’ll move to Haitaitai, or Mount Cook.

Which of course can then set off catastrophic landslips on the sides of hillsides:

Oh damn, spoke too soon: change that to the very tops of the hills, and avoid the sides. Of course, that means you only have hurricane strength winds to cope with then.

And if we puta ll those risks together, which the nice people at GWRC have done, then combined, they all look like this to the north of the city:

Following on from that, here’s the south of the city. Purple is low risk, green is average, red, as always, means hot and nasty.

And if you live in the Hutt, here’s a couple of things to really cheer you up:
The Hazard map for Huttites, and a profile of a 440 year flood.