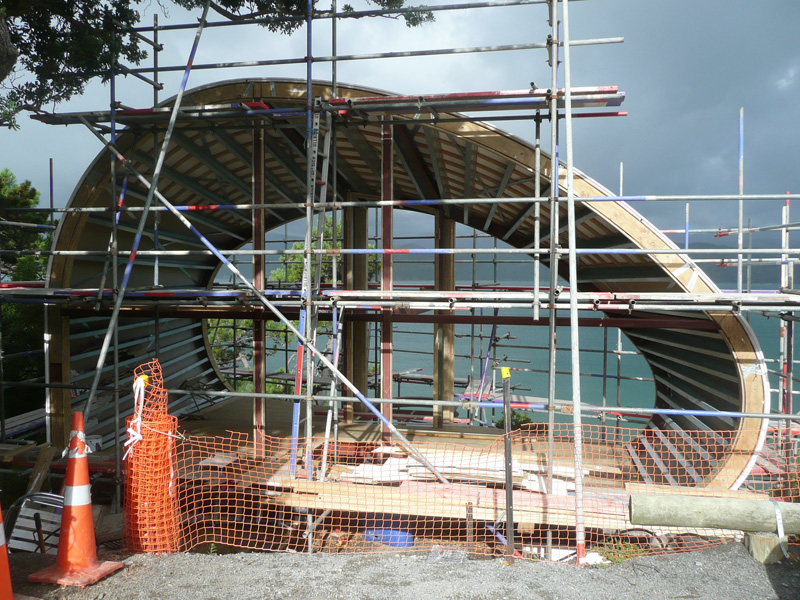 High upon a hill, overlooking a glassy harbour, sits an architectural marvel in the making. Captured here only a week or so ago, before the calamitous events of quaking ground befell us on both sides of the globe, someone, somehow, is creating a slice of heaven. Well, perhaps not so much heaven, as a leg of lamb, or a carefully glowing white ovoid shape, with promise galore.

The jungle drums of architecture land have been beating wildly lately, but this particular song has not come to the attention of the Fish – we had to go out into the wild Wellington suburban landscape, track this one down, snare it with our mighty telephoto lens, and then serve it up here for your delectation. Nom, nom, nom – it’s absolutely tasty.

After all the gloom and doom of the destruction north and south, after the idiot utterances of demolition-crazed digger drivers and politicians intent on tearing things down, it’s truly wonderful to yours truly to see this particular construction on the way up. If it is your project – we’d love to hear from you. It is not showing any particular leanings towards any particular style of any particular architect around town that we know of at the Fish, so all we can do is presume that this is some great new adventure form some previously hidden talent – so write to us, whoever you are, and let us in on the secret.

For the last 10-20 years, architects have been doing the boxy thing. Yes, it was all very clever once, but really: I’m over it, even when it is done really really well. But this is a new move away form boxy into something more organic, more wild 60s acid trip, more Flash Gordon and the house of the Future. It’s got the potential to be Austin Powers but without the bad teeth and the monster nose. It is, I’m happy to say, shagadelic.

While it looks so ethereally eggy, poised in the slipstream, wind wafting through, in reality it is not going to stay as beautifully hollow and shell-like as it is now. There is, of course, every chance that the designer or builder could yet stuff this one up with poor detailing. The crisp white shell will stay in its pristine, virginal state, but the aperture that we see through will be filled shortly with wall, and I’m guessing that while it will be all glass out to the view, the street will get a more blanked out facade. The mechanics of adhering a sliced egg to the side of a crumbling hillside deserve a medal in itself – and the sheer chutzpah and ribald bravura of the project gets my vote for a gold medal at the Olympics any day.

I’ve got to say – I’m absolutely chuffed. If this isn’t the lovechild of Austin Powers and Ming the Merciless, then I’ll eat my hat.