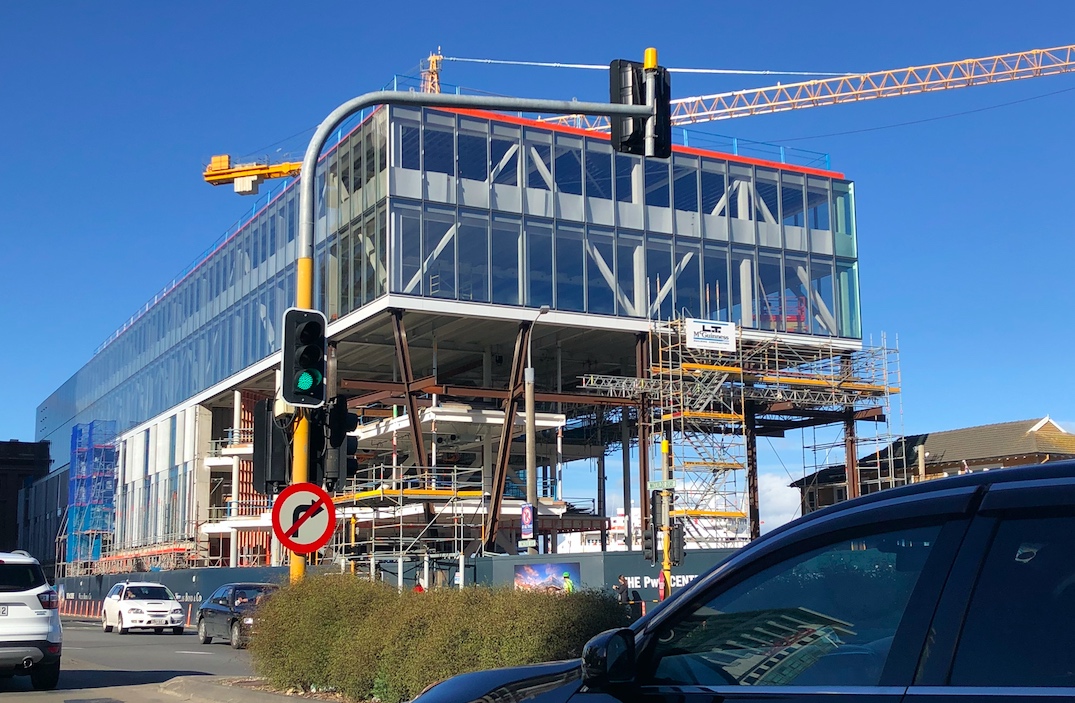 After what seems like the longest of times, the new building for PWC on Site 10 at Kumutoto (by Athfield Architects) is now progressing well. Strong advances on the cladding front, with the end of the cantilever now glazed and looking reasonably interesting, with the massive braced cantilevered box projecting out above the south end of the building. The top two floors are expressed as a single long glazed structure, spanning from one end of the building to the other. The rusty brown angled legs in the photo are presumably temporary support props, to be taken away one day so the entire structure can proudly stand, support-free. The steel framework for the hanging, suspended rooms at level 2 is being installed as well – presumably to showcase an even more transparent glass suspended box. Watch this space!

I’ve been following the progress of this building for a while now and it is clear that the engineers (Dunning Thornton?) are taking no chances with this waterfront structure. After all, it is extreeeeeeemly close to the water’s edge, and we know what happened to buildings out on Centreport land – and to the edge of Centreport itself – containers toppling into the sea etc, cranes out of action, reclaimed land subsiding and turning to jelly, several buildings needing to be demolished etc, so no one is keen on that happening here, or indeed anywhere, ever again. Consequently, the building is base isolated: basically, the basement is like a giant bathtub, with some car parking and service rooms scattered throughout the depths. Many deep piles have been drilled and a fairly large amount of concrete has been installed deep down into the basement structure, with the new building then sitting / floating on another structure above the lead / steel / rubber bearings. Way back in December 2016, I took this photo of the basement construction, where you can see the basement slab:

I’m picking that base isolation will be the new must-have in Wellington – indeed, will we ever see another office building built without it? My guess is that it will become, almost de facto, an imperative. Property owners, property developers and Wellingtonians alike are absolutely over the whole “will my building fall down?” thing. From now on, I’m guessing that Government, if not exactly mandating it, will certainly be only renting from developers who can guarantee that their commercial buildings will stand up and remain in good working order after an earthquake. And that means, as far as we know, base isolation.

Therefore, you’ll not have the sky falling on your head in this building, nor any ceiling tiles or ceiling mounted services either. This building should be safe, because after all, it will be housing the most important people in our society: accountants. Yes, bean counters are all that can afford this exorbitant structure, and despite that their profession is getting eaten up by Xero, apparently they can still afford luxurious waterside offices.

Here is the prow of the ship under under construction a few months back:

We do know is that there will be no public viewing platform from the top, thanks to the achievements of Waterfront Watch, who loudly proclaimed to the Environment Court that it was too tall, and who subsequently got the public floor removed. There has also been no mention of the ground floor space that was going to be open space for the public – I think the developer got pissed off and just deleted all the elements that said “public” on the building. Great going WW, great going… As far as can be seen from the plans, the building will now have little or no public access – unless of course you pay for it, in a restaurant or cafe. Really, another floor, only for public use as a viewing platform (and as was proposed by the developers before getting sued by Waterfront Watch), would have been a marvellous asset to Wellington. So too would have been the large ground floor space at the south end, noted at one stage as “Wellington’s living room” – now no longer shown on the plans.

But there are questions worth asking. Is it an eyesore, as Waterfront Watchers still endlessly complain? Does it create a canyon of buildings down Customhouse Quay, as claimed by Lindsay Shelton over on Wellington Scoop? Will that viewshaft underneath still work, framing the view through to the old ferry building, with half a building hovering above ground, floating above the old weatherboard cottage? Or is it, as Lindsay says, an:
“…enormous new building that is walling off the city from the harbour on Waterloo Quay opposite NZ Post House. So different from the skilfully fragile image (below) released by Willis Bond when they were seeking city council approval.”

So: skilfully fragile, or a behemoth? Is this Athfield Architects building a thing of beauty, or is it just a collection of mumbled and jumbled forms, with uncomfortable proportions and cantilevers? Too early to tell that yet, but we do know some things. There are a number of precast concrete wall panels lower down on the building, in the centre (shielding the functional areas?) while the top floors are more glass-clad, to maximise the view (yes, the view that we the public will never get to see, but those all-important accountants will now spend all day looking out at). Some panels are flat, while near the south end the rooms zigzag in and out, providing a ripple of views down the side, in a pattern which will probably make more sense when complete.

On the east side the cladding is different again – mostly all glazed, and facing just far enough away from north that they will probably need no shading. Great views out over the harbour – and to a certain extent, the old tin shed that was used a decade ago for the Top Cat ferry – none too exciting an outlook. I suspect that someone will mysteriously find a reason to delete this building before too long. From inside, the building is certainly going to be stunning. From outside? I’ll wait and see when it is finished. What do you think?

No bridge nor tunnel