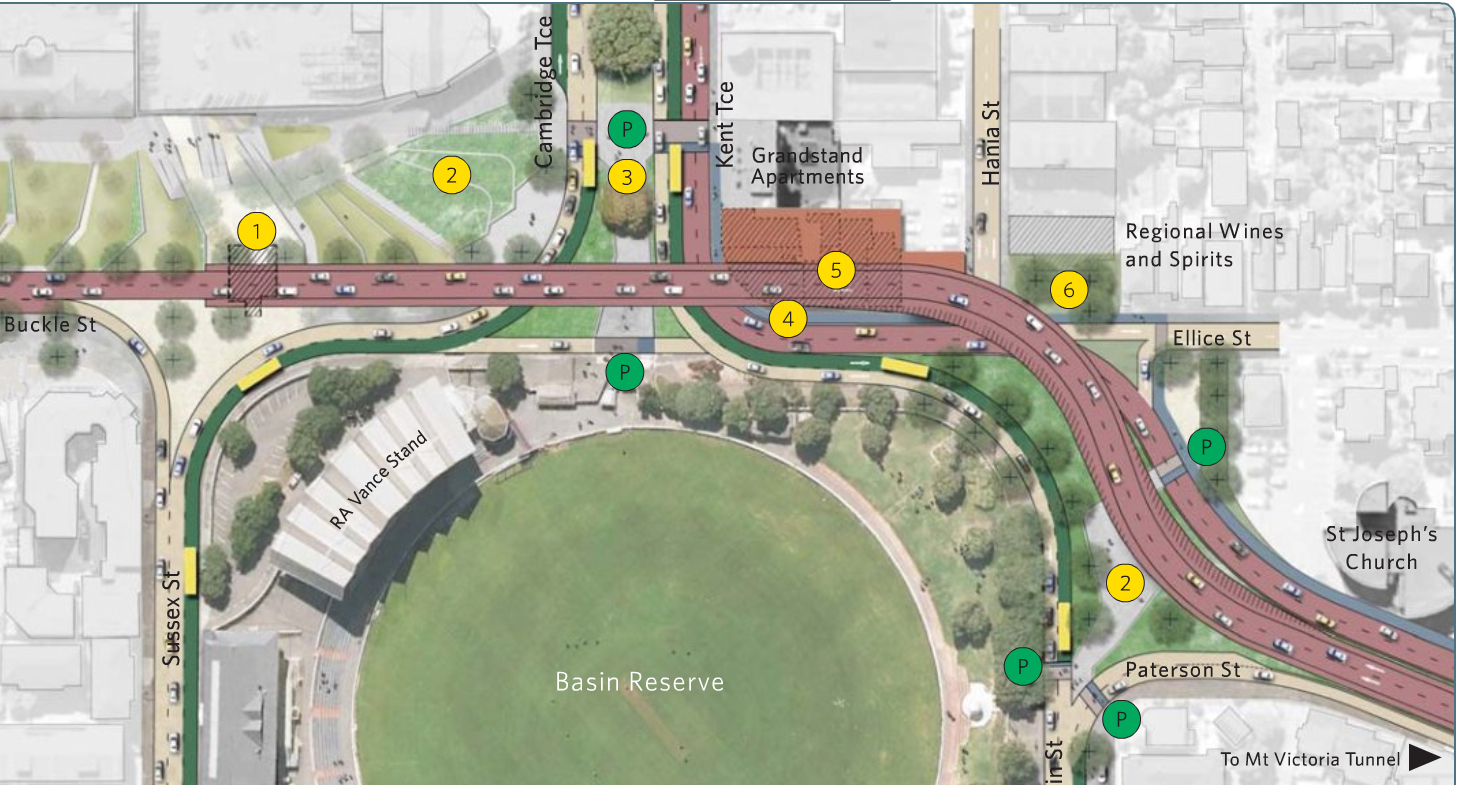 A Fish goes away for the weekend to get some peace and quiet, and all hell breaks loose – has this town gone crazy? Happy Fourth of July indeed! Five minutes off is all I ask for – and in the mean time a city gets landed with two options for a great snaking python of concrete slithering around the park, the natives gird their loins and plan to storm the bastilles of the authorities in revenge, and residents of a certain apartment block remain aghast at the prospect of being sideswiped by an errant overpass. It’s worse than Hone Harawira calling parliament a bunch of white mothers, which is wrong of course because they’re mainly fathers. Even Happy Feet the Emperor penguin has been heard calling vocally from his icy cell something that sounded suspiciously like “Overpass My Ass” although of course I couldn’t quite be sure because of the strong southern accent. I hear he’s even gone on hunger strike, and refuses to eat any more sand until this whole debacle has blown over.

Yes, I am talking about the plans for the euphemistically titled “Improvements to the Basin Reserve”, otherwise known as Overpass Option One or Overpass Option Two. Here they are below: just the top portion shown here, cos that’s where all the action is:

That’s the “preferred” option, seeing as it is simpler, cheaper, and straighter than the second one, which in reality no one in their right mind would want to see tootling through the city.

“Weâ€™re also considering the option of adding a pedestrian and cycle facility to the bridge, which would cost about $8 million. Pedestrians and cyclists will still be able to use the streets under the bridge, so we have to decide whether providing this alternative facility justifies the expense.”

We are however offered a choice with our choice – do you want cycle-lanes and footpaths with that? Well, do you, punk?

Here’s option two, the wild card option. That’s cos it will make anyone in the “Grandstand” apartment block a bit wild….

Now seriously, that’s just being silly. Does anyone really expect anyone on the planet to vote for that one, except perhaps five old men at the Cricket ground? The chances of a giant snaking roadway like that, completely alien to Wellington’s topography, and racing between buildings like a bad mash-up of Blade Runner and Metropolis, is really just a non-starter. But, like Jeremy Paxman on a roll at University Challenge, “I’ve started, so I’ll finish”. The roading bods at sorry NZTA (still can’t get used to it) have clearly stuck this ugly monkey in as the pig in a poke, the Claytons choice, the Overpass you vote against so that they get the Overpass they want to.

So: one choice that narrowly skirts the hemline of the Basin Reserve, with the dull roar of traffic just drowning out the gentle thwack of willow on leather. The other choice that is not a choice at all. Both of them are scraping gently against the concrete walls of the St Joseph’s church, the powerful roar of the mighty Prius taxi drowning out the Word of God. Bad luck to the Catholics for building that side of the ditch. Now I have nothing against a good high-rising, narrowly skirting, gently scraping piece of urban knitting, but this seems like the petrol-headed boffins down at NZTA have been sniffing more than just the exhaust of a 69 Monaro. They’ve had their noses firmly pressed to the flanges of the lake pipes of a fully modified Funny car about to snare off down the Meremere back straights, and swallowed a little too much of the nitrous oxide to be fully functioning in the modern world.

There are of course many other choices, unshown here. Deep in the bowels of the NZTA reports come the news that other options were considered – but they’re not really telling you what they are:

“We considered building a tunnel around the Basin Reserve. However, because it had to extend between Paterson and Taranaki Streets to be viable, it would have been significantly more expensive to build than a bridge. The tunnel construction would also have been difficult given the need to build it in an old swamp. We also considered street-level options. However, while they were cheaper than a bridge they provided fewer benefits and were not as good as a bridge in separating SH1 traffic from local traffic, particularly buses and possible light rail. We believe the bridge will best meet the needs of future generations, particularly if they want to upgrade the Inner City Bypass.”

“We also considered”… Now that’s not very reasonable at all. In my job, if we did a report that said there were other options, but we’re not going to tell you about them, or report and compare their advantages, disadvantages, costs etc, I’d be down the road without so much as a second glance. The same should go for NZTA. I think that the first thing you should all do is send in a submission straight away to the NZTA and say:
“No Way, Over-Passe.
I vote for Neither of the two options presented.
I demand to see a Full and Fair evaluation of all the other schemes that you have had for the last 2-3 years.”
Hell, 5-10 years even. How long has this beast been in the back cupboard – which century did these guys crawl out from under? Once we’ve got the other options on the table, and the cost basis comparison stripped back and laying bare on the slab, only then will we pick over the bones of these two. We’re waiting for the Community vision fight back scheme – the Overpass that you (quite simply) Don’t Have. It’ll come from somewhere, of that I’m sure.

Let’s move on, shall we?

What about this tunnel then? This second, proposed Mt Victoria tunnel? Because, let’s face it, the works to the Basin make absolutely no sense unless the 2nd tunnel is drilled at the same time. “Solving congestion” in one spot and then allowing it to choke up again a mere 100m away is a kind of no-brainer – ie the kind of thing only someone with no brain would do. So, seeing as the boffins at NZTA are clever chaps and chapesses, they’ve provided the plans for a second tunnel as well. Here it goes IN, on the city side of Mt Victoria:

Yes, I thought you’d like that one. They seem to have taken to heart my suggestions that one tunnel go in above the other, except that even here they got it wrong: the new tunnel should go LOWER down the mountain than the old one, so that you don’t have to destroy so many houses / lives / neighbourhoods along the way. What seems to have been drawn here is something deliberately vindictive – targeting every house they can, and taking out the approach road to the local schools that cluster around this portal.

I might gnaw over this bone some more another day, but for now I’ll finish off this post with a simple showing of it coming OUT the other end of the tunnel: the return of the Haitaitai Thai Tie. Clue: its really a Knot. Or a Not. Whatever: here it is:

I’ve kept the picture size high so you can see it clearly – the yellow dots etc are from the NZTA website, so you can pick up the notable features. There’s information on their website if you should want to know more about these points. But I think you can probably see quite clearly enough what is planned to happen here. There is a nice simple path going from the new tunnel’s pedestrian / cycling route, right up to the edge of Haitaitai. This continues off down Ruahine St, which is currently just one way each way, and is now due to be two to three lanes each way – yes, Three. We’re not sure why. Future proofing, no doubt. Guess why: because traffic on this route is due to climb by 80%, according to NZTA predictions. Eighty per cent. Can you believe that ? Not sure that I can.

Coming soon: Ruahine Street and Wellington Road – abandon hope all ye who enter here. Or – is it really all that bad? in the mean time, let’s talk Basins and tunnels. What do you think?

Other side of the Mountain