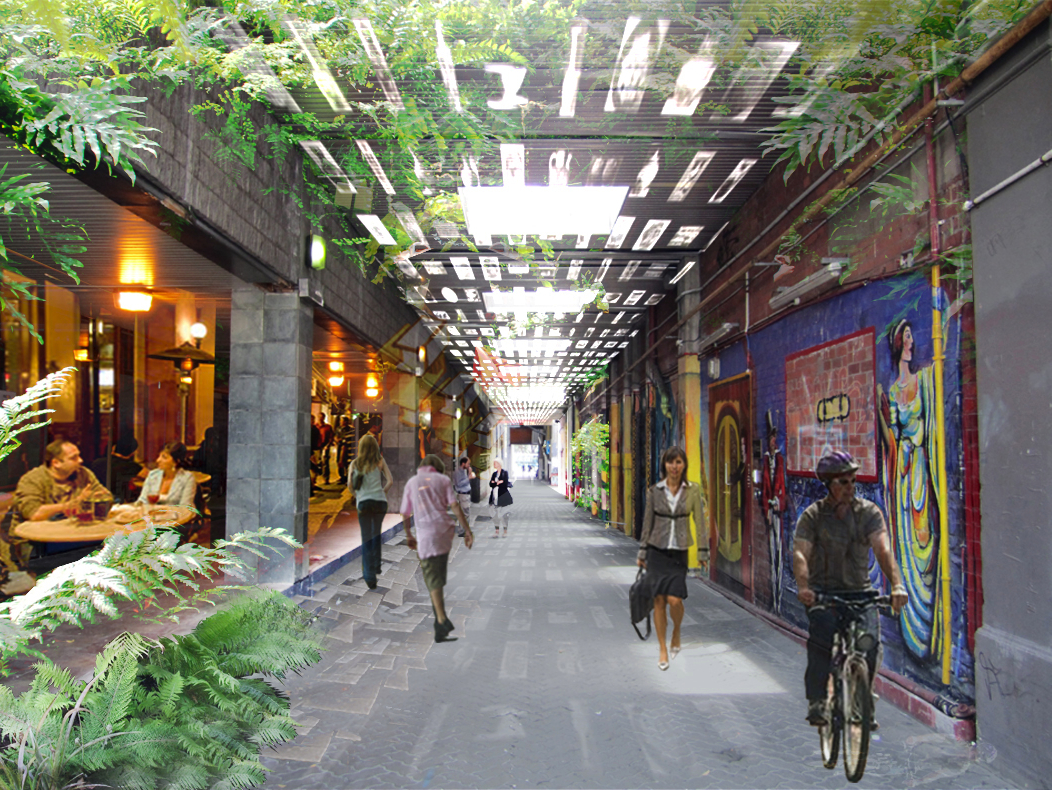 In the second of a series of posts on the proposals of Wellington 2040’s vision, we thought we should look at the concept of Laneways. The picture chosen to illustrate this is the refurbishment of Opera House Lane, which sort of ties in with our previous post – and shows the “after” picture of how the Lane could be. I don’t have a picture of the Lane in its present condition, and I suspect that we don’t need it: we all know how horrible it is. Unpleasant is too mild a word.

The Lane exists at present of course, but is made particularly unpalatable by the preponderance of smokers to smoke there, of urinators to urinate there, of muggers to mug there (at least that’s how it feels), and certainly of taggers to tag there. As evidenced by the visual, what would make this whole Lane experience nicer is to have shops and cafes opening out onto the footpath of the Lane – an admirable and noble intention, and a far better use of the ground space of the building recently vacated by the Tax Department and the shoe shop. What it needs of course is a whole mess more of people, in real life, and what that implies is that there are lots of people here going to and fro – ie both to the waterfront and back to the Te Aro Park.

These images from the Council are an interesting series – far from the usual sophisticated Stantial Studio images favoured by Athfield Architects and others, the Council images are roughly built Photoshop mashups, most of them featuring this slightly dorky guy on a bicycle, or Miley Cyrus going for a jog. She gets around, that woman. There’s also a slightly drunken guy in a pink shirt who is stumbling, about to trip up on the crazy paving on his way into the inviting pub that nestles halfway down the lane. But this mashup sensibility works well here, with the existing mural on the wall of the Opera House still visible, and the out-dated plastic bubble roof down the lane replaced with a series of slightly broken slats letting in the wind, rain, and occasional shafts of sunlight. In return, lush creepers grow up the wall, entangle themselves along the ceiling, and climb out into the sun.

The Laneways idea is obviously drawn from the situation in Melbourne, , where they have transformed Melbourne into an art-form of urban design. Here’s some snaps of the Laneways in Melbourne, including this one taken just a couple of years ago by the bloggers (Tara and Jeremy) quoted below (I like this one particularly because there is a shop called Fish, just down from Kinky Gerlinki):

A blog written by “an American living in Australia” notes the origin of the lane and its current form:
“Laneways here are what we might call alleys back home, although they are certainly more than places to drop off deliveries and leave your trash. Melbourneâ€™s laneways are the result of the city centre grid being designed with broad streets, wide enough to accommodate goods hauled by cattle teams. The people actually living and doing business in the city, however, started to create new access ways to avoid the wide and chaotic streets. Thus the laneway system was developed and became an indelible part of Melbourneâ€™s urban form….. It wasnâ€™t until the 1980s that the city began to appreciate what the laneways could offer and efforts to revitalize them began. As you can see from exploring the network, the efforts worked, because now the laneways are certainly one of the most delightful things about Melbourne. Compared to the main thoroughfares in the CBD theyâ€™re more subtle, charming, unexpected, intimate and artistic. Many have their own aesthetic and personality. In the days you can wander around and appreciate the street art (much of it commissioned or at least condoned by the city) and shop in boutique shops, and at night you can duck into an inconspicuous restaurant or bar.”

Well that is precisely what we want to have here as well, so all credit to the Australian architects and Kiwi Urban Designers that have been working on the bulk of the report (due out next week I believe). Here’s another photo, from a Laneway during the recent music festival there, where it is filled up to the brim (including with those nasty smokers), and almost to the point of over-flowing:

But I think that the Council probably have a more “nice” corporate image of what the Laneway could be, including “nice” people having lunch in nice shops and cafes. Like this perhaps:

But there is of course another side to Laneways, and that is their well-known affliction / predeliction for Graffiti. Some good, some bad, some excellent. Some shown right here….

If you’re interested, there is a good article on the origin of the current laneway street-art scene, from The Age in 2004 here. Of course, this is at odds with the recent actions of the WCC, where they recently closed off and painted over Wellington’s only existing laneway. Not a good start really, although that was a particularly narrow, particularly smelly little alley. Let’s see if we can make this one work a little better!

The Age article notes that Melbourne “supports the local art scene by offering a number of grants as part of its Public Art Program and Melbourne’s Laneway Commissions, which are aimed at brightening up the nooks and crannies of the city that are home to so many restaurants, galleries and bars. “The laneways are Melbourne’s hidden treasures and these artworks enrich and enliven them,” Lord Mayor John So said at the June launch. “These artworks turn Melbourne’s humble lanes into a forum for comment, questioning and enchantment.”

And blossom it has. The Laneways in Melbourne are now home to a well-attended Fashion Festival as well as the Music Festivals. It’s a wonder that anyone is left to walk the main streets of Melbourne, given that so many hipsters appear to be hanging out down the side streets.

Roll on the roll out of the Lane Way! Can we make this happen soon? Like, perhaps, by Christmas 2011?