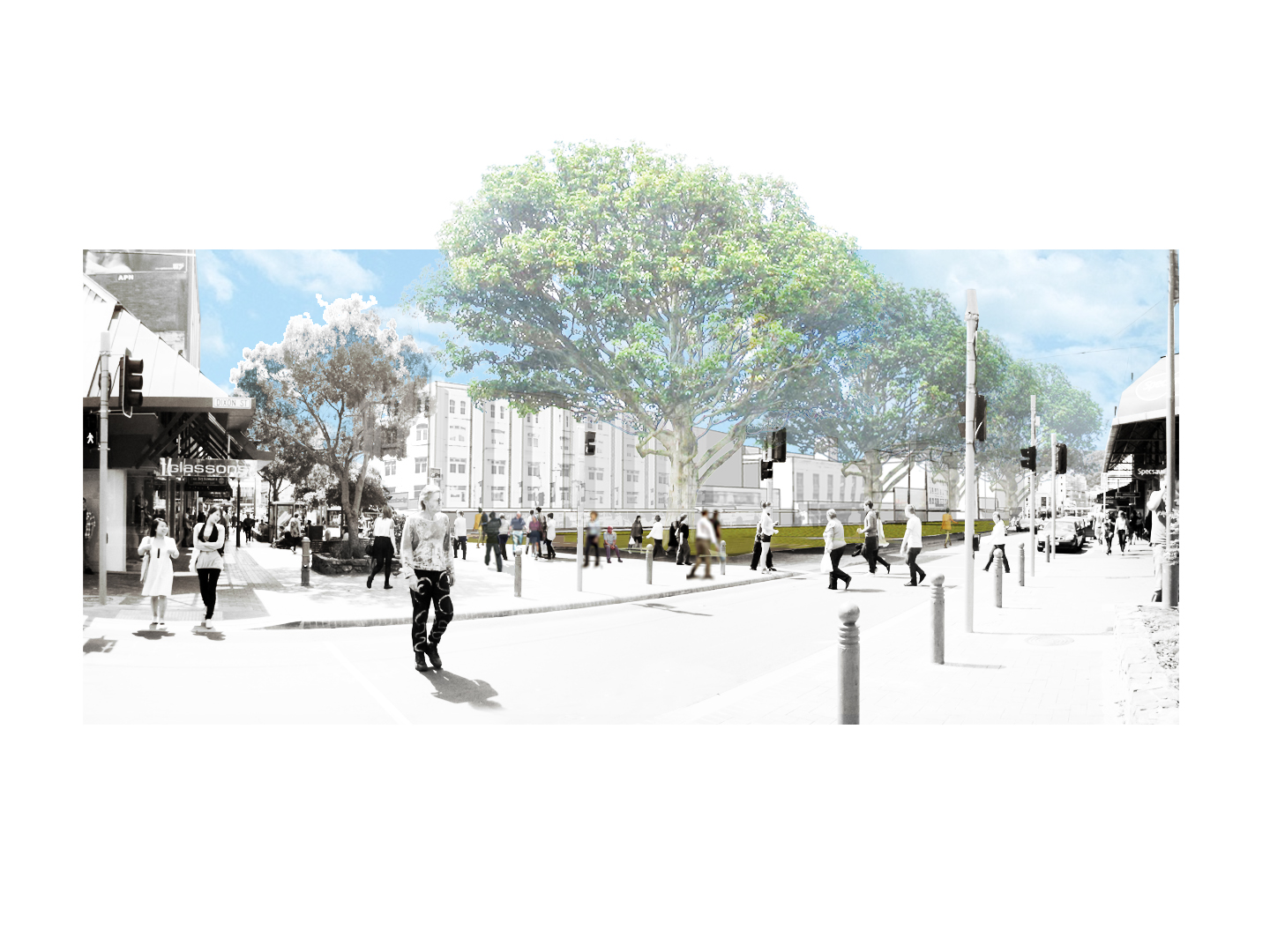 With a brief flurry of media attention last week, and typical fluffy media attention more on Miley Cyrus than the ideas inside, the Wellington 2040 vision was confirmed by a Council meeting. Today, there will be the opening of two container consultation stations (one in Te Aro Park and one on the Waterfront?) which will unveil some of the report. And finally, next week, the public may get a chance to really see what has been proposed.

Seeing as the Eye of the Fish is not yet a fully-certified media channel, we haven’t been able to get to the fully monty report just yet – but we’re delighted that we’ve been entrusted with a few of the choice 3d visuals of the 2040 proposals, and we might bring you a few of them over the next few days. Thanks WCC! The first one is a teaser for what may be – entitled Triangular Spaces, we can see that it is actually – well, you look, and tell me:

I know it is only a small move at this stage, but it is a significant one: its a Council promoted proposal to demolish the hideous piece of outdated, badly built, falling apart piece of crap that is the sad remnants of the Oaks on Cuba St. That’s the building that once was a cutting edge piece of infill architecture (by Warren and Mahoney?) that once contained a double height atrium, had aerial walkways connecting it to the James Smith department store (really? or did I imagine that), and now just houses a noodle bar, a sex shop, one of the worst clubs in Wellington, a great book shop, a sexy clothes shop, a Body shop, and a handful of other places. What it does do though is completely block off the most popular/funky street in Wellington from one of the most uncool, outdated and under-used spaces in Wellington – Te Aro Park.

We’re keen on that as a proposal – its one of many we’re in support of – and in searching back through our archives, we note that in November 2008 we said the following:
“It would be nice if Dixon St was converted into pedestrian only in return for losing Manners Mall, and in a way, it would be a better swap for the city. Imagine if Te Aro Park only had a road on one side of it, instead of the ridiculous wind-blown wedge that it is now. Take away Dixon St at that point and have trattoria opening out onto the sunny pavement, on the edge of a small urban park! The Dixon St Deli, Wishbone, Subway, Hope Bros, Bambalina, Habebe, 4 Kings, Curry Club, etc etc are there waiting â€“ even the Santa Fe stripclub could get a leg up in life, instead of just a leg over.”

I thought that we at the Fish had proposed that the Oaks be done away with, but it was actually one of long-time commenter David P’s comments that first noted:
“I love the idea of pedestrianising/landscaping Dixon Street. Iâ€™m rather fond of Eva and Egmont Streets which strike me as very Melbourne-like and could be incorporated in to a scheme. You could also extend a park around the corner in to Taranaki Street and clean up the tatty area where the bungy gadget is. If you bulldozed the Oaks, then you could locate a couple of single story cafes in the park area with alfresco seating for fine days.”

So, well done Eye of the Fish readers, and well done DavidP – perhaps we do have some use as a forum after all. Any way – that’s enough from me for today – over to you to discuss if you wish. More coming soon.