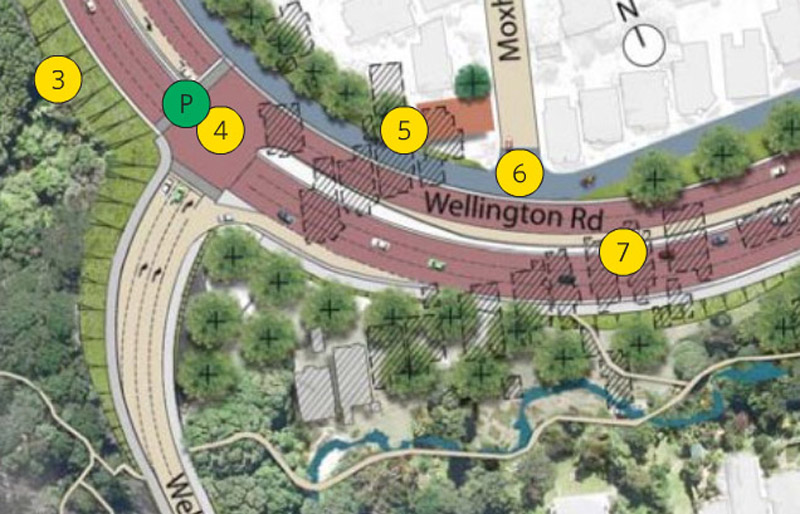 Other side of the Mountain

Following on from the previous post about the goings on around the Basin, we’re pleased to bring to you some of the plans for the other side of Mt Vic – the flip side of the coin, if you will. The comments about the Basin “improvements” have been mainly negative so far, although in a surprise move, inner city resident Mechaniker came out saying he liked an overpass. Actually, to give NZTA their credit, it is a very tricky junction. There IS no simple answer. Well, actually, there is a simple answer – which is to leave it alone – but if you want to do something else there, then it gets difficult. It could be that for the last two years the boffins at NZTA have been scratching their heads, stirring up little more than dandruff, but I suspect they’ve been having an honest attempt at solving this issue.

We’ve found that there is a massive amount of their back-o-the-envelope head-scratchings available online here (post July2) including costings, and tiny diagrams – we’ll delve into that more, later on in the month, but for now: let’s see what the plans are for Haitaitai.

On the last image of the previous post we had a quick glimpse at the corner of the tunnel exit. Today we pan the old virtual camera down the road a bit to discover the road has grown to a rather large width – is that for real – up to a mammoth six lanes wide?

I’m not quite sure why it really needs to be that wide – currently it is one lane wide each way, and the traffic always moves smoothly along (its choked at either end of course at times), so there is an argument for two lanes each way – but why three? Clearly the new lane can only be looked at as a merge in lane to or from the remnants of the Town Belt, or the Haitaitai road. It’s at an intersection controlled by traffic lights as well – which means, ironically, that traffic is likely to be:
A) safer, with no nasty intersection by the tunnel exit, but also:
B) slower, and
C) more stuck at the lights in Haitaitai

I’m not sure that is really the intention, is it?

There’s a certain shock value in the large swathes of grassed area of the Town Belt being proposed to be stripped away here and built over – the old (existing) road seems to remain mainly as a cycleway and generous footpath. The existing trees that line the Town Belt? Choppped down / chopped up. The Pohutukawa? Gone. That nice old Macrocarpa by the Badminton club? Firewood. The Badminton Courts, you may have noticed, are not just demolished, but have the roads going right through the middle of them – that’s how far the road has moved and widened. You may have an opinion on whether that is a good thing or not…. if so, please tell NZTA your comments. Mechaniker – you still following this? Still happy with the scheme?

Moving on: down in the corner of Wellington Road and Ruahine Street, the world’s most frustrating, tightly turning, wrongly cambered corner intersection has had a change of heart and become a high speed / smooth curved slow bend, and also blossomed to a hefty five lanes wide. But in the middle of this high speed intersection, is another set of traffic lights. Oh dear. Does that mean that it is now beset by the same issues as noted previously? See A, B, and C above.

I mean, yes, it is a problem corner to be sure, and it’s a danger now (there’s always broken glass from crunched headlights on the road), but – is there an alternative? NZTA are not offering us any “options” on this one – but I’m sure there are some. There is the – why do we have an intersection here anyway? option. There is the option of a roundabout, even if small. There is – hush my mouth – even the chance of an overpass. Underpass. I’m just thinking though – five lanes? And demolishing so many houses down the street? Is that really necessary? Is there actually a better way?

And finally here is the bit from down on the old shore line, where the deer and the antelope play. Well, not quite: where the cricketers and schoolboys play. Probably even schoolgirls too. There’s already a four-five lane highway along here: it seems to have got a little bit wider, mainly at the western end. It is a problem corner for traffic at present – have the proposed changes made a difference? Do they do as much for pedestrian movements as for vehicles? Your comments please!

Oh – and just for you Petrol Heads out there, name this car please. First one to reply with the correct answer…. gets a chocolate fish? Gets to tell me where I can buy one of these cars.
No, that’s not me at the wheel – I have fins you know, just like this car!
Yes, I know what it is, just don’t know where they hang out!).