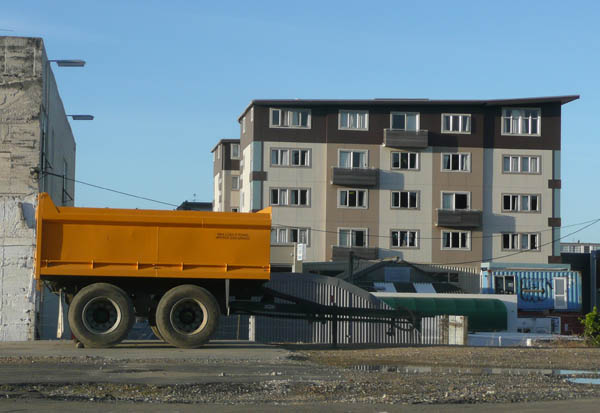 Just what is happening with the roads and tunnels in Wellington? Does ANYONE know?

As we referred to in our previous post, there’s a whole lot of roading issues going on – not just down in Christchurch, but up here in Wellington as well. We’re all aware of the swathe of land that one day is meant to be a Memorial Park, with State Highway 1 winding through it – and despite it meant to have been started years ago, when Helen Clark still ruled the waves, there has been no progress – until now. No official notification. Nothing, apparently, is going on.

Yet, over the past few weeks/months, large concrete barriers have been stored there for use in the Terrace Tunnel refit, large earth-moving equipment from Goodmans in Waikanae have moved onto the site, and now a high security fence and a very big shed have been built on the site. Yet still, no comment.

Way back in the birth of time, before the internet (ie some time in the 1960s), the motorway was going to swoop through the Te Aro flat and end up joining into the Mt Victoria tunnel. People talk. Route not agreed. Money runs out. Nothing happens.

1990s: the path of the inner city bypass was still being debated; eventual route confirmed about 2001.

2002-5?: Something happens: the Inner City Bypass gets built. The phrase “Bypass My Ass” becomes rather popular. The actual bypass, becomes rather less so.

2005: Ministry of Culture buys land for a Memorial Park to be constructed next to the National War Memorial in Buckle St.

2006: Businesses along the Buckle St road slowly closed down. They’re really not happening…

2007: Architectural Centre runs competition for proposals for a memorial park in Buckle St.

2007: A design competition was run by the Ministry of Culture for the Memorial Park. No winner was ever announced, but somehow word got out that Athfield / Wraight had won the project. In the (paraphrased) words of Chris Knox / Del Amitri / and the Clean: Nothing Ever Happens.

2007: (April) – Over $10million in funding announced for possible park. Possibility of underground routing of the road is discounted.

2007: Bureaucrats discovered small children at Mt Cook school next to the Park, and the possibility was raised that these munchkins might be accidentally poisoned to death by noxious car fumes. Nothing continues to happen. Buildings continue to be demolished along the route, including the removal of a petrol station directly in front of the Memorial, and the demolition of a large HireQuip shed on a concrete pad next to the Basin Reserve.

2008: Transit changes into NZTA. Other than that, nothing happens.

2008: Design Workshop at NZTA serves up 5 options for possible Basin Reserve traffic resolution, leaked to the press, but never officially made public.

2008: Mayor Kerry P was still keen to link up the Memorial Parkway to the boulevarding of Taranaki St. Still nothing happening.

2009: (August) – Civic Trust holds a weekend of discussion called “Round the Basin“. Good ideas aired, but no one listens. Nothing happens.

2009: The Park went into limbo, the Labour Government went out of business, and the Nats got in. Well, that’s actually quite a lot happening!

2009: NZTA invited tenders to carry out investigations for Basin Reserve improvements. The contract was awarded to Opus International Consultants. Sorry to say it again, but: nothing happens.

2010: (March) – NZTA Wellington Regional Director Deborah Hume says the need to integrate the Basin Reserve improvements with the Buckle Street upgrade means it would be premature to finalise options for consultation before plans for the memorial park are confirmed, but confirms that: â€œPublic input will be an important factor in the NZTA Boardâ€™s decision-making process on the transport improvements around the Basin, and we need to ensure that those making submissions have as much information as possible.â€ Nothing happens.

2010: (August) – Tunnels Alliance born, being an amalgamation of NZTA, SKM, AECOM, and Leighton. Projects include refurbing existing tunnels, and possibly building new ones.

2010: (October) – Park still in limbo, Kerry P got the Axe and Celia WB got in on an anti-roading campaign. Ministry for Culture publishes Wraight Athfield Interim Park plan. No one notices.

2011: (February) – Something happens: Large steel shed built on existing concrete slab – on site of former large HireQuip shed between Basin Reserve and War Memorial Park. Doesn’t seem to have had to go through any resource consent process: we presume it is only “temporary”. Nothing is said.

2011: (March) – Mayor Wade-Brown allegedly agrees to go ahead with roads in Ngauranga to Airport report. That includes twin tracking tunnels in the Terrace, Mt Victoria, double laning of Ruahine St, and other measures. That seems… odd. Given her previous stance.

Clearly, something has happened…

The MCH website contains proposals for an Interim Park plan, which it is now obvious that the contractors are working to. Excerpt from Wraight Associates plan included here, along with some pics from their submission. Apologies that I had not picked this up earlier:

The intention of the interim park design is to start the implementation of the New Zealand Memorial Park in a manner that commences repair to the existing site, while introducing and celebrating some of the ideas and components of the future park. At the same time it will enable the space to be used as the beginning of an enlarged memorial space. The proposal is to build some areas and elements that can be retained in the long term, and implement others that are clearly transitional in nature but
that are nonetheless contributing to the narratives and functions of the parks interim use.

The central portion of the park is proposed to be established in its final ground form outcome, setting in place the major central ceremonial space of the park, comprising two lawns flanking a central limechip paved plaza opposite the existing National War Memorial space.

The western part of the interim park is proposed to be developed by locating clusters of trees in planters set out in the existing areas of gravel that denote the footprints of previous buildings. These areas would be further defined by minor ground works- effectively reinforcing the existing terraces on this side of the park. In this area it is proposed to undertake no excavation
for the interim park, but instead build up bunding to contain areas where temporary tree nurseries can be laid out. These trees will be used in the final park construction with the benefit in having them hardened off to site conditions.

The existing asphalt will remain largely as it is forming an undulating hard surface between the tree clusters- that will become the canvas for surface paint work- marking the layers of built history of the site. This will allow archaeological investigations to be carried out over the term that the interim park is in place thus preparing the site for final construction. The area of archaeological importance is confined to the western end from the proposed interim west lawn edge to Taranaki Street.

The proposed interim design can then reveal the archaeological investigation process to the public as the work is carried out. This is achieved through the initial mapping of the historic built elements in paint across the existing asphalt and grouping the tree groves on the gravel surfaces of previous buildings. The tree groves can be moved about to frame areas under investigation over the period of the interim design. The interim design is intended to be in place for a period of one to three years. The central area can be used for ceremonial purposes throughout that time.