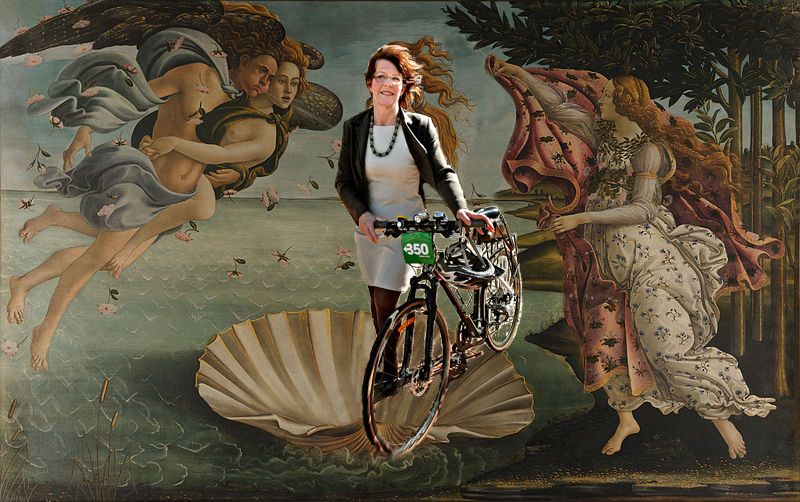 Itâ€™s not unusual for mayoral cycling fanatic Celia Wade-Brown to advocate for cycle lanes. While her recent support for road building has caused some among us to query her how green her credentials are – one thing for certain is that if thereâ€™s a road to be built thereâ€™ll be cycle lanes attached to it.

Itâ€™s this dogged attachment to said cycle lanes that the Fish understands is the only reason the public is yet to hear about the confirmation to build the CBD to Eastbourne tunnel. Yep our council insiders report it has the go ahead – well almost – the Mayoral cycle lanes (which are a wee bit more expensive when theyâ€™re added underground and underwater) have pushed the budget over the tolerated envelope of expenditure. All the costings (the ones that have council approval) were sans bicycles, and now the mayor is supportive of Eastbourne seceding from Lower Hutt, the potential of the tunnel to turn Eastbourne into both part of Wellington City and a cyclistsâ€™ paradise (cycling time to the Pencarrow lighthouse will be almost halved via a tunnel) itâ€™s the cycle lanes which have become the sticking point.

Well to be truthful itâ€™s a little more complex than that – itâ€™s the light rail connection she really wants. Those poor guys at the traffic department thought they just had to design a simple two-lane tunnel (of the Mt Vic and Kelburn garden variety – I mean theyâ€™ve already got the plans for those). People who have a cruel streak in them have been suggesting it was recently departed Clay Johnson who put her up to it. It seems itâ€™s a old council parlour game – â€œWho can convince the Mayor to add a cycle lane to this _____â€? So far cycle lanes have mysteriously appeared on farewell cakes, council Christmas cards, policy documents for earthquake strengthening, and the plans for the world premiere of the Hobbit – oops Sir Peter doesnâ€™t know about that yet.

So you can see their dilemma – itâ€™s just not so simple. Once you are committed to a cause itâ€™s just so so hard to let go.