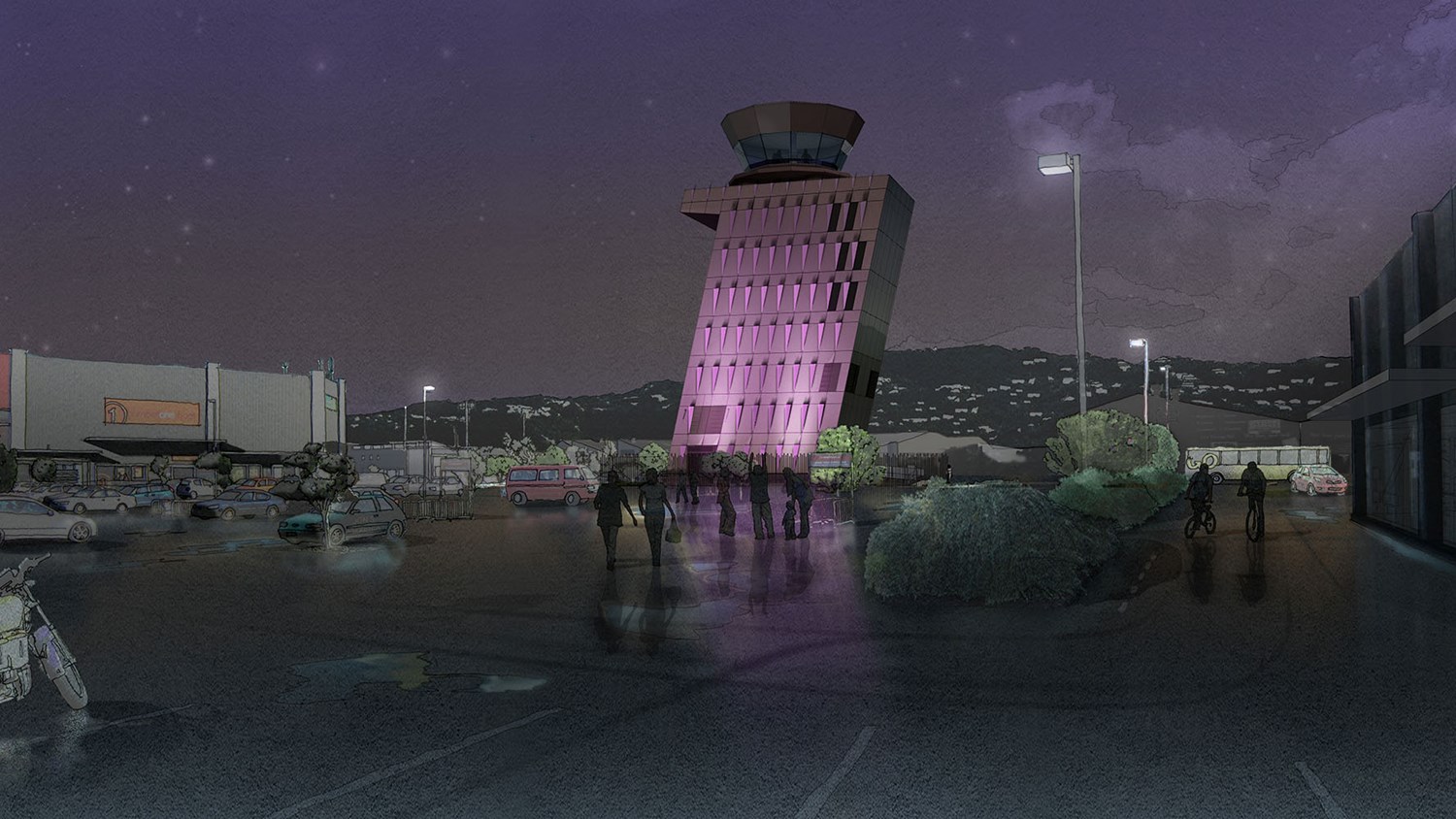 The south wind blows strong at the Wellington Airport: nowhere more so than in the architect’s eye. This scheme was sprung on us a year or so ago, with dramatic renderings of a radically leaning building as the new airport control tower. A certain amount of artistic license is expected in the architect’s image supplied, but the sight that is now reaching high into the sky from the carpark out the front of the Warehouse in Rongotai is proving seriously quirky, and that’s even before the cladding has gone on.

The building is steel framed, and sits on base isolators on a massive concrete raft foundation. The leaning tower of Pisa, the silliest, most famously leaning tower of them all, skimped on their foundations and have been regretting it ever since. Mind you, I’m not sure if they had even invented concrete back then, in 1173. Pisa sits on a very flat, waterlogged plain, slowly draining into the river Arno, and to site the three massive marble buildings on the site was perhaps always going to be asking for trouble. After all, the name “Pisa” is allegedly Latin for “swampy marsh”, so: go figure. The Duomo and the Baptistry stayed upright, the Campanile tower unfortunately did not. Problems started early on, and continued. When they started to notice a problem, the correct response probably would have been to stop, tear it down, rebuild the foundations, and proceed on again. But they chose not to, and they soldiered on, making little adjustments at every floor, so that now, even if you tried, the building could never be truly vertical. Getting to a maximum of about 5.5 degrees out of kilter, and almost collapsing in a pile of very expensive tourist-laden rubble, the tower has now been dragged back a bit more upright to a far more stable tilt – just under 4 degrees (note: Wikipedia says it reached max 5.5 degrees, Stuff says it reached a max 10 degrees. Mmmm, who to trust?). Regardless, Pisa is now known for one thing only: the lean that just won’t quit.

On the new Control Tower in Wellington, engineers Holmes Consulting and architects Paris Magdalinos and Studio Pacific have certainly not skimped on the foundations, but their building will certainly be leaning anyway – it has an angle of 12.5 degrees built into the design, with base isolation built into the slab. Contractors are Hawkins Construction. Being so close to the sea, and in a tsunami zone, they had to do a fair bit of work in the ground before anything headed skywards, and no doubt if there is ever a tsunami, this will probably be the only thing still standing. There is a thick web of steel columns, beams and bracing that provides a sturdy lace-like effect as it rises from the ground. Stairs have recently been craned into place, the stair opening on each floor moving sideways a little in order to keep the stairs running simply vertical. The lift, if there is one, will no doubt also be strictly straight up and down. The control tower will be 32m high – the Pisa tower is 55-56m tall – so even if it is only half its height, the Rongotai tower will physically hang out a lot more than the Pisa tower was ever allowed to. One question I have though, is why on earth did the airport buildings ever get built on the other side of the runway? Wouldn’t life be so much easier if the terminal was over this side as well? Certainly public transport would be easier…

I resisted putting the title of Leaning Tower of Rongotai on this blog post, but it is an inevitable title for the building. There are other leaning towers of course, including those intentional as well as accidentally occurring. Itâ€™s not really possible to make much comment on the building until it is totally up and finished, except to note that the structural system does not appear to have been expressed in the planned external facade. In some of the renders online, the cladding seems regularly trapezoidal, whereas in other renders it appears to have been struck by Spiderman’s web, with a thin layer of facade laid out like netting. While the steel structure behind is for the most part rigorously orthogonal, fixing the structure squarely to the ground, the cladding looks as though it will have a resolutely slanted appearance, in keeping with the windswept, just-about-blown-off-my-feet game that the building makes overall. Regardless, the awkward junction to me was always going to be at the roof: first the odd little serif at the top of the tower, like a stray piece of Times New Roman in an otherwise Helvetica world, and then the transition from rectangular tower base to the 14-sided? polygonal control room up top. Wellington’s architects will be watching with eagle eyes to see how well that is resolved in the final building.

At this stage in the construction however, the most interesting thing (to me, anyway), is the giant orange pipe descending vertically through the building. Large bright orange pipes are not normally an essential part of a building, so I am guessing that perhaps this contains a special function – comms relays perhaps? radar? fast delivery lunchbox supply shute? air-traffic controllers swift exit route? or is this just the column that tells the crew if the building is actually leaning over or not? do they dangle a plumb line down the orange pipe and see if the building is still behaving like a more traditional vertical thing, or if the lean has got a lean on? you tell me…
Post-script: Capital Gate tower in Abu Dhabi. Thanks Mr Henry Filth!

I’m going to leave you now with a foretaste of things to come in the forecourt of The Warehouse in Rongotai, where one day we may see tourists composing themselves into hilarious, obligatory, side-splitting poses such as these. Banal it may be, but it is a sure sign that you have connected with the public if they start interacting with it to this degree. Enjoy yourselves people, no one has ever done that before….