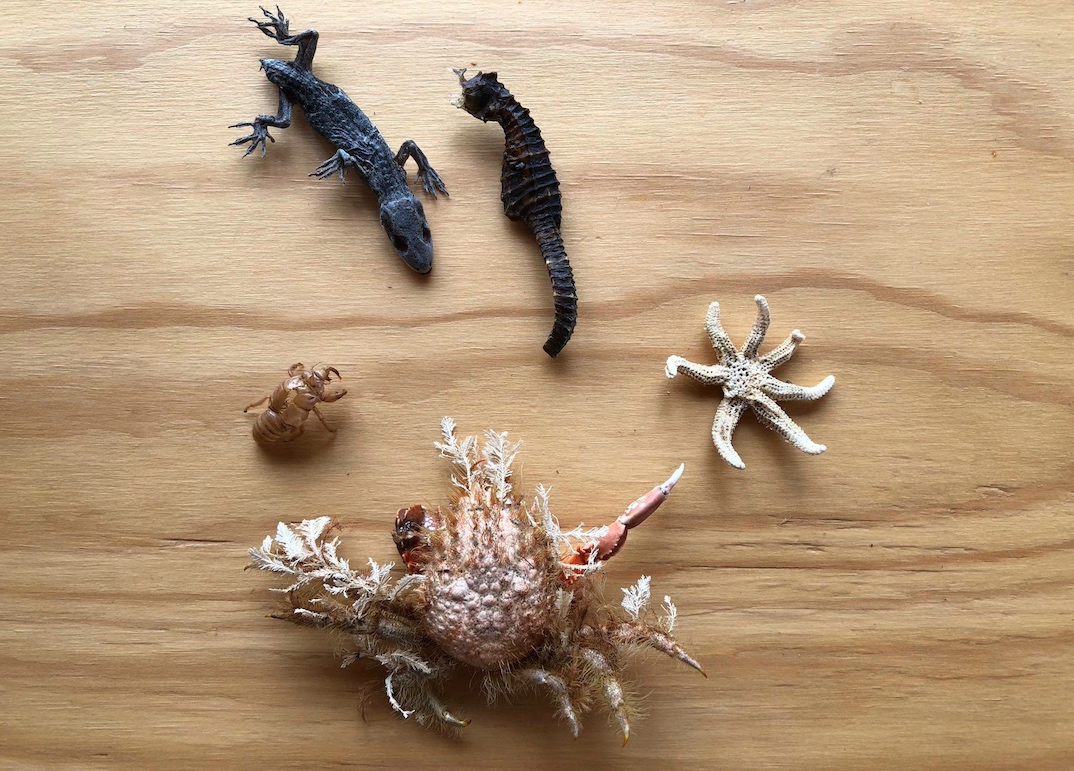 Yes indeed – it’s hot, and dry. The sea beckons. As much as is allowed by law and social decorum, I’ve been at the beach with as little on as possible, and more often than not in the water rather than just sitting on the edge. At last I am understanding why Maximus was always banging on about being a fish – it is truly lovely to be able to float around, without a care in the world, immersed in considerable amounts of clean clear water.

Not so much luck for this assortment of flotsam and desiccated offerings – the crab, disguised by underwater subterfuge, is a thing of beauty – I can honestly not tell where the crab ends and the seaweed begins. The cicada – yes, a standard crispy packet of summer goodness, zzzz-zzzzz-zzzzz on the nearest power pole. More impressive than that is the little starfish, sadly it was marooned on a pebble and dried rock solid in the harsh sun.

The last two treasures: first, the dried seahorse – I’ve never seen a live one out in the wild, but this is the first dead one I’ve seen as well. Fascinating and fragile. Lost its nose, poor thing, but still an absolute treasure. And then, just today – a mummified lizard. Skink? Gecko? Hard to tell. But beautiful, just the same.

Not really sure what to do with these critters, so I thought I’d share them with you.

There is also a dead, dried, desiccated rat, in full-on mummy condition, but he is not quite so photogenic. Mind you, in death, I won’t be so pretty either. But I’ll spare you the rat, for now.

I am hugely, uncomfortably aware, that as wonderful as this patch of good weather is, or has been, it is a sign of some really screwed up things happening on our planet. No, not talking about Trump, or Isis, although they are part of the problem too, but of course: climate change, caused by anthropogenic-induced global warming. It just seems so obvious to me that there are far too many people on the planet, and that many people need to die, for the good of the rest of the animals and plants that live here. There is over 7 billion now, and the ‘experts’ tell us that we might round off at about 10 or may be even 11 billion humans on planet earth, if we’re lucky.

I don’t know about that – sounds awful to me. So much futile wasting of energy, so much destruction of food, so many corrupt companies and politicians. And meanwhile, we just sit here, doing nothing to save ourselves, thinking that turning out one light will make a difference – what really would make a difference is the wholesale slaughter of about 5 billion people, but that is hardly likely to happen. Unless, of course, Lovelock’s Gaia theory comes to fruition, and Mother Nature zaps us all with the Asian bird flu again.

At present, we seem to be for more like the proverbial Frog in a saucepan of warm water. Hmmm, it is getting warm in here, I like it. Hmmm, it is getting even warmer in here, I must be so lucky to have a nice warm place to sit. Time to jump out of the pan? Or just stay for a little while longer? Hmmmmmm, now I’m dying of dehydration.