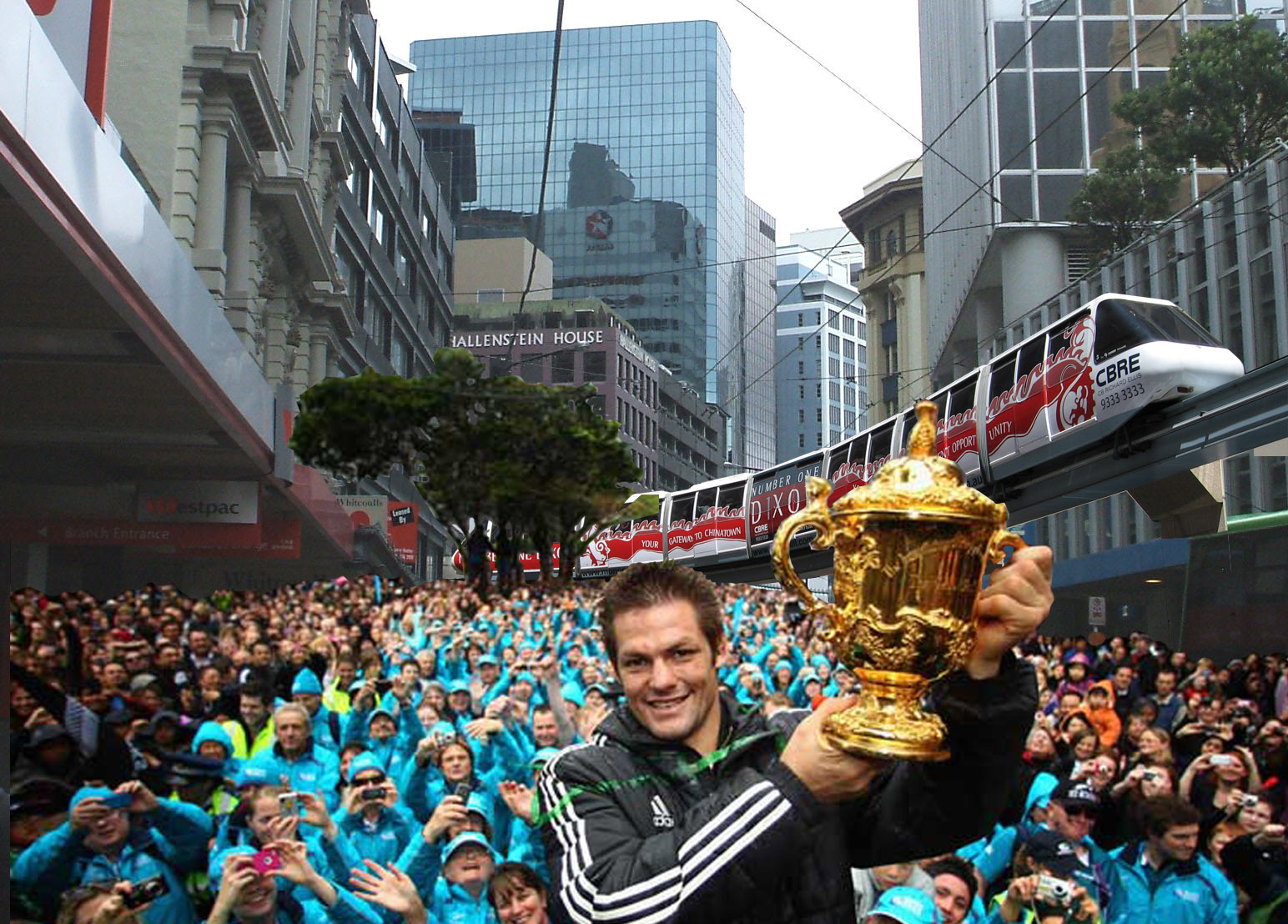 In a surprising piece of breaking news today, we have just heard that the results of the Wellington Public Transport Spine study have been announced, and the end result will no doubt surprise some people. In line with Wellington City Council’s new found love for Flyovers, as approved by Councilor Andy Foster at a recent Council meeting of the Strategy and Policy sub-committee, a flyover is now being seriously proposed to get over Wellington’s much overloaded passenger spine as well. Seriously? Yes, indeed, if this morning’s announcement is to be believed.

The two year long study of the central Public Transport Spine has released two interim reports, the first presenting a range of some eight “possible” outcomes, many of which were presumed to be put in there only to bolster numbers, and should never have been taken seriously. The second report, released last year, had reduced the options down to just three options (of bus-lane, tram-line, or stay-as-is) and this last, final report has been long promised to be released in April of this year. Here we are, on April 1, and the results this morning are truly startling. The preferred option is, it seems, now to run all public transport at the overhead position, leaving the ground floor, at this stage, completely free for pedestrians. It seems that iPod-wearing, coffee-drinking, web-designers are at least partly to blame for this change, as they are the stereotypes that have been most responsible for walking blindly into the paths of buses. Worry no more, you groovy tiny bearded hipsters.

The proposal has the advantage of getting over the clash between pedestrians and buses, that currently occurs along the entire length of the Golden Mile, and has been going on for many, many years; by raising the rapid transit a single story into the air, a number of advantages occur. Firstly, the reduction in pedestrian deaths from stumbling into the paths of the oncoming buses / trams. Secondly, it seems that passengers will be able to simply walk up steps to upper level stations, or catch a lift up one floor where provided. Thirdly however, there are distinct synergies that will allow retail businesses to now effectively have two ground floors, and so get increased numbers of retail customers. Landlords, of course, will get twice the (highly desirable) ground floor rent. Lastly, and in the long term, most importantly, in the case of widely predicted sea-level rise expected over the next 100 years, lower floors can be steadily abandoned as the sea level rises reclaim the Lambton Quay former “beach front”.

Only a week or so ago, the decision was made by the Wellington City Council, that they would in effect support the proposed NZTA flyover at the Basin Reserve. Regular readers of the Wellington Scoop web-pages may recall the howls of outrage that greeted this decision. Rumours of political intrigue abounded, with Scoop editor Lindsay Shelton noting that Councilor Andy Foster appeared to have been nobbled and neutered into taking a more hands off, neither confirm nor deny stance on the NZTA proposal, that left the way clear for a flyover to proceed. Even National party “wet” Chris Finlayson went for the jugular, accusing the Council of delaying tactics, in a heroic attempt to shift the focus for ineptness away from himself. Continued criticism of the NZTA design by all and sundry, including a slating review by Auckland architect Richard Reid, must have left NZTA wondering how they can have got it all so hideously wrong. Selwyn Blackmore, heading the project at NZTA, was rumoured to have been found banging his head on his desk, moaning the words “How could I have got it so wrong” over and over again. Jenny Chetwynd, this year’s spokesperson for the Flyover project, was in tears as well, having been caught out in an embarrassing conflict of interest scandal involving key personnel at the Council. But it appears now that this move by Foster, heralded as “the saviour of Wellington” by the completely un-partisan Wellingtonian free newspaper in a recent unsigned editorial, was in fact a spearhead movement to introduce the flyover to Wellingtonians as a good thing, as well as a foregone conclusion to the Basin.

The new flyovers, continuing all the way down Lambton Quay, Willis Street, Manners Mall, and Courtenay Place, will displace all of the existing bus traffic onto the upper level, and allow the much-riven Wellington City Council to continue to argue for many more years whether the much-vaunted Modern Tram system proposed for Wellington, is in fact financially feasible or not. If it is eventually proved feasible, then siting it on a ready-made elevated pathway will be a simple matter of laying tracks – after all, the stations will already be in place.

This is not a new move for built-up cities like Wellington – Sydney has had, for many years, a highly successful upper-floor monorail system whizzing almost unseen through their upper streets, and is only now reluctantly on-selling their ground-breaking system onto the Tasmanians. The Wellington scheme, already dubbed the Wellington Corridor system by some, is expected to take mere tens of years to build. NZTA engineers, by that stage adept at constructing flyovers, will be able to construct the new central city flyovers using their same magic “no-visible-column-support” system that has been so widely successful at the Basin Reserve. More than that, NZTA’s head of something, Rod James, has confirmed that upper-level flyovers are silent, and make no noise, so that there should be no need for any complaints by anyone. In a statement to the press, Mr James has said:

“Hi, Rod James from the NZTA here. The section of the Wellington Corridor does not include 3m high noise walls. Itâ€™s true that some roading projects need to be mitigated like this, but this generally applies to motorways adjacent to residential suburbs, with far higher traffic volumes travelling at high speeds. The Bridge is more like an elevated two lane street, with a 50km/h speed limit and two lanes travelling through the city. I can appreciate that people are concerned about noise, but clearly we are talking about something very different here to a 100km/h multi-lane motorway.”

It is understood that Mr James has volunteered to have the first flyover be built directly outside his bedroom, to emphasize how comforting the lack of noise from the flyover will be. Further announcements are expected on the project as it becomes live this afternoon.