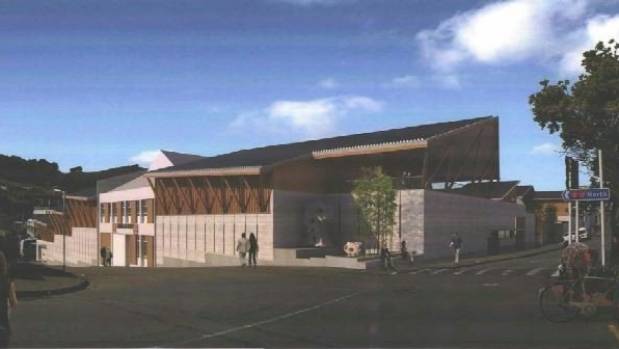 The prospect of a new Embassy for the People’s Republic of China has been a long time coming – and now, at last, it is here. Well, nearly. The site has been empty for years – so long, in fact, that I really can’t remember what was there before, except for the Swimming Pool of the Girls and Boys Institute ? Off in the far south west corner – quite well used – now no more. Once the site was going to be a supermarket, but that was always a fairly stupid proposal – possibly never really serious – as the traffic jams around the basin were just going to get more and more severe if you added another couple of thousand of angsty shoppers in hatchbacks buying vegetables and family meatpacks. Plus, the architecture of the supermarket proposal was fairly awful as well. Were there apartments on the site as well? I forget. We’ve probably written about it on more than one occasion – but it is so long ago that it is literally, lost in the depths of time.

China is like that too, allegedly, taking time slowly. Mao Tze Tung, when asked what he thought of the French Revolution (1795ish), apparently replied “Too soon to tell….” Might have been the same gentlemen, when asked what he thought about Western civilisation, allegedly replied “That would be a good idea.” Harrumph. Mao always had the best lines. Now, of course, Mao is probably not officially mentioned any more – just the new boy. The tall one. Good looking bloke. Xi Jinping. Enigmatic. All powerful. President for Life. Politics, huh? Quickly – let’s get back to the building. How to describe it? Hold on – let me find a photo.

There, that’s it. So, what do you think?

So, presumably for the last several years, when China bought the site in 2014 for around $16 million, they’ve knocked down all the buildings (except Guardian House, curiously – maybe they don’t own that?) including the Boys and Girls Swimming Pool (how to really piss off all the neighbours from day one – good work China), put up a large fence, mowed the lawn once a year and largely ignored the locals. Which is largely what they plan to do with the new building, so it would seem.

There must be an architect involved, but the Press release does not mention one. The illustrations, which are all quite blurry, are noted by the Dom-Post as being merely “supplied” which is that bland stupid phrase for: we know who the architect is, but we’re not going to tell you because they haven’t paid us for an advertisement. That’s so irritating. Eye of the Fish will happily post some clearer pictures if the architect wants to send us some. Usual address: contact @ eyeofthefish.org And we’ll happily post the architect’s name as well if you want. We have the pure advantage of not having any commercial interests. Comments welcome below, of course.

I am in two minds. On the one hand, from certain angles, including the most likely external viewpoint, it is awful. Looks like a bunker. Impregnable prison walls. No active edge visible – instead, massive security and not much else except roofs. Dull, boring (at least at ground level near the Basin), and walls ripe for graffiti.

On the other hand, not much traffic in or out. So, that’s nice, and a good change from a busy supermarket. And small scale village atmosphere with many interesting roofs. There is, I guess (having not been to China), some reference back to both Chinese historic residential architecture (mostly now demolished in Beijing etc) as well as to, at some level, the heritage suburban architecture of the surrounding Mt Cook / Newtown. We’ve not seen the plans and are unlikely to be able to do so, but I’m hoping that there are some courtyard housing style buildings hidden in the depths of the Embassy. As many people have remarked, it is a great pity it’s not the site for the Chinese Garden that no-one wants on the waterfront.

Yes, yes yes, we understand that as a subject of distinctly lukewarm reciprocal feelings to America, China is obviously fairly security conscious these days. The current Chinese embassy in Glenmmore St over by the Rose Gardens, is literally bristling with super-large spy aerials, for transmitting those vital reports back home, about the laxness of us wicked kiwis. No sign of those aerials in this project, but have no doubt that these buildings will sprout some more aerials as well. But New Zealand is not America, Adern is not Trump, and we like China very much over here. We like to sell them milk formula, and they like to send us their millions of middle-class tourists. Occasionally, they’ll buy up large sections of the country, or most of the spare housing in Auckland, and then we generally don’t like them so much. But we are not the sort of nation that is likely to be attacking them in any way other than verbally, occasionally, and rather lackadaisically. So why the big walls?

I get that the Embassy is recognised as a piece of another sovereign country, and therefore must be impregnable – but I’ve been to an Embassy or two in my time, and they’re rarely that oppressively impregnable. The US Embassy in Wellington is of course a security nightmare – don’t try and take a photo anywhere on public land nearby, even if you think you have a perfect right to, as the Yanks will come out with guns waving and make your life miserable. The Italian and British Embassies in Wellington on the other hand, are most genial. Our Embassies overseas are also fairly laid back – the American one for Kiwis in Washington is a superb Miles Warren design, and the Ambassador cooked me up a sausage on the barby. I kid you not. He’s like that. Thanks Mike.

One last thing: why here? Why on earth do the Chinese want to leave the sanctity of Thorndon and the Rose Garden, to come and live and work in Newtown at the edge of the world’s largest and most traffic-bound roundabout? Is it just because it is already on the route to the airport in case they need to fly to Auckland to buy another villa in Remuera? Or is it a strategic siting, being just across the road from the Governor General? Status is important to the Chinese as we know, so they may be thinking that is a good reason. Or is it just that it will be virtually next door to the McDonald’s drive-through, so they can send out for imperialist running-dogs in a bun? With extra cheese? How would you like your Embassy – would you like fries with that?

Post-script: that was a lame ending to the review, completed late at night while I was falling asleep. Motto to self: go to sleep, don’t press Publish, until you’re sure you want to say that. Let’s just say… Covfefe….

I thought that it might be interesting to actually finish with a couple of pics, of what traditional Chinese architecture was like (well, the Hutong housing in Beijing, at least – not sure if all China was like that). There is a strong semblance of breaking down large monolithic architecture programs into smaller, more approachable, friendlier zones such as those shown in the following couple of pictures. Similarities with the design? Your thoughts?