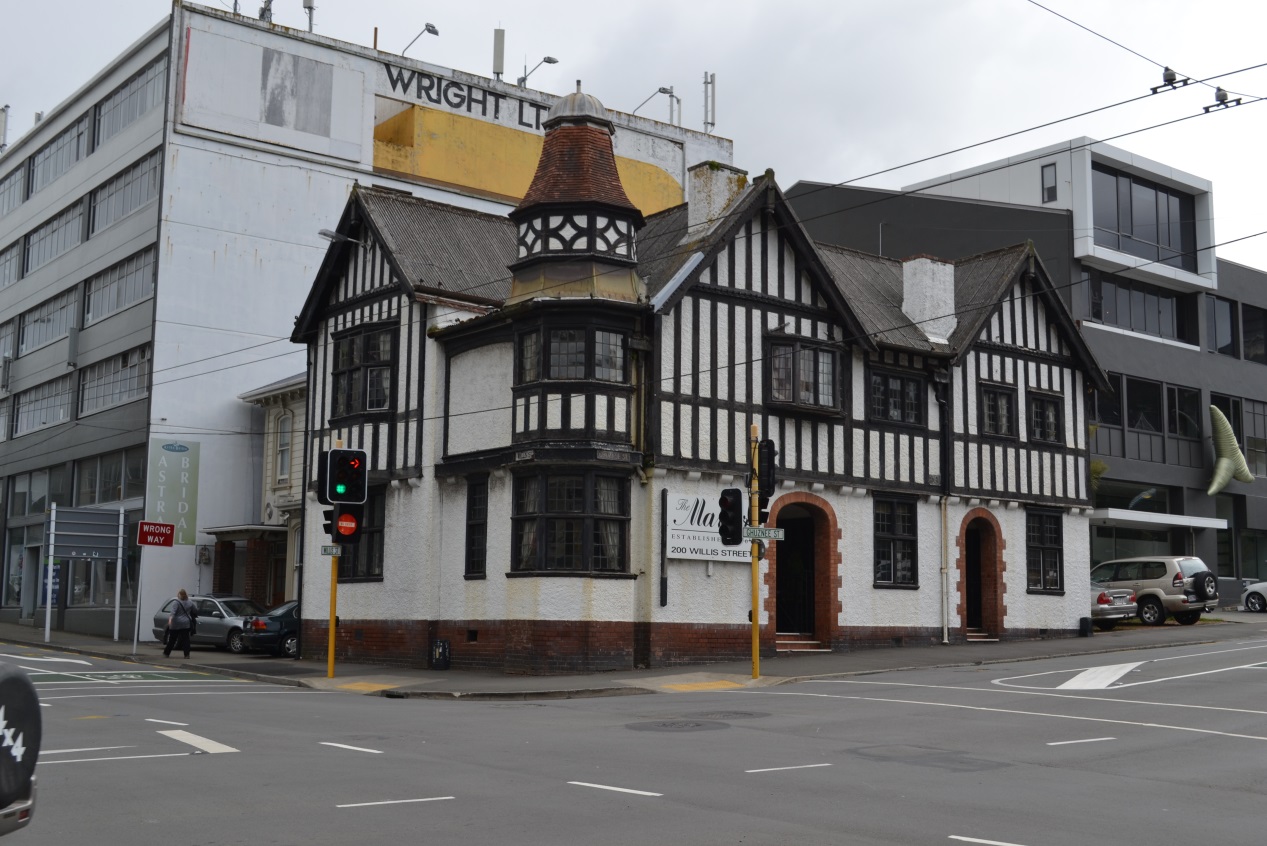 News from the WCC this week, was that they have allocated $500,000 in funding for works towards seismic strengthening of heritage buildings, via the Built Heritage Incentive Fund.
“The BHIF supports owners with the conservation and seismic strengthening of heritage buildings. This project combines with a number of others to support our resilience and environmental objectives, which we are currently encouraging public feedback on. Based on submissions to date, resilience and environment is already a priority Wellingtonians want tackled first.”

The Eye of the Fish is hugely supportive of the steps WCC is taking to help this city retain as much of its historic heritage as it can. Some other cities can’t afford to do this – and are sitting ducks / basket cases, with no chance of redemption, just potential mass demolition ahead. Some small District Councils have little clue on even how to start this process – and while it may make the country theoretically safer, in the unseen event of an earthquake, the chances of a building falling on a wandering local in say, Pongoroa, are small, given the tiny population. But still, strengthen they must.

There is an alternative to the WCC BHIF fund in other places – the Government has also set up a strengthening fund (for buildings, as long as they actually are heritage registered), called Heritage EQUIP. Amazingly, this is part of the Ministry for Culture and Heritage – a hugely welcome addition. I’m not sure how long it has been going for – perhaps only a year or two – but it too is doing wonderful work. The next application round for Heritage EQUIP is closing on 27 July 2018 – and they have done some hefty funding so far, such as $60,000 for the Albemarle Hotel in Wellington, and $230,637 for the Bank of New Zealand in Whanganui. And many more. If you’re keen to know more, check out their website and talk to the Earthquake Upgrade Incentive Programme.

Maybe I’ll do more on the EQUIP later – for now, here is a bit of info ripped straight from the WCC Heritage system, to help explain to you dear readers, a little bit about the heritage buildings gaining funding this week. All the words are from WCC, as are the pictures, but I’ve put a link through on each one to go to the WCC Heritage Register for that entry, wherever I could find it. Curiously, there are a couple of addresses I could find no info on, and another couple with wrong addresses listed – I’d love it if someone from the WCC could read this and clarify where those unlisted places are, or if I have received wrong info. Anyway, without further ado, here’s the list. Buildings benefitting from the BHIF latest round (May 2018)are:

Plumbers Building is a good representative example of a 1920s Stripped Classical warehouse, designed by well-known Wellington architect William Fielding.
This building retains much of its original street frontage and is an important streetscape element in Wakefield Street
The building is one of several buildings on Wakefield Street that contribute to the character of the Cuba Street Heritage Area. These buildings represent a diverse group of purposes and architectural styles which neatly encapsulates the history of 20th century development in this area.

This building was designed by notable Christchurch based architect Joseph Clarkson Maddison.
The faÃ§ade of this four storey Edwardian commercial building, the tallest on the block, has been much altered from its original form, but the building retains a strong presence in the streetscape and is representative of the architecture and history found in Cuba Street.
The building is part of a group of Edwardian commercial buildings on Cuba Street and makes a positive contribution to the sense of place

Arco House is an Edwardian Stripped Classical commercial building that was adapted in the mid-1950s as a retail unit, and warehouse for a manufacturing jeweller and optician/lens grinder.
The building retains a historic association with builders James Trevor and Co. and also with Arthur Cocks & Co. a wholesale jeweller, optician and importer, for which the building was renamed in the 1950s. The plans to convert the building into premises for Arthur Cocks & Co. survive and give a good insight into the work of a mid-to-late 20th century manufacturing jewellery and optician.
The plain building faÃ§ade above ground floor level has had few intrusive or unsympathetic alterations over the past 100 years and makes a positive contribution to the sense of place and continuity of the Cuba Street Heritage Area.

112 â€“ 122 Riddiford Street is a fine example of a mixed use Edwardian hotel/commercial building. It is notable for its vigorous and assertive design that makes full use of Classical motifs and ornamentation.
This building contributes to the Newtown Central Shopping Centre Heritage Area.
The buildingâ€™s design qualities, prominent location and wedge shaped plan, make it one of the most recognisable and memorable buildings in Newtown.

250 â€“ 262 Riddiford Street is a much-altered terrace of seven shop/dwellings. The buildings are good representative examples of Edwardian timber mixed-use commercial buildings, but their architectural/aesthetic value has been somewhat diminished by the removal of the original shop-fronts.
These buildings have had uneventful histories that are typical of their Newtown neighbours. They are associated with the development of twentieth century Newtown and its commercial development into a central shopping and commercial district.
The terrace is made up of a distinct group of seven individual buildings that were built for Hamilton and Gilmer in 1901.

This 1920s reinforced concrete-framed commercial building has an unusual, lively and eclectic arrangement of classical decorative elements on the facade.
The building has housed a range of tenants, among them dentists, land agents, jewellers and insurance agents.

â€˜Glendaruelâ€™ is an excellent example of an early pit sawn timber cottage. It is one of the oldest examples of a pit sawn timber dwelling in Wellington.
Glendaruel is a house of considerable age and historical significance, although part of its history is somewhat obscure. It was the home, for seven years, of the family of P.F.M. Burrows, one of New Zealandâ€™s most prominent colonial architects in the 19th century. The family with the longest association with the house is the Woods. The house was bought in 1919 by the Rev. Robert Wood and remained in the family until recently.
This house is a good representative of an early put sawn cottage dating to before the turn of the century. It is constructed in materials, and using techniques, that were common to the period.

200 Willis Street is a good example of an Edwardian Tudor-style building designed William Turnbull, a prominent local architect known for his skill in the design of revivalist buildings.
The building with its distinctive black and white colour-scheme, eight sided corner tower and prominent gables, is a prominent local landmark. The building forms part of the background to the superb timber gothic St Peterâ€™s Church and brings a human scale to the busy Willis and Ghuznee Street intersection that is otherwise typified by large, modern commercial buildings.
The building has a strong historic association with Sir Donald McGavin, a well respected surgeon who was knighted for his work in WWI and was used as his surgery and residence. The building also has an association with the New Zealand Red Cross, and with the United Industries Club, an organisation set up to provide facilities to young women who worked in industry as part of the â€œwar effortâ€ in WWII.

St Peterâ€™s Church is one of the great timber buildings of Wellington, the work of the foremost local architect of the time, Thomas Turnbull, and a significant example nationally of the Gothic style executed in timber. It has high aesthetic value for its architectural design, the assurance of its main interior space with plain white walls and rich timber finishes, its stained glass windows, and for its landmark/townscape qualities.
The building, when seen as part of a group of fine 19th C Thomas Turnbull timber Gothic churches in Wellingtonâ€™s CBD, is of national significance.
An Anglican church has occupied this site since 1847, seven years after regular European settlement began, giving St Peterâ€™s an association with the land of over 150 years. The present building has stood since 1879 and has strong historical value for the city, and strong spiritual and commemorative associations for the generations of parishioners who have worshipped in it.

The Shamrock has architectural value as one of the oldest remaining hotel buildings in Wellington – although it no longer fulfils this purpose. It is a now rare example of a two-storey hotel, built on a prominent corner site â€“ a once a common building type in Wellington and New Zealand.
The hotel/ tavern has been associated with the hospitality trade for over a century and for much of its history was a special place for those of Irish descent in Wellington. It was also well patronised by residents of Thorndon and the wider city, including members of Parliament.
Although relocated from its original site in the early 1980s, the building shares similarities of age, typology, materials, use and history as its Thorndon neighbours, and now sits well within the context of historic Thorndon.

The Wellesley Club is the pre-eminent building in the Georgian style in Wellington, a major work of the architect William Gray Young. Its architectural excellence was recognised by the New Zealand Institute of Architects which awarded it a gold medal in 1932.
The building is associated with the Wellesley Club, an establishment that has been important to the social and business life of the capital city for over 100 years.
The building makes a strong positive contribution to the Stout Street Heritage Area, a collection of nearby high quality heritage buildings.

One of Wellingtonâ€™s finest 19th century timber churches, it features a rich timber front facade and a high-quality interior.
The Methodist Wesley Church has been in Wellington for over 130 years.
Wellingtonâ€™s Pacific Island community (Fijian, Samoan and Tongan) have made this their spiritual home for many decades.

This Victorian military building is a legacy of New Zealandâ€™s late 19th century history, when anxiety about sea invasion led to building defence structures.
Despite many alterations, and its 1992 relocation, the building has kept its octagonal lookout tower, decorative timber ornamentation and external timber boards.
In 1894 it was built as a boathouse for the Wellington Naval Artillery Volunteers (WNAV). In 1927 the building became the Wellington Free Ambulance’s first ambulance station until 1931 when The Wellington Rowing Club moved in.

Yes, there is a total of over $500 k but I think you might just agree that the actual amounts given are small – but a smidgen of what might be needed for the full restrengthen – and the buildings are well worth trying to keep. Some have more architectural value than others, that’s true, but that’s much the same as people really, isn’t it? Some are better than others, but all have a right to live?