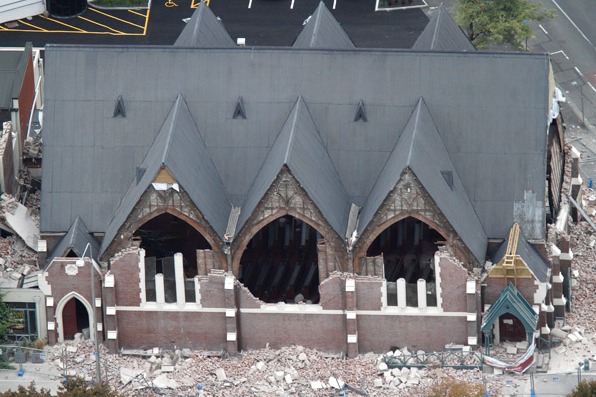 As is most of the country, the Fish bloggers are stunned at the gravity of the situation down south – and we’re from the city that was expecting the next big one to happen to us. We noted back in September that we had escaped narrowly from death and disaster – not so lucky this time. Our wise, wizened and warily experienced commenter, the hard as concrete “60 MPa” wrote then about Wellington’s chances:

“In a decent (7+) shake here in the Well, Petoneâ€™s gone, Upper Cuba is shopfront collapse, Mirimar peninsula will need those boats, SH2 to Hutt is probably out and Ngauranga could be dicey. Ngaio Gorge should hold once the rockfalls are cleared. A decent 4WD and a good boat on the trailer launched on a calm day could be the best way out of town. Te Aro flat will be.

A spare stack of a dozen sheets of plywood in the garage is a good idea, if they were sized to your largest windows thatâ€™d just be fancy. Extra points will be awarded for a cubic metre of sand in the garden somewhere and a collection of flat empty synthetic sacks ready for filling. Generators are smelly but an inverter off the car battery will charge ya cell but after a few days thatâ€™ll be useless. Radio. Nothing wrong with canned food.”

So in the 6 months since then, and almost exactly 80 years after the Napier earthquake (still New Zealand’s most costly natural disaster in terms of human life), is New Zealand any better prepared? The Arch Centre website is noting that Wellington needs “to face the reality of an equally (or, far in excess of) grim destruction.” How is Wellington’s preparedness doing?

Has your organisation been having earthquake preparedness drills? Has your brick chimney been strengthened or removed? Does your apartment building have a steel frame, a concrete frame, or do you live in a building made of brick or stone? Because, when it comes down to it, that’s the simple answer: gravity sucks. Christchurch’s buildings are showing just that – in 2 or 3 seconds, if there is no reinforcement in the stones or bricks, then it has little chance of staying upright. But regardless of that, shouldn’t the more modern structures be staying upright? What happened here?

Post-script update 25/2/2011: One of our commenters has suggested that New Zealand should have just one earthquake zone, instead of the 3 we have at present. We include here the NZ Earthquake zone mapping.

It is certainly shocking to see how it carefully puts Christchurch into the Low / Medium Risk category, when that certainly doesn’t seem to equate with the recent spate of quakes in the South Island.