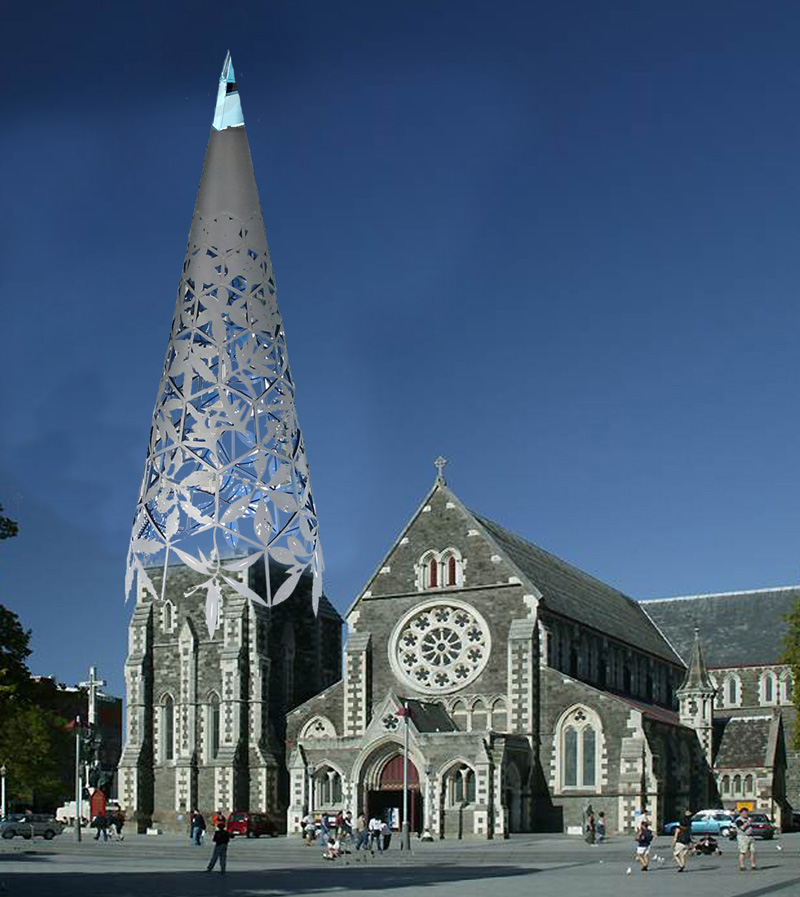 We’re heartened to hear that the Christchurch Mayor, Bob Parker, has announced that he is sure that Christchurch Cathedral will rise again, and be rebuilt stone by stone. So much of the other heritage around is being lost – and which after the September earthquake, the Christchurch City Council had not been able or willing to save. We can only presume that Mayor Bob means the Anglican cathedral in the Square, rather than the Catholic cathedral which has taken a far heavier battering. While I do hope that the Cathedral will be rebuilt, I hope that it will not be an exact replica. It needs to incorporate the newest structural technology, to keep it safe. I’d like to suggest, not entirely tongue in cheek, that an end result could look something like this:

May as well propose it here – you just know that Neil Dawson’s “Chalice” sculpture is going to be suggested to be incorporated at some stage – and, well, you saw it here first. It is a symbol of hope – and that’s what the country needs most of all right now.

Mayor Bob Parker says Christchurch’s iconic cathedral, which was badly damaged in the earthquake, was a stunning and symbolic building, but will be rebuilt. There will be a new and stronger city rising out of the ruins and it was realistic to start thinking about it. He would not rule out the need to knock over whole blocks of the city and some of the character buildings they would have once fought for may have to go.

“There is some discussion that that is a building we could rebuild brick by brick, stone by stone. We need to find some symbols like that. The scale of what has happened here means we will have to take some bold steps. We have got to have a safe city going forward.”