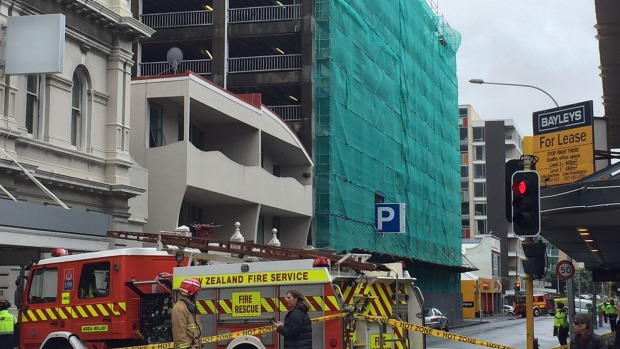 Following last week’s large earthquake in Kaikoura (now uprated to 7.8, which is a sizeable monster), a number of buildings in Wellington have been cordoned off, and so far, three buildings have been slated for demolition. They are:
the former ICI House (designed by Stephenson & Turner, constructed 1962-65) in 61 Molesworth St.
the Statistics building (designed by Jasmax, constructed 2005) at Centreport.
the Car Park building next to Reading Cinemas (design: ?? for Chase Corporation, built approx 1988 as part of the Wakefield Centre) in Tory St.

The Architectural Centre has posted a quick guide to ICI House. Fletcher Construction were the main contractors, and Rankine & Hill were the engineers. It was a prime candidate for possible future modern heritage listing as a piece of good looking modernism, clean lines and nicely proportioned, but hardly setting anyone’s hearts on fire. Arch Centre says: “The designers of ICI House paid particular attention to its detailing, especially the articulation of the faÃ§ade, and fenestration details. Its careful consideration of massing and orientation is sympathetic to the neighbouring cathedral and the building was planned to prevent as much obstruction of sun and outlook from other buildings as possible. It stands as an elegant structure in a well proportioned streetscape context.” Owned by Prime Properties, it now seems a done deal that it will be demolished: a giant crunching crane?!? has been ordered for next week. RIP ICI.

Regarding the Statistics NZ building (also built by Fletcher Construction), Jasmax notes on its website that: “The building was specifically designed to the requirements of Statistics New Zealand, allowing a strong connection with members of the public in a variety of spaces on the ground floor, and effective work areas on the upper floors. Rather than being a traditional central core office building, the core design creates a space that provides for a large glazed stairwell and breakout spaces in addition to the traditional lift lobby space.” The following photo from their website shows the interior of the Cafe on the ground floor, and then a photo from Stats Facebook page, showing views from the outside, with what appears to be a beam of some sort crashed in the Cafe space.

How can a beam fall by itself, and what happened to the floor it was supporting? This makes no sense. I’m looking forward to that official government enquiry! What’s more, if this is a beam, and not just part of the ceiling in the cafe, how come it is broken – the wrong way? It seems unlikely that this picture is actually a concrete beam, but in the absence of further information, all anyone can do is speculate and wonder.

Interestingly, the Arch Centre also has a recent rant about planners, which throws up some interesting comments about the car park at the Wakefield development, where it says: “At the time we had recently finished the largest car-park in Wellington for the infamous Wakefield Centre. The Wakefield site was huge with frontages on four streets. It had immediate passenger transport, and doubtful views, perfect for Te Papa. They decided they needed car-parks under Te Papa. This is the most expensive place for them. They need to be 100% NBS using 150% of loading stats. On the Reading site they would have had too many car-parks as many people wonâ€™t drive all the way to the top, and the top floors stay empty.”

Yes indeed, the car park building was the first step in a giant project planned for central Wellington by the evil Chase Corporation, one of New Zealand’s most hated and despised developers, of whom it can safely be said: all their buildings were absolute shit. Mid City in Wellington: shit. Mid City in Auckland: shit. Office buildings around the country, in Auckland, Wellington, and probably out in the provinces as well – all of them were designed in a hurry, whipped up quickly and pushed through planning departments without much consideration of the surroundings, and the end result is that I think we can safely say that urban design consideration was less than successfully resolved in most of their projects. This car park building in particular, made to service a later, large office/hotel project which would have heavily shaded much of Courtenay Place, was extensively repaired last year in an effort to fix the problems with the ramps that the seismic tremors from Seddon caused. Evidently the recent Kaikoura quakes have done some more damage to something inside the building: apparently it is now on a bit of a lean. Not a good look. Not so much listed, as listing.

I’m going to go out on a limb here and say something that may seem obvious to some people, or may be completely anathema to other people: none of these buildings actually need to be demolished: they could be repaired. It’s difficult to be certain on anything without seeing the damage first hand, or reading any of the engineer’s reports, but this is all a massive Con-job – a collusion between the insurance industry and the property owners. All of these buildings are fixable, without a doubt, and none are actually in imminent danger of physical collapse. Anybody that tries to tell you otherwise is just bullshitting you. Nothing is actually going to collapse into the street.

The kind of collapse they are most in danger of is financial collapse. Let me put it this way: Say that a building cost $30 million to build. It is insured for its replacement cost, which in todays money is, say, $40 million. If the damage to the building is going to cost, say, $20 million, then if you were to go down the path of repair, and spend that money, the building will now always have a stigma, a slight stench of “will it fall down or won’t it?” – and who wants to rent a building like that? New Zealand is one of the most heavily insured nations in the world. We have private firms, reinsured overseas, and even have our own Government scheme, the Earthquake Commission, whose coffers were emptied and magically refilled after the Canterbury quakes. As far as insurance jobs go, this country is full of them. So, if you are able to convince the insurer that the building may cost more to repair than to rebuild, then the owner can take the money – and run.

A quick demolition, getting rid of an awkward or hard-to-rent building, and the owner is presented with a clean slate, a new fresh site, a tabula rasa, and $40 million in the bank, fresh from the insurer overseas. With the ICI House, it sounds as if the owner/developer has been looking for a solution to that problem for quite some time. With demolition underway, there’s a new solution to that awkward listed building situation. With the Car Park, already having spent millions on seismic strengthening on a building where no one can be bothered driving right to the top to park, and in a prime location where the ground floor could be better serviced by retail, making the most of the high traffic count nearby, the answer is simple: demolish the carpark quickly and build something else in its place. I’ll bet you that the replacement is not going to be a car park all the way up!

Stats House is a far more intriguing case, similar in some ways to the nearby BNZ. Both designed by Jasmax, although I’m unsure who the engineers were. Both built by Fletcher Construction, who are normally New Zealand’s pinnacle of excellence. Both of them seem to have had issues with services breaking loose from the ceiling area, which in turn have caused sprinkler pipes and air-con ducting to collapse the ceiling panels, onto the desks and the computers, with the sprinkler pipes spewing water all through the floors.

The BNZ building rework cost about $10 million to repair last time (all paid for by insurance of course). Not just new ceilings, but new carpets, new desks, new computers, new ceiling services, new seismic restraint to the ceiling services… They actually changed the NZ Standard relating to seismic restraint of services after the BNZ debacle, so it must be highly embarrassing to the industry that something has apparently happened again at the BNZ (although obviously nowhere nearly as badly as last time), but also at Stats (ceilings coming down, not sure about the sprinklers going off), although that so called “beam” still has me puzzled. The building is repairable though, although the bigger question remains: will the Stats department ever really want to go back in there again? Would it be better to take the insurance money and run?