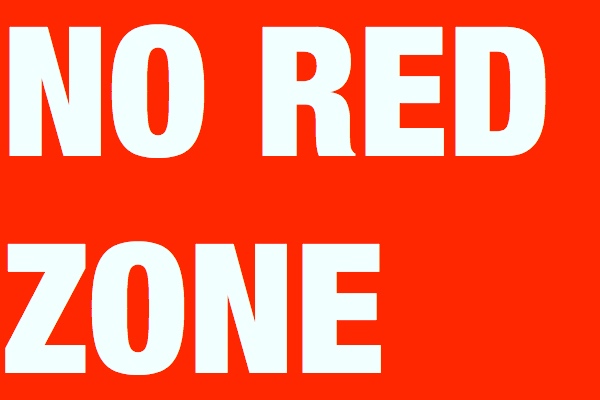 Following on from the previous post singing the praises of the structural engineers inspecting our buildings in the heart of the capital, this post is almost the opposite: don’t let anyone “Red Zone” our city. I’m not sure who is even promoting the idea, but it is not one to be taken lightly. Yes, we had an earthquake recently, and around a thousand aftershocks. Yes, we were over 100km away from the epicentre and so therefore we were not a direct hit, but merely peripheral damage. Yes, there are some buildings in the city that have been closed due to suspicious cracks. But NO, thank you, we do not need, nor want, a Red Zone.

The concept of a red zone was brought in to Christchurch after the Feb 22nd quake in 2011, when it was evident there was significant damage. Gerry Brownlee, as Minister in charge of the earthquake, would have approved it on behalf of his officials who advised this should be done. It triggered off the greatest demolition of a city ever seen outside of an ISIS video, and has lead to the virtual death of Christchurch’s CBD. At first it was just a series of orange road cones around a few key streets, but it soon became a chainlink fence stretching several kilometres in length, so much so that they had to ship in extra fencing form Australia just to contain the perimeter. No, I’m not making this up.

Inside the red zone in Christchurch, neither office work nor residential living was allowed. Inside the red zone, only men in orange hi-viz jerkins and white hard hats were allowed, because a orange hi-viz and a white hat somehow make you impervious to earthquake damage. People wanting to enter the red zone, to pick up books, medicine, personal belongings, work related info, hard drives, etc, were forbidden to do so, even if the person offered to put on a white hat and an orange hi-viz just for the occasion. They didn’t have the right badge, madge. If you couldn’t get their vital info, the old reply of “not my problem mate” would echo out, and pleas for an exception would be followed up by “its more than my job’s worth mate”, as northern England accents denied common-sense and logic and condemned these people to a financial death, while supposedly protecting them from a seismic one.

Inside the red zone, virtually every single building was razed to the ground. The city is a wasteland. There is no life, nothing moves, and no one has come back. Six years later, parts of the city are slowly being reopened, but it is too late. The people of Christchurch have moved on, either to Auckland or Australia. The army of orange coated officials and their road cones, are looking for new territory, to close down, “make safe”, and destroy.

In Wellington, I’m glad to see that we have a more sensible, more flexible way of doing things. Buildings are being assessed, one by one, rapidly, by a team of engineers, and when problems are discovered, the building concerned is closed off till further assessment is undertaken. Wellington knows that the worst thing Christchurch did was to cease to function. They drove the people away, out to the suburban shopping malls, where people already used to shop, and they let them build offices out there on the strip. The city died: the city was already dead. There is no need for a city there any more. The suburb has won.

Wellington is not like that. Wellington has no suburban malls (well, it has Johnsonville Mall, but that itself is dying), and instead the city is the centre. The people of Wellington are the lifeblood of the city, and indeed the city is vital to the functioning of the country. Wellington matters. No, seriously: Wellington City matters. If Wellington was to be closed down for six years, it would lose all its public servant roles, its home as the seat of government, and its people. It is vital that Wellington city does not declare a Red Zone and lock out the people who gather here to live, work and play. Wellington IS resilient, and needs to be even more resilient. But what Wellington needs even more than ever, is for its people to stay in town and stay working and stay eating and drinking and stay involved in the city. It needs its transport links back to full force quickly – and they are so, already, and it needs the mainstream media to Calm the Fuck Down.

Wellington does not need a Red Zone. It needs Green for Go.