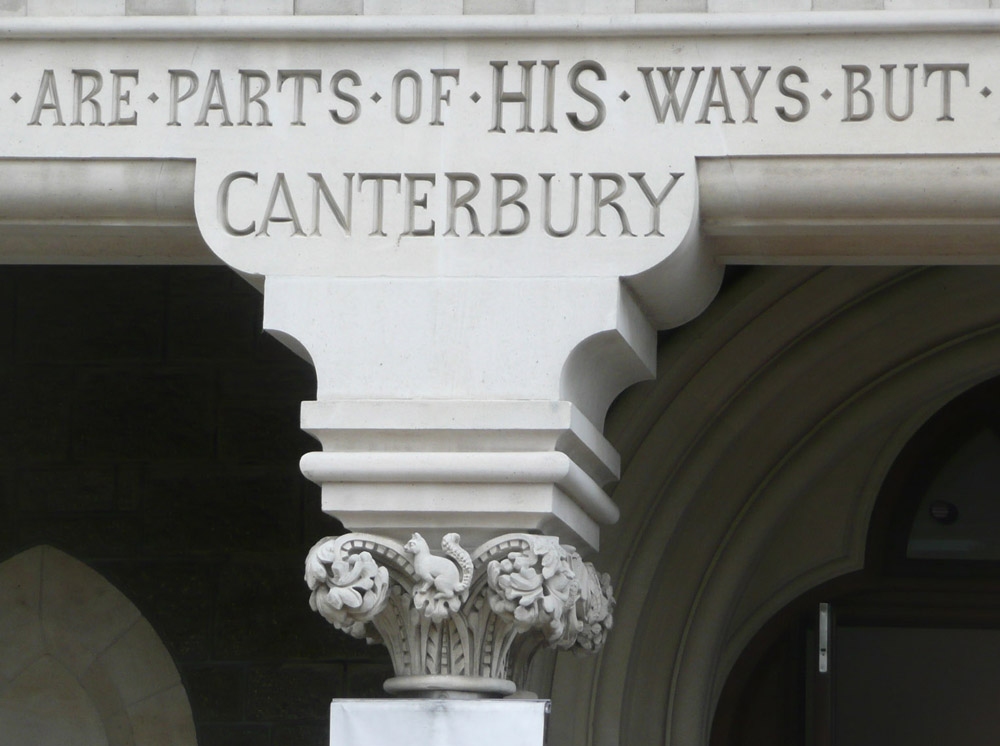 These is really only one story worth talking about in New Zealand right now, and that’s the big old stone churches in our southern sister city. Most of them have already been demolished, it seems, and of the few remaining there is great debate about what is happening and what should happen, and who should have the right to do what they want to. Me, personally? I just want to say one thing:

The Cathedral is History.

Not, perhaps, in the way that you might be thinking – as in, the cathedral is wasted, has had its day, and should be pulled down. Perhaps I need the emphasis in a different place. Perhaps I should really be saying:

The cathedral IS history.

Some people are saying that the cathedral is merely representative of a church that is outdated, is not what the parishioners want, has not kept pace with requirements of the liturgy, is symptomatic of a past life from England where our forefathers had different ideals, different beliefs, and different ways of building.

Other people are saying it is An Old Dunga and should be pulled down.

Other people are saying that it should be restored at all costs as a symbol that we can grow and survive this adversity.

As a young fish, I spent a lot of time swimming around the great waterways of Europe. Although I’m not a particularly religious fish, every time I came to a new town, whether intentionally or not, before too long I’d find myself in the cathedral, or the local church, marveling at the architecture. The blackened twin towers of Koln. The patterned roof of Wien. The impossibly romantic towers of Praha. The hunched back of Notre Dame. And oh so many small country churches in England, tracing back the history in the arches, looking for the Saxon plan beginnings, observing where the rood screen was before Henry’s men tore them down. Architecture written in stone. History carved in the timber of the trusses overhead. Flagstones in Westminster Abbey made of old headstones to graves – walking on the bodies of the ancient ones, till their names have been worn away with our feet. Looking up into the light filtering through the arched windows. The smell of the dust of ages, the patina of history, layer upon layer upon layer.

Buildings tell our history the way that no slick PowerPoint can do. Buildings can show the pagan roots of the pre-Christians, in Europe and in Aotearoa, and they can show the layers of people that have come and gone, architects that have had their imprint, builders that have carved their likeness in the gargoyles of York Minster, and the varying vagaries of religious beliefs and persecutions over millennia. The Hagia Sophia, one of the greatest spaces in the world, with it’s great dome proudly set aloft, was built by Constantin, in his religious battle with Justinian, over the future of the church in Europe.

In the battle between Christian and Orthodox that followed, the Mohammedians followed and they invaded the church and the country and converted it to Islam. But all future mosques have been built following religious trains of thought set down by Saint Sophia – there’s so much history it almost makes my brain explode.

Coming back to Christchurch, it really is quite a simple question. The Catholic cathedral, Our Lady of the Blessed Sacrement, is really buggered, and held together by massive walls of containers, buffered by hay bales to stop it collapsing. The cupola roof is off, and the Catholic church is sitting quietly down to figure out how, and where, they should rebuild. But to me there is no doubt that they will rebuild – as we all know, once a catholic, always a catholic. If they get you as a child, they’ve got you for life.

The Anglican church is a different story, but no less interesting. They’ve lost their way religiously, can’t decide if they want to admit gays and women or if they are still grumpy sexist old bigots. Certainly they have lost their congregations, and they’re also set on losing their church – or should I say, their Cathedral. I’d say they have lost their faith in the will of god – they’ve certainly lost their faith in buildings made of stone. But that is not to say that we, as a country, should lose our buildings.

The Christchurch Cathedral should be saved – saved from Bishop Matthews and her pagan flock of non-believers. Non-believers, that is, in that they do not believe that the Cathedral can be saved. Of course it CAN be saved, it is more a question of, do WE as a country have the will power to save it? Not as a home for the Anglican church – they have made it abundantly clear that they have lost the will for the battle over the bones of our timber and stone brother. Reducing the height to a wall 2m high is not saving it, it is genocide. It has a timber roof structure that barely has a tile out of place, despite the reported 7000 aftershocks. A new layer of history can be built that ties the old in with the new, that exposes the science and engineering of the new methods we have at our disposal, that gives confidence to the tourists who WILL come to see it “restored”.

Sack the Bishop. Sack the Church. Save the Cathedral.