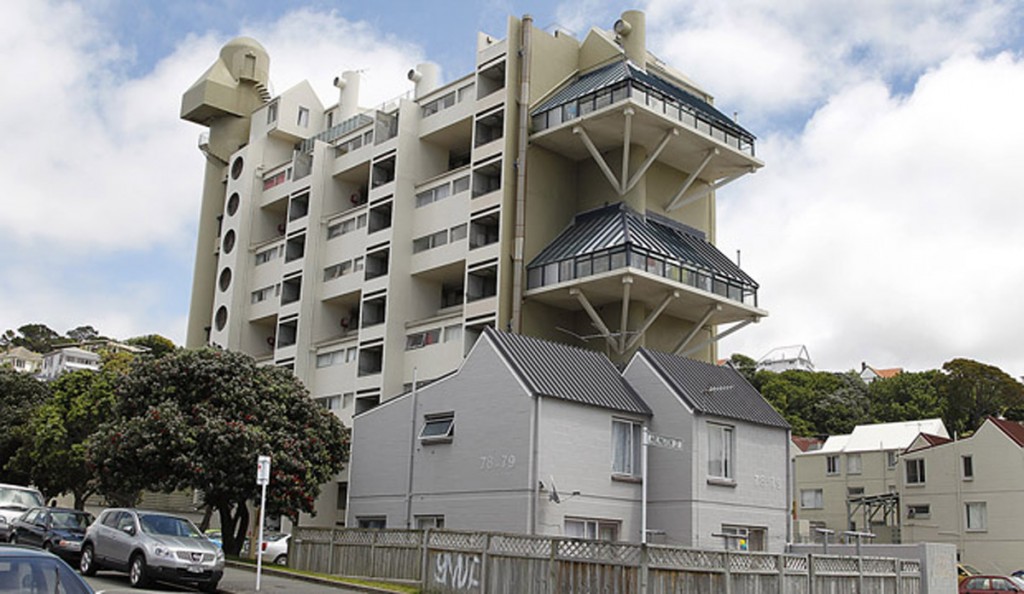 Wellington has the highest proportion of Council-provided housing in the country, and a large chunk of that housing is situated on Arlington St. You’re probably all familiar with Arlington as it is on one of the main routes through the city – but a lot of it is looking fairly run down right now. Some of it has already been replaced, with the soon to open, totally rebuilt, Novak and Middleton-designed, Hawkins-built housing that is present on Site 2. We last wrote about it here.

The whole city has been waiting to hear what is happening with sites 1 and 3. Those are the sites where the small-scale concrete block and harries houses are, in beige, looking a bit cold and sad. It’s also the site where the giant Arlington House tower is, the mad Athfield creation that is both loved and hated in equal measures. It’s iconic. It’s moronic. It’s fantastic. It doesn’t work. It’s tenants are, apparently, living in fear! It’s…. probably on its way out.

Developers have been running the numbers for various ways in which to replace the housing. None of the numbers are coming up flush. No one is talking publicly, not just yet anyway, about whether Arlington House gets toppled or not, but I think its a fair bet that it is not staying in its present form. Function has to come before iconic looks, and it just truthfully does not function well. But it could! It needs love and care and attention and a damn good replan, especially with those cantilevered skydecks poking out. They’re meant to be communal laundry spaces or something – but they overheat badly in summer and leak like a Welsh whale in winter. It’s one of Athfield’s greatest moments, as well as one of Athfield’s greatest disasters. Sorry Ath – you can’t win them all.

Anyway – there has just been an announcement over the Arlington sites – that Housing NZ is going to take them over for the rebuild, or at least, is “poised to”. The puzzling thing is that HNZ are saying these will be Kiwibuild homes, which seeing that Kiwibuild is meant to be a way for the private sector to be able to buy a home, seems to imply that HNZ are planning to sell the houses off when they have built them. I don’t think that is going to happen, so presumably the Stuff reporter has got their facts a bit twisted. Still, we (the public) don’t know who is going to build these houses – perhaps Phil Twyford does? We’re still none the wiser how any of the Kiwibuild or HNZ targets are actually going to be met. Anyone got any accurate information? Phil? Justin? Anyone? Bueller?

These houses are just the same. People I’ve spoken to say that there is no way the next phase of houses can be built the same way as the last ones. Novak + Middleton‘s medium-density blocks are built for the long term – all precast concrete slabs to provide strength and longevity as well as solid EQ performance, but they cost way too much for the Council budget I’m told, and they simply can’t build the next lot the same way. Watch this space…

In other news last week, the Council voted to cancel the SHA. The Special Housing Areas, set up by National, set up by Nick Smith if I remember correctly (incidentally – is Nick Smith the secret leaker of Simon Bridges expenses claims? Or is that too obvious? Or was it Whale Oil’s greasy spoon instead – Cameron Cockroach? Who knows? Frankly – who cares? Enough already!). The Special Housing Areas were a bit of a total train-wreck for Wellington – not wanted by the Council, not acted on by any developers, except for this very same development in Te Aro, which had its own special SHA. I think that they have now, all, at long last, been removed. We wrote about them here (an overview), and also here (on Kilbirnie) and especially here (in the central areas).

So I just went back to refresh my memory on what the SHA actually were. Greater Auckland was getting all very excited by this yesterday, with a guest writer Frank McRae getting rather excited and emotional over the axing of the Adelaide Road SHA. He was viewing the WCC action as “Wellington Councillors against Affordable housing” – and he is certainly very passionate about it. His post also appeared on the Wellington SCOOP website – no comments there yet, but over 100 on the Greater Auckland site. He’s now also posted his article on the Talk Wellington website as well.
“Wellington City Council has just voted, against the advice of their own experts, to remove eight key Special Housing Areas which were setup to help ease the cityâ€™s housing shortage. This is a move that will ultimately make it harder to build the houses needed to fix Wellingtonâ€™s broken housing market, exacerbating the cityâ€™s affordability crisis and the social problems that come with it.”
Here is the SHA area he was talking about:

McRae noted that “Adelaide Road, Mount Cook and its surroundings [has] CBD proximity and an abundance of open space” – although I would note that much of that public space is out of bounds, being either schools property, hospital property, Government House, or Massey Museum. Not actually free-to-use public space. But he also referenced the voting patterns of the Councillors, where he observed that:

“Councillors Calvert, Calvi-Freeman, Foster, Free, Lee, Pannett, Sparrow, and Woolf all voted against continuing Wellingtonâ€™s eight Special Housing Areas. Most hypocritically of these were the three Green Party councillors Free, Lee, and Pannet. The three Green Party representatives voted against the SHAs despite the fact that these would enable the city to grow in the most sustainable way possible, and despite the social justice issues that stem from unaffordable housing.”

Is this fair criticism? I’m inviting all those Councillors to respond if they wish, although to date only Andy Foster has responded on this platform. How about telling us, publicly, what the heck IS going on with Adelaide Road? Why so bloody slow? And if not a SHA for Adelaide, then how are you going to get it moving?