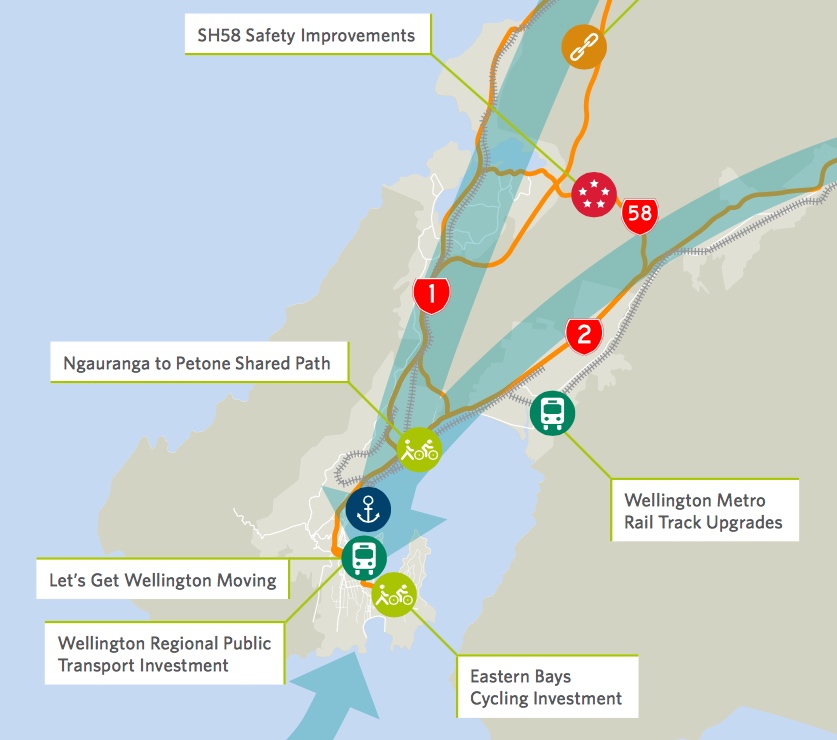 National Land Transport Programme – 2018 to 2021. We’ve had NLTP before, but this one is different. This is the first time, to my knowledge, that the NLTP has so openly included not just transport solutions for cars and trucks, but has also included funding for cycleways, footpaths, public transport, and most importantly: including trains. Yes, you read that right: funding for public transport including trains.

You can download and read the entire national document here on the beehive website, but we are going to outline and concentrate just on a couple of pages buried in the middle, focusing on Wellington region.

INVESTMENT HIGHLIGHTS
â€¢ The $45m investment in State Highway 58 safety improvements will reduce serious crashes on the stretch of state highway by up to 65%.

â€¢ A $43m investment in the Ngauranga to Petone section of the shared walking cycling path will provide a much needed walking/cycling connection between Wellington and the Hutt Valley and increase resilience by building a new seawall that will protect the shared path, the rail line and SH2.

â€¢ Investment in the construction of a new four-lane median divided highway on SH1 from Peka Peka to ÅŒtaki will increase the efficiency of moving freight and people between Wellington and the north, and facilitate economic development.

There is plenty there to get excited about – not as much as we wanted, perhaps, but still: good things are coming. Commitment to the Great Ocean Way in the form of the “Shared Path” from Ngauranga to Petone – that’s great news. Sort of unlikely news too, because the place they were going to get the rocks for it (from the Petone to Grenada link road) has now been canned / delayed until they can figure out how to do it without digging the world’s deepest trenches through mountains. Looks like the cycle way project will have to source its own rocks, not insurmountable, as Transmission Gully are already importing rocks from te Wai Pounamu by the barge-load.

But wait: there’s more. In fact, this picture above is only half of it: if you go further north, here’s another half of it:

Commitment to the Peka Peka to Otaki section of SH1 was never really looking in doubt, its just a matter of timing. And route. And hopefully not money. But the part we’re most excited by and interested in, is of course the snippet at the bottom:

Let’s go over those words again:

The image shows a tantalising picture of a train of some sorts. Is this just the other end of the line of the train image in the Hutt? Are we reading too much into it by noting that the image appears to be slightly south of the Wellington Railway station? Do the words “better public transport, a smarter transport network” mean to you, what they do to us? Should we get our hopes up…?