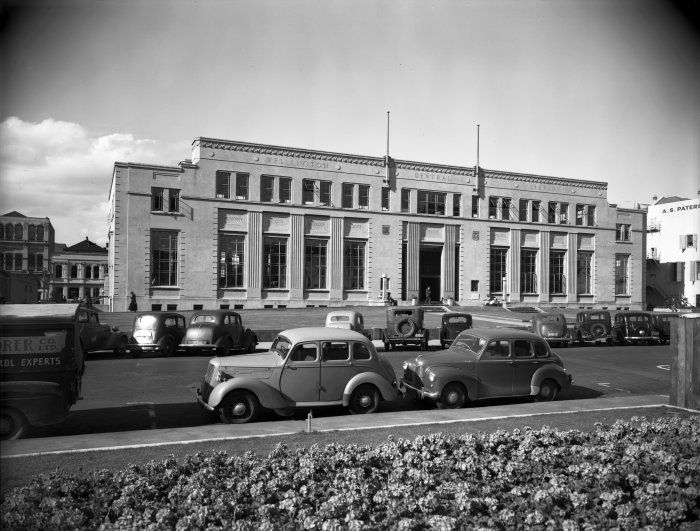 New Zealand doesn’t really “do” public plazas very well, in the overall planning of our cities: we’ve tried, but they really haven’t worked. Each city has one: Dunedin has the Octagon, Christchurch has Cathedral Square, Auckland has Aotea Square, and Wellington has Civic Square. Continuing on from that, Palmerston North has The Square, Napier has Clive Square, and most of the rest of our towns have an optimistic Village Green.

But none of these really work as they were meant to. The “town square” was meant to be a place where “the people” feel at home, to gather, to talk, to rally, and at times, to protest. Beijing has Tiananmen Square, Berlin has the Alexanderplatz, London has Trafalgar Square, Prague has Wenceslas Square and Sydney has Bondi Beach. Beijing, London, Berlin etc certainly have had large public protests in the past, some working out better than others: in some countries they send in the tanks earlier than others. The Fish was there in Auckland when the Queen St riots happened, was in London when the Poll Tax riots occurred, and got to Prague just after the Velvet revolution happened – what can I say – I like a good public participation! The city comes alive! Well, not so much in Tiananmen Square….

But in Aotearoa, we’re not really at home in our “home squares”. The Octagon has a large church on one side, and pubs and hotels on the other side, but largely it is a failure as a public space. Cathedral Square no longer has a working cathedral, and is just a site for spectacle of political failure, if nothing else. Auckland’s Aotea Square is the most dire abandoned quagmire, with the world’s ugliest “opera house” on one side and crass commercial ugly 90s architecture on the other side. The Auckland Council themselves have deserted it, permanently. And in Wellington….. …..?

What do you do when the City Council abandon the very heart of the Municipal Centre that they created?

Wellington’s civic heart was not always like this. And not always here. (In fact, where was it, originally? – I’m asking because I honestly don’t know). The Council may have always been here, but the people were not: what is now Te Ngakau – used to be Civic Square – before that, used to just be Mercer St, full of cars. No public plaza. Council offices on one side, Library on the other side. Car park in the middle, no place for people. Was Wellington’s real public square actually the waterfront?

In the 1990s, of course, Athfield Architects, and architect Stuart Niven chief amongst them, changed Wellington forever. Closing off Mercer St to traffic, removing the cars, converting the Library into the City Art Gallery, creating a new Library right on Victoria St, and then building a new curvaceous Council block on the other side of the square, the project had a truly transformative effect on the capital. Combined with the creation of the City to Sea Bridge, the installation of an underground car-park, the raising up of the plaza, and the physical link from Civic Square to the shores of the harbour, Wellington finally had a real public space – a place for people to unwind, to gather without fear of being run over, and lately, to play soccer.

But now we have a chance to do it all over again. The Council are moving out, first out of the top floors of the Library and then out of the Municipal building as well. They’ve already moved out of the big pink sausage as well. Capital E has moved out, long time ago. The Old Town Hall, the grand creation of Yorkshire-born lad Joshua Charlesworth, is to be extensively renovated and then leased? sold? to whatever Vic Uni calls itself nowadays. The Mayor used to be in the Town Hall as well – no word on whether that role is coming back.

I’ve a suggestion for the Council as well, while they’re making up their minds if they ever want to come back. The one thing that kills the vibe of any outdoor space is having office spaces at the ground floor. No one ever wants to see the Council officers sitting at their desks at lunch time. Wellington City Council should, right now, plan to rent out all the ground floor space for cafes, restaurants, a few small shops etc, and make sure that the place feels like a swarming tourist mecca. Not just tourists either – a place where Wellingtonians feel at home. Our collective living room. Our front yard.