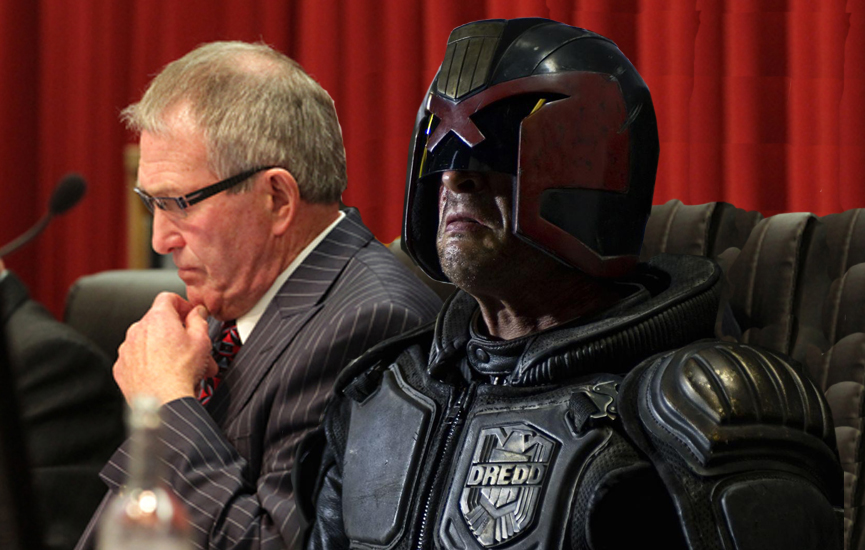 â€œItâ€™s a tragedy that the actions of a tiny minority of people have succeeded in holding back Wellington for years to come. Their opposition to the Basin Reserve bridge project will cost countless jobs and has other significant ramifications. Wellington could miss out on around $465million of investment.”

So says the current head of the Wellington Employers Chamber of Commerce, according to Scoop. John Milford, who sounds like a rather histrionic little bugger, is having a hissy fit like a blue-arsed fly, claiming that the lack of a flyover is nigh on the end of the world for Wellington, and that there is not much point in living (here) if a flyover is not built pronto. He even suggests that we should just do away with all this legal mumbo-jumbo RMA stuff, and suggests that the Government should just change the law to make it happen, just as they did with the Memorial Park.

â€œThe decision from the board of inquiry beggars belief. Itâ€™s fortunate that the National War Memorial Park and Underpass didnâ€™t have to go through the same process. That project was able to get the green light without the bureaucratic and NIMBY (â€˜Not In My Backyardâ€™) dominated board of inquiry process.”

I’m interested to know more about the quality (or quantity) of this guy’s thought processes. Yes, the RMA process is a long and complicated one, and there are times when I wish I didn’t have to go through it when getting permission for a simple thing like an extension to a house. But I must. It’s the law. Arguably its a big hammer to crack a small nut like a residential alteration, but then it’s point is that it also cracks the big nuts like the Basin Bridge flyover. If the alternative is that the big projects don’t need to use it at all, then I’d rather scrap it for the small projects as well. Management of Resources. Fooey. Who needs that environmental crap. We should just be able to build whatever we want, wherever we want, whenever we want. I’m sure John Milford would agree. In which case, I’m sure he won’t mind if I decide to build a 9-storey block of student flats in front of his nice house in (probably) Roseneath, taking all his daylight and view. He won’t mind, because it is all part of that drive to streamline development under the RMA and do away with red-tape and Nimbyism. You clearly aren’t a Nimby, John, so you wouldn’t mind at all, would you? Maybe I’ll see if I can get some friends in the National Party to pass a special law in urgency, overnight, for me to build that student block, so I don’t have to go through that terrible waste-of-time Nimbyish process. You’ll love it, honestly John, you will.

So my big question is: what is this investment of which you speak John? Is the investment solely in the infrastructure? Does paying Downers Construction and Fulton Hogan $90m for a concrete bridge really help the city that much? Yes, there are jobs for a year for some highly skilled concrete workers, but to be honest, a lot of that money goes to the transport contractors, who own and run the trucks, the diggers, the machinery of construction. In turn, that money goes back to Komatsu and Caterpillar, who make the machines, or to the quarries, who supply the gravels. Big spenders, those Horokiwi folk. Always flashing their millions around. More money goes to the companies who have the contract to supply the diesel, which is one of the main components of any roading company. Big machinery eats through millions of litres of diesel – and the cost of this includes a massive tax return to the government, who tax that diesel. Import duty, on fuel. When it comes to teansport, as they say in the wheel business, what goes around, comes around. Ultimately, the rest of the money goes back offshore, to the US giants like Mobil and Texaco. Money to the workers on the ground, about 200? on the Memorial Tunnel project, is worthy, but for the most part, these are probably not highly paid, highly skilled jobs. So, not a lot of productive investment in the city there, unless you pay the labourers a lot more. There is a lot of orange-overalled workmen on the War Memorial Park, they look like they could do with a decent feed, while they direct the traffic up to Massey. Maybe pay them as much as the specialist witnesses who testified for months on end at the Basin Bridge Inquiry, as I’m sure they all got well recompensed for their words, and that money got reinvested in Wellington via their use of restaurants and hotels.

Investment in a project like a Weta Workshop film is truly great for Wellington – when Peter Jackson gets a film deal for (say) $465 million, that money gets spent on 2000 highly skilled employees, over a series of years, who spend it on food, on housing, on enormous amounts of coffee, on leather-workers and blacksmiths, on computers and computer operators, on jewelry makers and swordsmiths, on shaders and faders and graphic matte artists, and not forgetting the army of 20,000 extras on the Lord of the Rings and probably a similar number on the Hobbit, all of whom live and work and eat and breathe in Wellington. That’s a real investment in the city, to me. By comparison, the economic advantage to Wellington when building a bridge is all a bit, well, … meh. Investing money in a poorly thought through solution so that cars can move from being in a traffic jam on the ground (at school term time), to a situation where cars can sit in a traffic jam high up on a flyover (because, let’s face it, there are still four sets of traffic lights before they get to the motorway on their way out of town), is just not that great a saving to me. I fail to see that as much of a success story for spending money.

John Milford goes on to say that:
â€œThe traffic congestion problems at the Basin are not going to go away. The Chamber has said all along it is a major congestion point on the road which links the city and the region to the airport, Wellington hospital, and must be fixed. We are a year on from being handed down a death sentence and just 8 weeks out from the general election. The city cannot allow it to compromise other projects such as the $375million second Mount Victoria tunnel, and the $268million bus rapid transit network between the CBD and southern suburbs.”

A “death sentence”? Really John? Are you sure you’re not just having a bad day? There was no traffic jam there today on the two occasions I drove through there. No sign of death sentence. There was a blockage on Jervois Quay however – is there a death sentence there as well? There was a man parking slowly in my street, he spent ages reversing in, and i could feel that death sentence approaching quickly, like an active series of irate verbs looking for a past participle to punch. Where must I beware of death befalling me so suddenly, please tell me, I beseech thee….

I jest, of course. Yes, investment in some new roads and tunnels will bring us all some prosperity, 90 seconds worth of extra time per day, each. I can’t wait to spend my extra 90 seconds on, ummm, maybe a muffin? Or enough time for half a cup of coffee? Maybe a – no, sorry, my time is up. Used my 90 seconds worth already. Damn.

Sorry, jesting again. Are there really international investors, pockets bulging with millions of dollars of ill-gotten loot, raided from Mosul, or Dometsk perhaps, and needing a city in which to invest? Would they put that money in a bank, a nice Aussie bank perhaps, of which we have four to choose from, or would they invest it in a flyover to nowhere? Does that sound like a sound investment? Should we seek out famed Asian investor Dong Hua Liu, or Lui, he of the “bribe everyone equally” fame, he who has toppled many Cabinet ministers in his efforts to invest in New Zealand – perhaps he would like to invest in some cheap student housing around the Basin perhaps? Design quality standards not necessary, as they are only for students, and they’re hardly human, so don’t worry about light, or space, or sound, or air. Those are all optional extras for rich people. Is this really the investment of which you speak? Or is it just more construction companies and a big diesel bill that is the sum total of “investment” in Wellington, that I should be so scared of, if we don’t get?

How about this for a suggestion: instead of fretting about not spending $90million on a bridge, or $465 million on several tunnels and a bridge, and then having to pay tax for years to pay the interest on the loan for that huge lump of money, how about we save $90million and don’t build that at all? Isn’t saving money a better investment than spending money on worthless goods? How about we instead spend $90million on something else? Anything you like. Built by Wellingtonians, in Wellington, which enriches lives, and employs people, for life, not just for six months. Suggestions, please John, and others, for what $90million would be better spent on than a bridge.