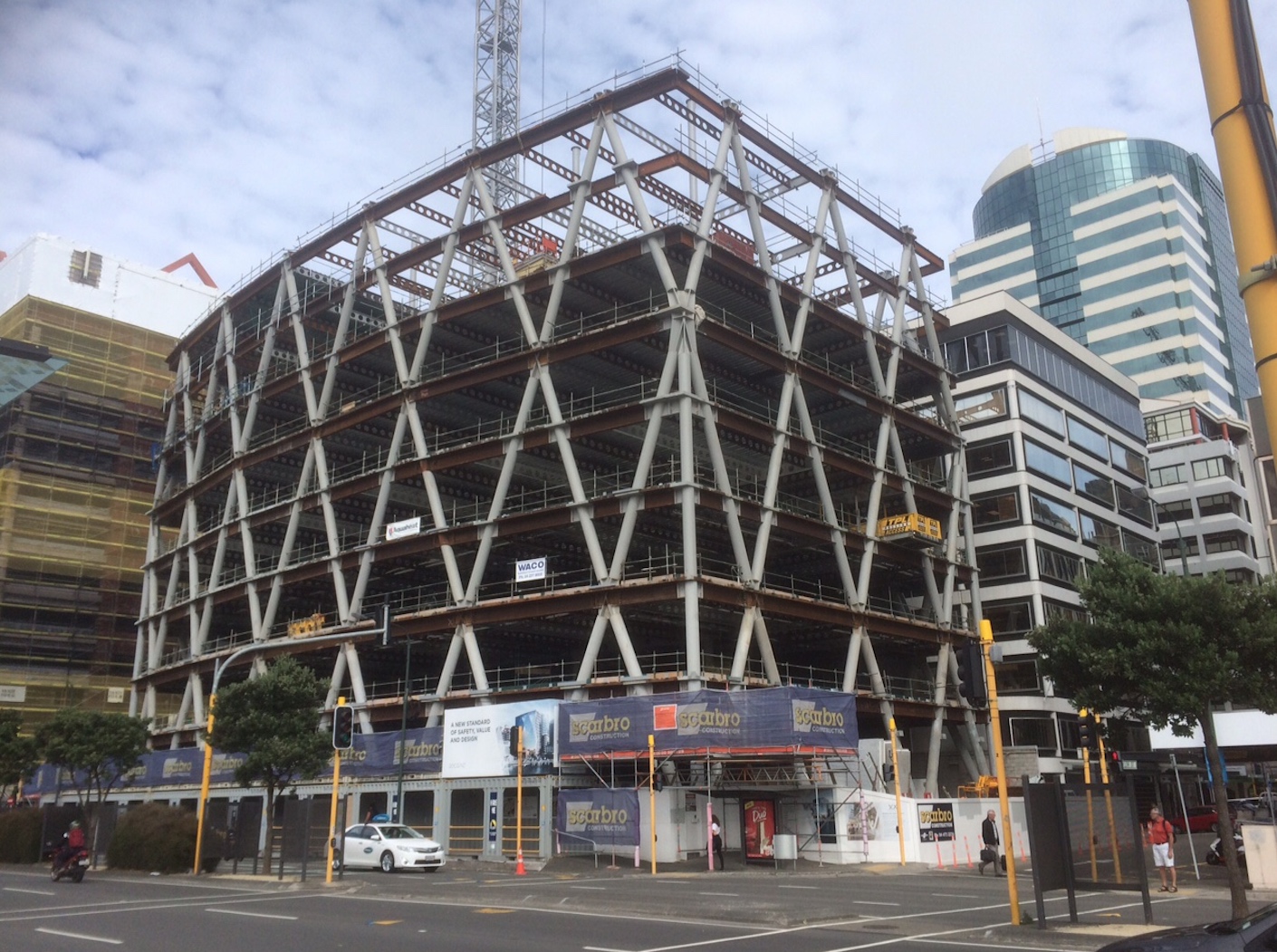 There’s a new building in town, going up on the waterfront, and I’m sure you’ve all seen it by now. The 20 Customhouse Quay project (code named XXCQ) is already proving to be the most interesting building in Wellington, and technologically, perhaps the most advanced structural solution for a high rise in the whole country. It certainly has me intrigued.

The project is definitely visually very different from any other building in Wellington. It is externally supported by a diagrid of criss-crossed steel tubes, and these sit on a perimeter of base isolated foundations. Diagrids are cool – inherently much stronger than a more straightforward orthogonal grid, and consequently much lighter in terms of tonnes of steel used – there’s a saving of something like 20% of the steel used. The other prominent diagrid tower building I know of is the Hearst tower in New York, built a few years ago by Foster and Partners.
We covered that similarity in a couple of previous posts on this site, here and also here.

The building is on the site of the former BP House, which was demolished or so a year ago, being a bit old and shagged out. Probably just in time too, considering the recent shenanigans over tall buildings on reclaimed land! Prime waterfront location that it is, the site was always going to attract attention, and the resulting development is making the most use of its fantastic views overlooking the harbour. Far be it for me to suggest that the staff who will occupy the building may want to do some work occasionally, but the temptation to stare out the window will be pretty overwhelming…

Architects are Studio Pacific and Engineers are Dunning Thornton. Contractors are Scarbro, an Auckland contractor – at least, I haven’t noticed them in Wellington before. The Developer is Newcrest, the developer of the Vodafone building and NZI centre in Auckland (built by Scarbro for Newcrest), and the redevelopment of Shed 22 in Wellington a decade or more ago. This building looks like it will be Newcrest’s flagship development, certainly one in which they will be very proud.

The steelwork rolls in to XXCQ daily, with each giant row of X going up 3 floors at a time. This must lead to some interesting welding in the factory (Steelwork fabrication by MJH in the Hutt, or so the guys on site tell me) where it is being superbly stitched together, and I guess that the diagonal nature means that every time it clicks together, you know it is rigid and in the right place – you can’t lie with a triangle! Millimetre perfect? Is there a BIM model in play? Is the architect’s steel model the same as the engineers? And are they both the same as the one that MJH is working from? You’d have to hope so – there is no room for errors here. Super stiff!!

The downside of a diagrid, if there is one, is that you have structural elements go racing past your window on an angle, but that actually makes the view more exciting rather than less. The NZI Centre in Auckland is a mini version of a diagrid I suppose, but I think this is the first time we have seen this technology on such a scale.

Once the 3-story high perimeter is in, the floors are installed (i.e. steel decking and concrete laid), top floor first, and then the two lower floors. All the beams are on site with large numbers of holes already punched through, for maximum services flexibility as well as a saving in the weight of the steel used. Altogether, it’s such a clever building – we should do this more, and I’m guessing that from now on, we certainly will. Glazing this structure is going to be interesting as well, and now that they are up to about level 9, the glazing probably isn’t far behind.

We can’t see the base isolation at present (and we may never see it either, as it may always be covered over) on this project but it has never been done on this scale before in NZ to my knowledge, i.e. a 14 storey building. Obviously piles will go deep down through the reclaimed land down to the bedrock on the seabed, and at basement level there must be a complete set of steel, rubber and lead bearings that function as the base isolation. We’ve got this feature in a few buildings in Wellington that I know of, with the new buildings (Wellington Hospital, Te Papa, etc) being easier to install it into than the existing buildings where it has to be retrofitted (Parliament, and the old Town Hall – one day!). Probably not on Defense House at present, but maybe it will be for the rebuild? :-) What I like about this is that it is a New Zealand developed system, and moreover: a Wellington developed solution (well, the Hutt really…). It’s brilliant. The Japanese use it all the time on their tall buildings as well as their low buildings, but this is the first time we have done it on a 14 storey tower. There is a video from Japan at the time of their massive earthquake / tsunami event in 2011, taken from one of the tall office buildings, and all around the buildings are gently swaying, presumably all on lead/rubber base isolators. None of those buildings fell down – not so much as a ceiling tile was displaced in central Tokyo in these base isolated buildings. Quite a difference from our un-base-isolated buildings here…