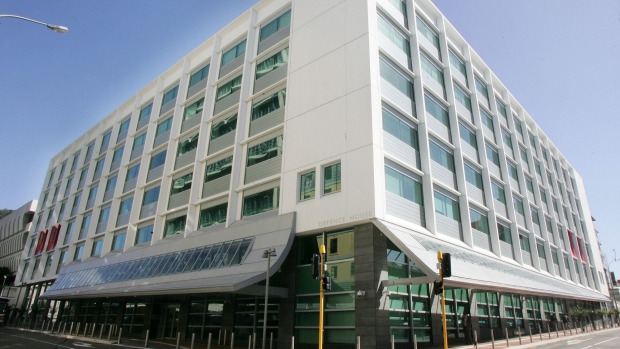 So – the worst kept secret in Wellington is out at last – Defence Force’s HQ, Freyberg House, is to be demolished. It’s perhaps no great surprise to those in the industry, who have heard the rumours before now, but it is sure to be a bit of a shock to many Wellingtonians. There is, of course, another building that will probably also have to come down – but the statistical probability of me saying what building that is, is just too high.

But it is fair enough that Wellingtonians get upset about this forthcoming demolition – these are new buildings after all, just a decade old, and therefore are, broadly speaking, the same system as other modern buildings are being built today. In short: the public will (or already has?) lose faith in the ability of architects and especially engineers, to provide a decent stable structural solution. We (arch and eng both) will get castigated for the failing of Freyberg House – and rightly so.

The building looks untouched from the outside. The precast cladding panels and double glazed windows are still in impeccable condition. There are a few cracked tiles in one corner, and a disturbing lump in the pavement up the street opposite, and the blinds are all drawn, but you wouldn’t really know a thing was wrong with the building otherwise.

You would be wrong. Inside, apparently, there is a scene of devastation – and it wasn’t until today that I heard the real reason why. I had thought that maybe, like a few other recent buildings in town, the services in the ceiling had collapsed and brought the ceiling tiles down on top of the desks, setting off the sprinklers etc, but we heard today a quite startling thing that had happened – that it had fallen off its base isolation.

I’m staggered on two points – one, that it was base isolated in the first place (why wasn’t I informed of this?!?) but secondly – that a building could actually “jump off” it’s base isolated foundations!
I’m not sure whether I believe either of those stories – but it may explain the odd lump in the pavement to the north. If, indeed, the building had base isolation, then that may explain why the footpath was a bit mashed up – the building was swaying to a different rhythm than the earth. Pounding, in effect, very low down. But also : if the building was in fact base isolated then this could also explain what happened – there wasn’t an adequate movement joint installed around the edge of the building and so when the building swayed on its rubber piles, it effectively ran into a solid wall and battered itself off its own feet. It was, literally, left defenseless.

This is not a good state for any building to be in – and I can’t wait to read the official report, which was to have been released but is now delayed till April. Of course, there must be more to it than that. Do you know what it is? Tell me more !!!