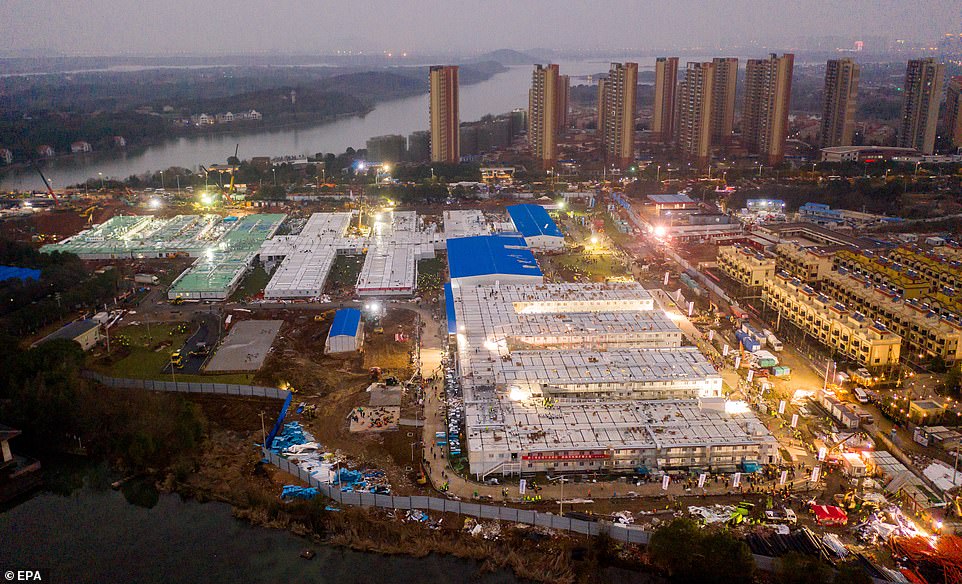 I’ve been a bit quiet lately, not because I have the Wuhan Flu (no – god forbid it comes here!), but because the weather has been gorgeous where I am, and I simply can’t be arsed to tap away on a computer inside while the sun blazes away outside. And besides, you guys have been quiet lately too.

But this horrible flu thing – I can’t make up my mind whether it is all a media beat up (they keep saying it is far less deadly than ordinary flu we get every winter in Wellington), or if it truly is a virus portending the coming end of the world. Or is it just a pan-species virus that has crossed the boundary into human life, due to foolish eating of species that are best left alone? Divine retribution for eating pangolins into near extinction?

In terms of the Wuhan corona-virus thingy though, there is one thing that truly stands out to me, as it surely has stood out to you too. Yes, I’m talking about the construction of a 1000 bed hospital in just 10 days. To say that is well beyond the capabilities of a New Zealand workforce is a gross understatement: that sort of progress is well beyond probably any other nation on earth. I mean, we could not even get Resource Consent for a new Hospital in Wellington in under a decade, as I seem to recall it being endlessly discussed for years. Design time took years, Building Consent approval took many months too. Construction time for our hospital also took years – two? or more? – which is nothing to be proud of. We’re also going to have to go back and replace all the copper piping in the Hospital at a cost of umpteen millions, due to it being cheap Chinese shit copper, apparently, which makes it even more odd that China seem to be using their own copper over there with no problems at all. The world is a mysterious place at times.

But over in Wuhan province, they simply cleared a site and started pouring concrete, as these accompanying photos show. Not sure if you have seen these before – I’m surprised that this isn’t being plastered over the front pages of every newspaper in NZ. Inevitably the cry will go up in the letters to the editor every time something is scheduled to be done slowly and carefully: “But in China they built a hospital in just 10 days!”

I’m not sure exactly what was on the site beforehand, but whatever it was, it did not last long. Indeed, 10 days later there was a whole, fully functional fever hospital, produced with astonishing speed and now, apparently, fully functioning.

It was, of course, a triumph of prefabrication – it simply could not have been created any other way but even so it was still a marvel of engineering and project management. Perhaps not a marvel of Architecture, but impressive nonetheless. I mean, how long would it take here to draw up a hospital of 10,000m2 let alone do the detailed design for it. Clearly, however, someone has been here before; and let’s face it, an authoritarian dictatorship really gets things done when they want to.

So, hundreds of diggers were brought onto site and the earth heated into submission. A slab was poured across the entire site – with some mesh – that’ll fix it! Although the site operatives do not appear to have to need to level it accurately – trudging in gumboots appears to be the tool of choice, instead of a theodolite.

This being China however, manpower is not at a shortage, and I think i read somewhere that they had over 1000 “machines” and over 4000 human workers. This is the hive concept in full flight – human worker-bees, all working for the greater good, with one common concept in mind.

The concrete is barely dry before the next layer goes on, suspended above the concrete for reasons I’m not quite sure why. The prefabrication system after that appears to be a homage to Phillip Johnson of sorts: steel posts and beams, with infill SIPS style floors and walls. Even the ground floor.

It’s up – it’s off – it’s running away with the prize for quickness.

The photos I’m trawling through are a mixture from at least two different hospitals, so I’m not exactly sure, but this appears to be where the services ended up: stuck on the outside. It ain’t pretty, but then neither is dying from corona-virus.

Clearly, the system being used is based on container framework – a clever use of a universal rugged system that the Chinese economy already produce in vast volumes.

Not quite sure how they plan to waterproof between the container roofs – probably a large piece of sticky sealing tape, although they could perhaps also be planning to put a proper roof on over the top later, although I suspect not. I think they’re done now.

So what now? Will this work? My best wishes that it does…