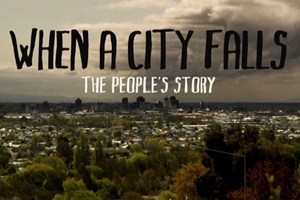 I can’t recall the last time I sat and cried all the way through a movie – maybe it was a love story or maybe it was a tragedy – but this time it was a documentary. What an extraordinary film. Go. See. It. Now.

Filmed by Christchurch resident Gerard Smyth, When a City Falls is a quite remarkable documentary, of fascinating interest to engineers, architects, and kiwis alike. I’d recommend almost everyone to go and see it – except perhaps Cantabrians who were actually there. I think it honestly be all a bit too much like the real thing all over again – certainly i wish i had bought a box of tissues with me, as my eyes kept on streaming all the way through the movie. Quite, quite extraordinary.

The special effects at the movie theatres nowadays are very real, and I remember seeing the Lord of the Rings films at the Embassy, with accompanying massive reverberations through the floor when those angry trolls of Mordor started to hammer away at a fleeing Frodo – so when the floor started to shake during the screening, for a brief second or two I thought that someone had developed Shake-o-Rama in order that we experience the Canterbury earthquake better. But no, it very soon became apparent that Wellington was having its very own shake – a relatively modest 5.7 over near Picton, apparently, although there has been some damage reported in Wellington.

There is nothing quite as unsettling as watching a film about a city being destroyed by an earthquake, when you experience one at the same time. Synchonicity sings the Police, but I was more thinking – where is the exit door, and is the city falling down around me? After a good 20 second series of shakes, shudders and bounces, I figured that seeing as the film hadn’t stopped, neither would I, and I settled back in my comfy armchair, ready to meet my maker in a velour covered armchair, too low to the ground for me to hide under. The view from the rest of the audience was not quite so sang froid however – about a third of the audience had scarpered straight out the exit doors to safety as soon as the shaking began. It wasn’t just my nerves that were stretched to the Maximus then – as I turned around to see if anyone was staying in the theatre, I was greeted with the site of almost an entire audience wet-faced with tears.

Yes, I know that a 5.7 in the Cook Strait is hardly worth waking up for, let alone getting all hot and bothered about, but when it comes a day after the Dompost screams a headline of Seismic Shock, and half the courtrooms in the county are closed down due to seismic susceptability, then it really must be starting to come home to people – we’re living on a tinder-box here. Wellington is sitting on a time bomb, primed and ready to go off, and no matter how nice the weather has been here for the last couple of days, I don’t particularly want to die for the sake of my city. It’s not just the Green Dry Cleaners building that needs a strengthen or demolish sticker – there are so many more. But that’s the thing – if we sit around staring with our fingers in our ears, we’re never going to solve this question: how will we survive the coming Big One?

We could be proactive, and demolish all the old brick buildings, smash them all into rubble and have some nice shiny new prefabs in their place, like they have done in upper Cuba St. Or like they are having to do by de facto in Christchurch, where they have now demolished so much of their heritage that there really is little point in remaining in that poor, squidgy southern city of ours.

We could just shrug it off and continue to ignore the facts staring us straight in the face, hold our breath, and mutter “She’ll be right, mate” in that endearingly stupid way we have of (not) coping with problems in this tinpot country of ours.

Or we could be really clever, sensible, and innovative all at the same time, and instigate a publicly funded strengthening program for key buildings and key streets in the Wellington CBD. Yes, it will cost money, but it is futile to expect that the private owners will be able to / would want to pay for full strengthening on their own, just because the rest of us think their buildings are pretty. Get real ! If we like your building, and we consider it part of our – that’s OUR – townscape, then central funding has simply gotta happen. Time for some smart thinking about ways of funding this wave of much needed strengthening – let’s start right here in Wellington.