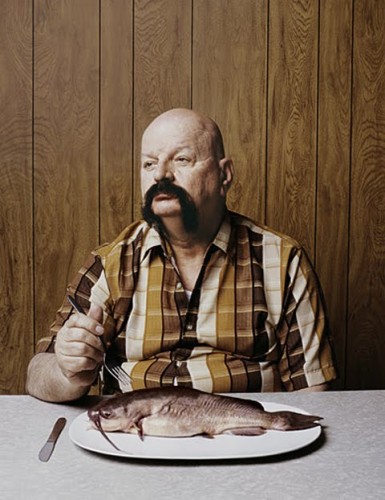 So, after 369 posts, 5034 comments, and more or less avoiding some 14,963 spam, we’re running a bit low on keen and willing writers here at the Eye of the Fish. Let’s face it, as a form of journalism / interaction with the public, blogging seems unfortunately to have had it’s day – it has become the MySpace of the digital world, as opposed to leaping forward into the growing realms of Facebook and Tweeting, as befits the continually shortening attention span of our – oh, look, a shiny thing! – umm, what was I saying?

Oh, yes, Tweeting. Twits and Tweets, Twittering in the Tweetosphere. I can’t be bothered with all that bunch of Twats really. I know, friends of the Fish have lambasted us personally for not being a Twitterer, but even I cannot be that imbecilic to try to say anything pithy or worthy in 140 characters. That’s not to say of course that we haven’t thought about it, or even tried – but with the world a twitter with the nonsensical rattlings of the inner recesses of teenage-era brains, there really is bugger all point in Tweeting about architecture. There is an art form in the concise text message, but little art in the haiku of sk8ter speak, although no doubt Robyn would disagree with me there, if she bothers to read this still. I wrote an entire short story by text message once, cut and pasted into SMS it came up as 53 pithy chapters, of an exciting tale of derring-do, so I am not entirely adverse to the idea of short and pithy communications, although my output lately has been more pissy than pithy, more escutcheon than escritoire, and sadly more flannel than flaneur.

Mostly however, writing a daily / weekly blog about matters urban relies on two or three things: an urban activity worth writing on, writers keen to write, and readers worth writing to. Of course the later is a foregone conclusion, fine people that you undoubtedly all are, although respondents have lessened over time; as I have got more boring, and you have got more bored with my being boring. Sorry. But the main issue has been the paucity of building as of late – as the construction market continues to stagnate, so too does my enthusiasm for continuing to try to comment on an art form (architecture) that seems to hold little sway in our broody mini Metropolis. Sorry to say, but the desecration of Saint Terry has taken a little of the fun out of the architectural scene – who else will propose such monstrosities as the “explosion in a bling factory” as Roger and Terry proposed for Cuba St? People are more likely to get worked up about a sign saying Wellywood than getting angst’d about a truly hideous monster like the Asteron House for the IRD. One little sign that is up for 5 years gets untold column inches, whereas a permanent despoliation of the capital for the next 50, some 17 times higher, gets little comment at all – what’s the matter with you all – do you truly just Not Give a Shit? Sometimes, truly, I despair.

Of course, other writers write for the Fish also, so the curse of the urban blogger does not fall solely on the (admittedly broad) shoulders resplendent beneath our shiny silver scales. As noted before, more than one author pens lines under the tag of Maximus: the message is more important than the messenger. True, we have had a checkered history with the writers at the Fish – one early writer, Aron, lasted only two posts and then disappeared forever, another quit before he/she even began, Minimus lasted erratically for a couple of fiery, brilliant invective posts, but then seemed to fizzle out, and recently Erentz posted once, a single, solitary, sensible soliloquy and sadly thence has been seen no more.

Exposees of the secret identity of our various bloggers are neither requested nor welcomed – if you know who it might be, keep it under your hat…. Our longest lasting writer, apart from the mouthy Maximus, has been Philip, the guru of the website, the brains behind our beauty, the only one willing to write without a pseudonym, but then again, sadly, it seems, mostly unable to find time to write at all. He is, it seems, too busy: clearly I’m not busy enough at all. Scoop’s: Lindsay Shelton says he especially likes the pictures we print. Why, thank you – but we can’t take all the credit, as we frequently borrow other’s brilliant images. In this case though Lindsay, this one’s just for you… As John Lennon once (nearly) said, “Happiness is a warm Fish”.

Our favourite author to emulate is the BLDG BLOG run by esteemed personage Geoff Manaugh, who writes so well, so excitedly, so prolifically, so authoritatively and so often – its hard to keep up with for those with full time jobs and less flexible occupations – but that is no excuse – he has turned his blog into a book, a career, a vacation – as well as a vocation. The quality in Manaugh’s work lies in the depth and breadth of the work he covers (or uncovers), in the same way that the Fish suffers from a lack of adequate research at times. Mea culpa. So if you like the Fish, and are keen and knowledgable, willing and able, here then is a chance for you, or any other white knight / knights / maidens to come riding in and write for the blog as well. Offers accepted via email to the usual address: