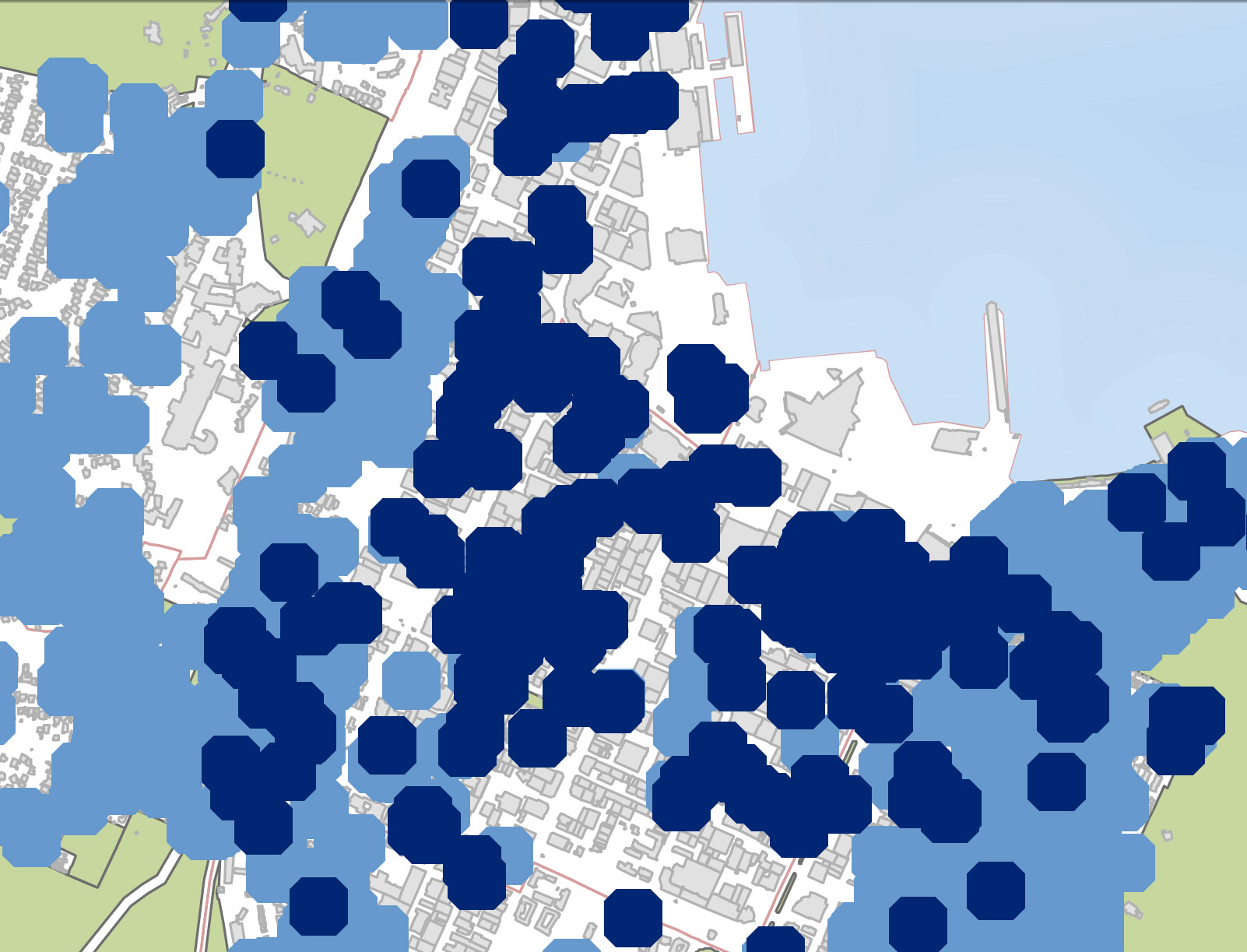 Sometimes you get the feeling that the world is trying to send you a message.

This is a map of brick buildings in Wellington – unreinforced brick masonry, or URM as they are now fashionably known. These URMs are going to be a headache for all of us for the next 10-20 years… Light blue shows a URM, dark blue shows you an old (pre-1939) URM. Basically, these buildings are all absolutely fine to be in, every day, until the day of a large quake – when, all of a sudden, they are not fine at all. Ring a ring a Rosy, all fall down…

Basically, as you may have guessed, if you’re in a building that is dark blue on both maps, then you’ve got some work to do. If you’re working or drinking down Courtenay Place, then we have this lovely colourful pattern to deal with. Somehow, we need to make sure that we don’t lose all our interesting buildings. Dark blue is where our heritage buildings, the character of the central city, exists. This is Courtenay – she’s not a pretty sight:

This is Cuba – really, not much better:

And if you’re lucky enough to be a civil servant, here is the Lambton quarter:

Wellington urgently needs to act now to retain our cultural heritage. The Wellington City Council, interestingly enough, is at last really getting into this debate, with a very thorough report being compiled for a meeting this Thursday. I’d strongly advise you to read the report, which was published alongside the maps depicted above. Click here, and then download Report #3.

One year on, Christchurch has been reduced to rubble, the surviving buildings being mostly flat blank tilt-slab facades, boring boxes with Harvey Norman stick on facades or anonymous car yards. We too will have liquefaction, especially in the Hutt and in Miramar, but quite probably on most of Wellington’s reclaimed foreshore as well. We covered it here a year ago. Encourage your local councilor to vote to increase the spending on Earthquake-strengthening Wellington’s buildings and civil infrastructure.

The Dom Post today has said that a lack of planning is hurting Wellington. The writer, Grant Stevenson, notes some of our issues and our challenges, but comes up with some suggestions to kick start us on our way:

“Architecture alone won’t get it right; Te Papa and the Events Centre proved that. We need the wider creative community involved. Capital cities are not just about government; they can espouse cultural identity and a spirit of adventure. How would Weta tell our stories of Rutherford, Snell, Pickering, Wilkins, Sheppard, Gillies, Hillary, Batten and Pearse – all currently ignored by this capital city? Some suggestions for change:
* If we sited the new music school and rehoused the two orchestras on the waterfront giving them a shared outdoor auditorium with weather protection, student vitality would increase in the central city.

* We could locate the new convention centre between Te Papa and Waitangi Park, and move the I-site to its foyer, where we could also tell New Zealand’s most profound stories to visitors.

* If we moved Te Papa’s hospitality and conference spaces into the new convention centre, they could serve both buildings, freeing up space for a new National Art Gallery within the high-spec Te Papa shell.

* We could reshape Memorial Park as an outdoor auditorium, making the national war memorial New Zealand’s most dramatic setting, especially lit at night, for performances and national days.

In 2015, Wellington will celebrate 150 years of its capital status. We need more than a set of stamps and a royal visit. We should launch a better way to be Wellington. New Zealand’s symbols of national identity are a sorry lot. Our national bird is flightless and endangered, our flag is outdated, our national day means controversy and our national colour is black. We could, however, have a national capital we take pride in. We worry about the growth and attention of other New Zealand cities but the real enemy, a lack of integrated planning, is within. We are a capital city, when will we start planning like one?”

So: when will we?

Postscript – and just as a reminder of what the Japanese have accomplished in the 11 months since their (far more devastating) earthquake and tsunami, here is a link to a series of amazing photos of Then and Now. One posted here just for you fish readers: