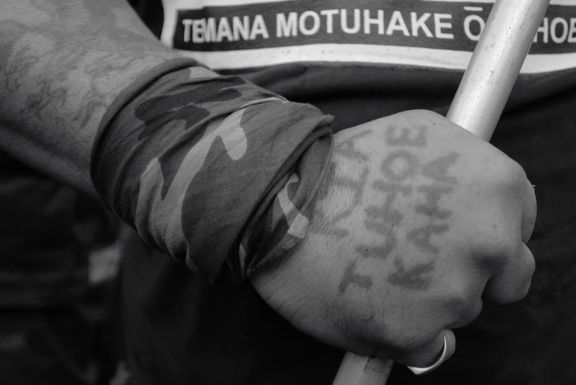 I know that this is straying away a little from our stated aim of discussing architecture and urbanism, but before we get back to discussing buildings on the waterfront, isn’t there something more important that we should be discussing? I’m talking about the current trial – I was away during the actual police raids a few years back, and so have never heard or seen anything about this before. I’m sort of amazed that there is not more discussion on this. From memory, there were a whole lot of people saying that the police had massively over-reacted, and that the charges were trumped up, but certainly the images being shown of a bunch of pseudo-commandos training in the Ureweras are worth raising a few eyebrows over.

What with the civil war in Syria, the continued unrest in Egypt, simmering tensions in Libya, outright civil breakdown in Greece, no doubt soon to be followed by rioting in other European countries as their economies collapse, we have been living in a wonderfully tension-free country here, if you ignore the continued rumbling of earthquakes. But this alleged warfare training by members of the Tuhoe, and their curiously naive scandic hangers-on, is a real eye-opener. We all know that apparently no member of Tuhoe signed the treaty of Waitangi, and so that some of them therefore consider that they are not part of the rest of New Zealand. That has been largely ignored by the Government for the last 150 years, and it has all been business as usual in this one-big-happy-family country of ours. I say “ours” advisedly, as I believe that we are in the lucky position of being an island, and not having borders with other countries. Imagine living in Bosnia-Herzegovina, where the boundary has changed continuously over the last 1000 years. They’ve been governed by the Turks, the Austrians, the Serbs, the Croats, the Yugoslavs, the Hapsburgs, probaly the Germans, the Russians, the Holy Roman Empire, and possibly even at some stage by themselves. Always rather nastily, with the rulings being at the point of a gun. Never quite the place for a quiet holiday.

Unlike the Ureweras, where the Children of the Mist live. Apart from some military encounters around 1840 or so, the Tuhoe have been largely left alone. Its not that onerous being a New Zealander, and while there may have been some impositions on residents all over our isles, like paying taxes, forcing buildings to be built to a rather wonky building code, sending your children to school so they can speak at least one language, etc, there have been some advantages. Like, we have a reasonable hospital system, a few roads up and down the country, and a handful of totally crap tv stations. Not a lot else really, especially in Tuhoe country. Luckily for them, no TV reception! But is it worth getting all military over, this running around the bush with guns, shooting at imagined nasty targets, building molotov cocktails and thermite bombs (like the ones the US Military destroyed the World Trade towers, don’t you know), and generally planning an imaginary armed insurrection? The naivity of the blonde man in cavorting with the tattoed heads in planning this battle is interesting too – but I don’t want to get into that. What is of more interest is how would an independent Tuhoe nation work within a surrounding Aotearoa? Would there have to be a roadblock on the road from Wairoa? Would passports be required? Seeing as there is no hospital actually in the Ureweras, would Tuhoe have to pay fees to attend hospitals like other foreign visitors, or would there be visitors rights?

It all ties in with the questions of whether “we” should be selling the Crafar farms to an overseas buyer. Whether they are Chinese overseas buyers, or Swiss-domiciled overseas buyers (ie turncoat corporate-raider pirate “Sir” Michael Fay), really doesn’t make much difference. Either way, the owner will live off shore. Either way, money to pay for that will have to come in from overseas banks. Either way, money raised from the sale of milk will be squirreled away to an overseas fund. Either way though, the money may be flowing around, but the land is staying here. And either way, it is no more accessible to you or me, whether it is owned by Chinese, Swiss, American, or Tuhoe. None of them can take anything away (except for the profit). None of them can change any of the laws and rules (except, perhaps, Tuhoe, at the barrel of a gun). What would be much better for New Zealanders is if the land was sold at reasonable prices to young New Zealand farmers, who of course would have to buy it with funds from the bank, all of which come from overseas, and probably mostly the money comes from China anyway…