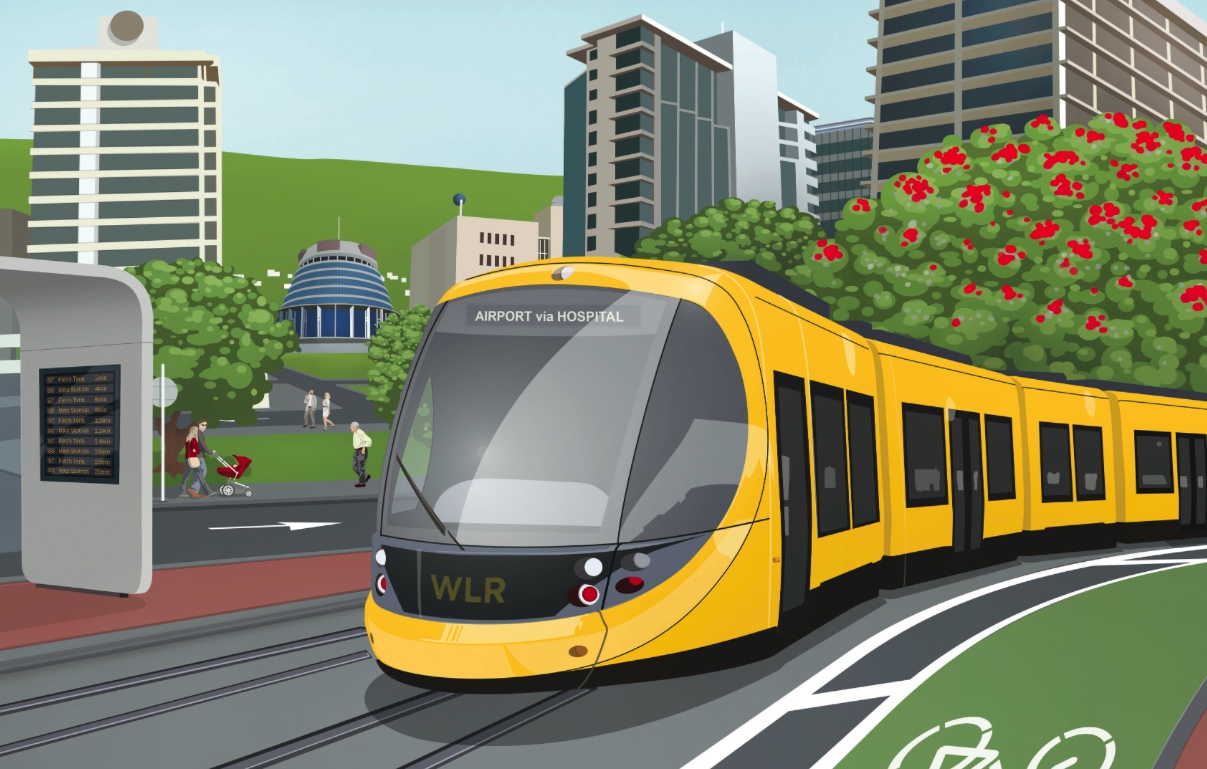 Prescient timing from our last post, saying that I Like to Move It, Move It!! – it appears that our beseechment has been heard, and our prayers are due to be answered. Yes, in a DomPost front page report on Saturday, an article appeared that announced: “Fast-track for light rail to fix congestion“. Young cub reporter Damian George (the Transport reporter) announced that: “Light rail could be approved for Wellington within the next two years as part of an almost $4 billion plan to fix the city’s traffic congestion problems.”

We all know that we are waiting to hear back from LGWM, who are due to announce something, sometime, to someone, this month. This is the first hint that light rail is, actually, being considered even halfway seriously. But sorry – I won’t believe it until I see the first rails go down in the street. The Dominion Post has had a bad habit in the past of being shockingly pro-roading, with former editors being unashamedly in favour of National party pro-road policies. I’m not sure whether Damian George has actually had a genuine scoop on this, or if this is just another case of a “raise your hopes up now, smash them down later” approach from the Dom.

Damian – feel free to contact us on contact @ eye of the fish dot org and let us know in person. Not that the DomPost have ever even acknowledged that we exist, mind you, but perhaps they could start now.

My interest is further piqued by the quote from Transport Minister Phil Twyford, who is reported as having said: “Light rail is being considered as part of this. We will have more to say in coming months.” Damian George then goes on to report that “it is understood a recommended programme of investment, with light rail at the forefront, has been put forward by the working group.” and then: “it is understood that there is adequate funding available from the three agencies to get the project started.”

“The light rail link proposed would operate between Wellington Railway Station and the airport, via Newtown, and could require constructing tunnels under Mount Cook and through Mt Albert.”

We asked last time when we blogged on the subject: “We need Light Rail. We arguably need it now, but we certainly need to start planning it now. What can we, the blog, and the public, do to make it come true?”

First comment back then was from regular Greenwelly:
“The first thing that needs to happen is a route to be selected. There appear to be two camps promoting LR in wellington with one favouring a route along the quays and another on the golden mile. Curing this division would be a good start and a council decision on a route would be a good start…”

Never was a truer word spoken by your fair hands greenwelly (I wonder if this means this person is a member of the Green party? or a Green MP?). There are indeed two camps, each intractably promoting one route over the other. Yes, there are perfectly valid reasons for choosing a route down Lambton Quay (convenience mainly, but that then will result in slowness) as there are also reasons for choosing Jervois Quay (further away form the main mass of people, but they can mostly walk 100m to get to a station, and the Light Rail should be able to go faster). We need to get agreement, in that whatever route is proposed, it must be supported 100% by all sides and without any delaying tactics.

So saying however, the group from FIT Wellington seem to have got a good foot in the door, with this being their proposed line:

That route certainly sounds like “The light rail link proposed would operate between Wellington Railway Station and the airport, via Newtown, and could require constructing tunnels under Mount Cook and through Mt Albert” to me!

Its a long way off the hopes of the pro-Tram lobby, who are still keen to get back to the days when Wellington had a full, coherent tram network:

But we all know that is never going to happen. The hope is, instead, for a prompt start and high quality design process, so that we get Light Rail happening in New Zealand before we all die of old age. I want Light Rail – and I want it Now.