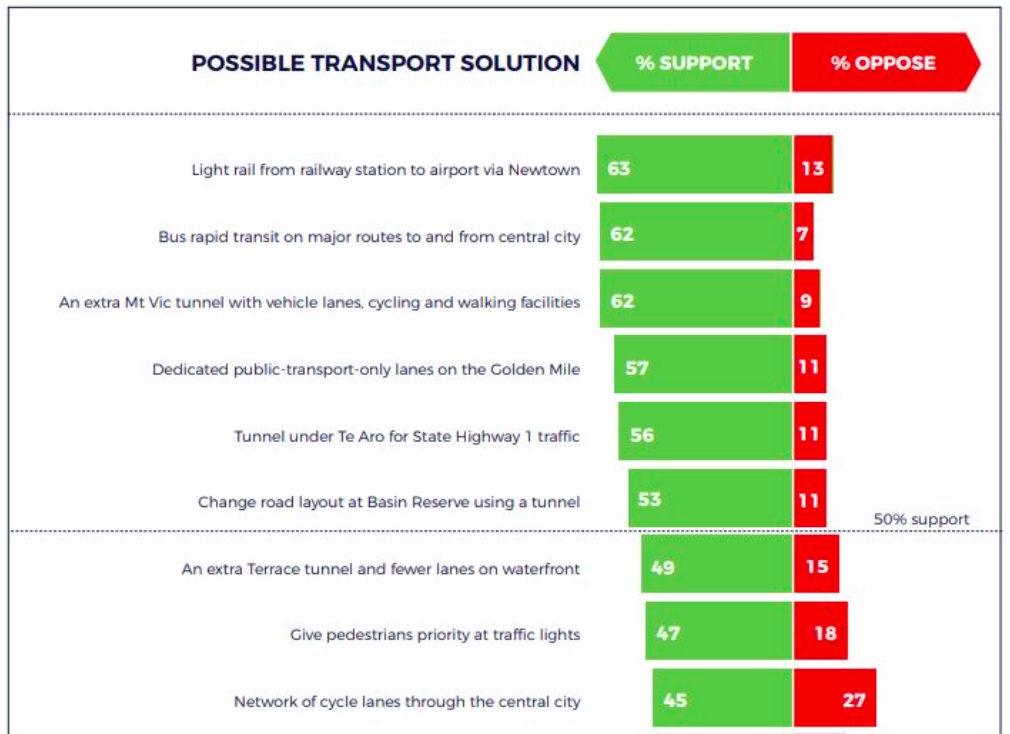 So – what is Lets Get Wellington Moving actually planning to do?

I feel a bit let down that the real discussion on this subject is not taking place on a Wellington blog, but on the Auckland based blog “Greater Auckland” – also cloned onto local “Talk Wellington” but the sad truth is that there are more people discussing it on the Auckland blog.

It’s been over 4 years now since NZTA was sent away from the Basin Bridge Board of Enquiry, and still no action. Something, we are told, is going to be released in October this year – that’s next week baby ! So: hold your breath.

But why is it taking so long? Don’t we already know what people want? The polling that LGWM have been doing indicates that there are some clear preferred options.

Seems to me that there are some very clear leads right there at the top of the graphic wish list: the people of Wellington overwhelmingly want either light rail or bus rapid transit to be implemented, through the city to the hospital and airport, as quickly as possible. They overwhelmingly see that an extra tunnel through Mt Vic is a long-overdue and much needed action, they would prefer that the State Highway is buried underground as it goes through Te Aro, and they totally support faster, better public transport along the Golden Mile.

I’m going to point out that they are wrong – WRONG – to want an extra Terrace Tunnel, as they were not listening to every word at the Basin Bridge Board of Enquiry, which I was, and one thing was very clear from that: don’t duplicate the Terrace Tunnel. John Foster, the designer of the traffic scheme, specifically warned against duplicating the Terrace Tunnel as it would lead to gridlock, letting in too many cars at one time. So, pay attention to him, and: Just. Don’t. Do. It.

At the other end of the scale, there are some other clear things that Wellingtonians do not want. Prime amongst that is: Don’t Want Congestion Charging.

I’m going to go out on a limb here and say that I don’t think the people saying those earlier things are the same people as the people wanting to not be charged for driving. IN fact, I’d say that probably, the results are based on the top results being what Wellingtonians want, while the lowest result is what Kapiti Coasters and Hutt Valley people want.

So – when is it going to come out in public, and am I right?