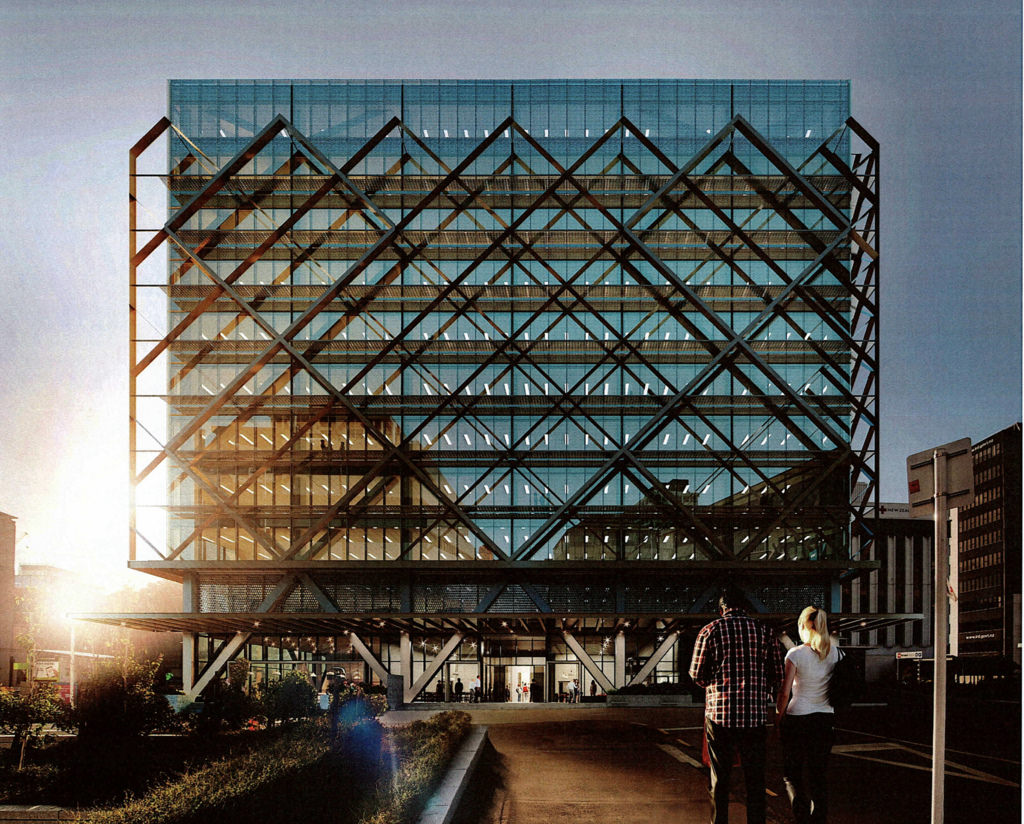 Buildings as in plural, because, dear friends, there are more than one. Let’s start with the announcement in the weekend paper, of a new office block by Studio Pacific, to replace the former ICI house that got demolished after the Kaikoura earthquakes. There is a link to the Stuff article here, but in a truly retarded move, they have cropped the picture so you can’t see the top of it. I mean – who crops a picture online? It’s not like there is a shortage of newsprint in a virtual world! And they’ve chopped off the top, which is a lovely feature. Shame on you DomPost.

The building appears, from this one glimpse, to be quite debonair. Suave, smooth, elegant – spikey too, in the haircut we can’t yet see. In line with my predictions of all future office buildings in Wellington going to be built to a more indestructible standard, it is proposed to be Base Isolated, which makes perfect sense (seeing as the previous building found the site excessively shakey). It has a structural exoskeleton – a diagrid – although unlike the last work from Studio Pacific, where the diagram is hidden below the surface, this one is hidden in plain sight: it proudly wraps the outside of the building. By the looks of the render, it projects out off the building envelope by a couple of feet or more. I’m not sure why they have changed the system from the previous very successful diagrid on the new Deloitte building, but there is one immediate, obvious answer: money.

It’s a lot simpler this way, and the building can stay stiff, while the cladding will be costing just the price of rectangular glazing, rather than the excessive cost of triangular panels. Although not stated anywhere in the article, I’m presuming that the Engineer might well be Dunning Thornton Consultants, as they were the engineer on 20 Customhouse Quay as well, and so they’re the reigning knowledge base on external diagrids in Wellington. The building does, however, have a very different appearance. Here’s the better, full version.

I’m liking the thin black steel beams and columns, with the reflections against the glass showing a deep shadow effect. I think that we can just make out some vertical columns in behind the glass, with a more normal, less frenetic grid than the previous building on Customhouse Quay. It is also proportionally more like the ICI House building here on this site before. Overall, looking good. Is it a bigger building than before? I can only presume so. Are Prime Properties all ready and willing to build it? Again – one can only presume so. Starting in 2019 ? Hell yeah! Let’s do this ! Let’s collectively, slowly, rebuild our city to be highly earthquake resistant.

Coming soon – more new office buildings! – Tennent & Brown – again, a terrible picture in the Dom – do you want to send me through a better picture, ready for the next post ?
Post-script: thanks for the links Tom and Seamonkey