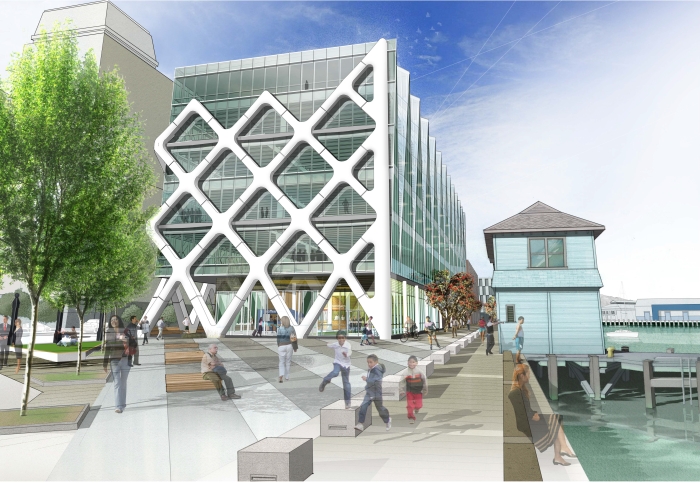 I’ve been quiet about this new proposed building because Scoop, Stuff, and the Arch Centre appeared to be taking a lead on discussing it – but discussion seems to have died down already. Public submissions close on March 9 – ie Friday, but this is the submission period before a more formal Resource Consent application.

This is the most important new building on the horizon – well, OK, given the current parlous state of the construction industry in Wellington, just about the only new building on the horizon, but you know what I mean. It’s a controversial site – the rabid grannies at Waterfront Watch appear to think it is the end of the world, because it blocks views when you’re driving along the waterfront, but if the public doesn’t really care too much, perhaps they are fretting over nothing. Waterfront Watch certainly do have a good role to play – their point of view that there should be NO buildings on the waterfront is controversial, but their championing of the anti Variation 11 clause is a really interesting battle, and one I agree with: buildings on the Waterfront should be publicly notified, rather than just given approval by some faceless body behind closed doors. This site really does belong to all of Wellington, and so all of Wellington should have their say.

I’d just like to take a look back at the previous proposals for this site – way back in 2007 there was a competition for the sites 8, 9, and 10. In what I thought was a pretty odd decision by the judges, all three sites were won by Athfield Architects – we blogged about it here. The Athfield building for Site 10 looked like this from a similar angle to the image above:

So we can see from that picture that the building footprint has retracted quite a bit, and no longer reaches like a giant finger into the waters of the harbour. In that Athfield picture the old Eastbourne Ferry building seems to have been wiped from the face of the earth, but we can see from this other picture of Ath’s that it was just nestling in the undercroft:

By comparison, the building from Studio Pacific (with structural engineering from Dunning Thornton) will look like this from a similar angle:

It’s a very different building – it’s far more interesting in many ways than the previous boxy number (although without the giant finger / toe dipping into the harbour) – and the involvement of the engineers has been presumably more to the forefront on this building, with the big exo-skeleton wrapping around 3 sides of the proposed new crinkly box. That’s the bit that most people seem to be concentrating on discussing – does it look sexy? does it look boring or bland? has it been done before? can it be done here? why is it being done on 3 sides not 4? Comments on Stuff seem to be running both for and against it:

AND #33 01:59 pm Feb 08 2012 “Hide that ugly NZ Post building I say! It’s so hideous – from all angles. This part of the waterfront is an ugly barren concrete jungle and the sooner something is done to it the better for Wellington & all of us. Seriously, when is the last time anyone actually went to this specific part of the waterfront and spent some time there & enjoyed it!? Good on the developers for beautifying the area and making a large portion of it a great, weatherproof and interactive public space, & a more welcoming one for cruise ship passengers.”

fmacskasy.wordpress.com #42 08:50 pm Feb 08 2012 “Building high rise office blocks, on reclaimed land, right by the shoreline. Oh how bloody clever is that? I wonder who the poor buggers will be who will be working in that death-trap with the Big One hits Wellington? And who will take responsibility for building that disaster-waiting-to-happen? Silly question; no one will. To the powers that be; this is not a good idea. This will end badly.”

Yevan #10 09:22 am Feb 08 2012 “Watch as millions are spent on the monument to greed and wealth, while the %1 tell everyone there is no money and wages have to be cut. The government are preaching to people that they better do without in order to save for their retirement, so what is the deal with this? What use has Wellington of another monument to the wealth and greed of the filthy few, Wellington is a city that belongs to the people which belongs to everyone. These people have the technology to work from anywhere; we do not need this hangover from the industrial age that constantly reminds us of the inequity in our society. The people of wellington need to light it up for once, enough is enough.”

Comments on Scoop are more typically against it (it is run by Lindsay Shelton, a former head of Waterfront Watch, after all, so many of his followers will be posting there), although at least Jitterati adds some much needed humour:

Sigurd Magnusson, 8. February 2012, 21:31 “Where will the motor homes be located now? I walk past the carpark each day and notice a fair quantity of use by tourists.”

Elaine Hampton, 10. February 2012, 21:38 “You know â€“ just because we have the coolest little capital in the world (and speculators want a piece of the action) doesnâ€™t mean it canâ€™t be ruined by another UGLY building. And whatever the debonaire mock ups look like, the real thing is nothing like it. This is awful â€“ the Waka was bad but this is just appalling. Who was it said it was just a piece of â€˜waste landâ€™? I think these inner city camp sites / open spaces are what give Wellington its human scale. The waterfront land was donated to the city, and should remain open space for residents and visitors, not leased to speculators at effectively peppercorn rents. Tthere are already too many buildings on the waterfront. Some people do not think we are a city unless we look like a mini New York, never mind how hard it is to live in for most people. We may be the 99% but the 1% appear to have the law bent to their benefit.”

Most of these comments just talk about the outside of the building, or the blocking of the views. But to me there is something even more important to discuss – the inside:

This internal space has been designated as ‘Public Space’ and is proposed to be a non-corporate space, just for Wellingtonians to hang out in. It is described as “a generous public winter garden / indoor plaza on the ground floor which is seamlessly stitched into the waterfront promenade and public spaces via sheltered colonnades and walkways.” How does that work exactly? How does that work for you? I’m interested to know.