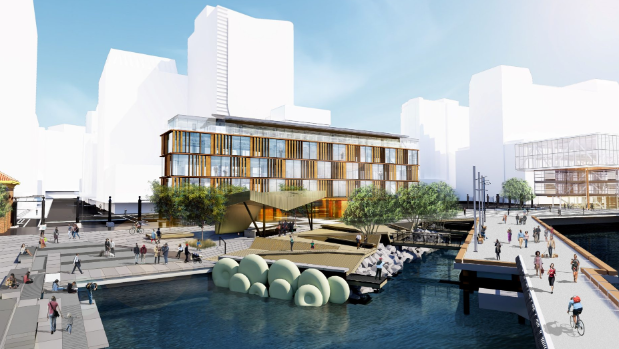 In the world’s slowest playing and longest lasting saga, what could be the final chapter has been announced. A new building – the last new building? – for the Wellington waterfront. The Dominion Post of course rushes straight to get an opinion from the bunch of wild rebels that were probably teenagers when this controversy started: the aged and creaky-jointed citizens who appointed themselves to rule the waterfront, “Waterfront Watch”.

At first glance this looks like a checkerboard box made of timber, with half the facade covered by glass and the other half by timber panels. Perhaps that is because it is unsure exactly what it may end up being used for. The newspaper reports that Willis Bond will be the developer, and it could be offices, or a small hotel, or apartments. Council will be discussing the sale of this land to the developer on Thursday – behind closed doors.

From further up the wharf, perhaps if you were to be looking from the old ferry building, it nestles into the landscape like this above, but when the rendering camera from Athfield Architects has been helpfully skewed to look back from site 10, the appearance changes to this:

So we can see that there is a second layer of building behind, a thin glass sliver behind the kindling of timber on the facade. It’s a nice looking building – certainly more appealing than the shocker we’re ending up with at site 10 – with an underground carpark and a ground floor for public use, whatever that might be.

The thing about Waterfront Watch is that they believe they have some god-given right to speak out and stick a walking stick into the spokes of any development on the waterfront, but all they seem to achieve is worse results. Yes, they were marvellous back in the day when some idiots at the Council proposed building over the entire waterfront, but since then they have kept on going. Their involvement in protesting about the building at site 10 (currently slowly under construction) meant that the top floor (which was to have been a public viewing space) was lost, so the building is now one floor less but Wellington is irreplaceably worse off. So too was the ground floor of site 10 – boringly now called the PWC centre, because what more could bring live and vitality to Wellington but a bunch of accountants taking prime position on the waterfront? The ground floor was also going to have a large public space – but after Waterfront Watch’s rantings against the building, that too has been lost. Now we have nothing. Thanks a lot.

What we do have, however, is a photo of the development as it stands today. Digging out of the land at site 8 has commenced, with a landscaped area by Isthmus I believe, and the tiny skinny site of site 9 has also started to be fenced off as well. Your comments are welcome.