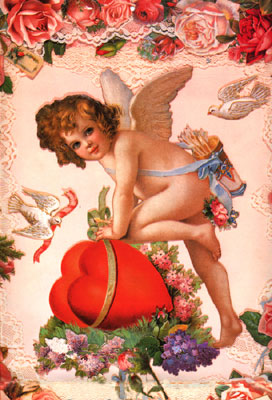 Just for you, because it is a special day….

Of course, the truth is never quite as sugary as the intoxicatingly sweet dish served up by our modern media moguls. While we’re invidiously indoctrinated to think of Valentines Day as a sweet and dreamy lovey-dovey Hallmark moment of sycophantic night-time murmurings, best trotted out (a minimum of) once a year, in truth VALENTINE “was a holy priest in Rome, who, with St Marius and his family, assisted the martyrs in the persecution under Claudius II. He was apprehended, and sent by emperor to the prefect of Rome, who, on finding all his promises to make him renounce his faith ineffectual, commanded him be beaten with clubs, and afterward to be beheaded, which was executed on the 14th of February, about the year 270.”

Above: as he was then, and below: as he is now, apparently, his “relics” in a crystal box.

The truth, as always, is more interesting than the fiction put out by the corporate card companies. Valentine is not quite the cupid we are driven to believe. Looking at where St Valentine is now buried, we find that “Pope Julius is said to have built a church near Ponte Mole to his memory, which for a long time gave name to the gate, now called Porta del Popolo, formerly Porta Valentini.”

(Giuseppe Vasi, Le Porte e le Mura di Roma – 1747)
The gate is standing, still, in Rome, and used in an everyday manner the way those Romans do. So what happened to his body? Well:
“The greatest part of his relics reside now in the church of St. Praxedes. To abolish the heathen’s lewd superstitious custom of boys drawing the names of girls, in honor of their goddess Februata Juno, on the 15th of this month, several zealous pastors substituted the names of Saints in billets given on this day.” And what a great church that is – simply gorgeous piece of over the top gilded byzantine celebration, with St Valentine residing in his tiny coffin somewhere in the crypt of St Praxedis, who had a habit of looking after murdered Christians:

I’ll bet that by now, if you’re still reading, you’ll be asking just who St Praxedis was – certainly not as well-known as St Valentine. Well, the story goes that St Praxedis was: “a 2nd-century daughter of a disciple of St Paul living in Rome, and sister of St. Pudentiana. When the Emperor Marcus Antoninus was hunting down Christians, St. Praxedis sought them out to relieve them with money, care and comfort. Some she hid in her house, others she encouraged to keep firm in the faith. She likewise cared for the severed bodies of those martyred for their faith. St. Praxedis was at first venerated as a martyr in connection with the Ecclesia Pudentiana, but afterwards a separate church was built in her honor, on the alleged site of her house, to which, when it was rebuilt by Pope St. Paschal I (the present Santa Prassede), her relics were taken.” And so here she is, in a painting by Vermeer, mopping up the blood of dead and dying Christians who were, apparently, beheaded in front of her:

Nothing to do with urbanism in Wellington of course, but the urban link comes in with the more modern massacre by Al Capone, which we have all heard of – the Valentines Day Massacre, where numerous bodies were found in 1929, machine gunned to death in a warehouse in Chicago.

Things as they were then, it caused quite a stir back in the day, as the crowd gathered round and gazed in horror…

Newspapers ran VERY LARGE HEADLINES – the sort of thing we reserve nowadays for Harvey Norman 48-month No Interest deals on new whiteware (show your spouse how great your love is – buy a vacuum cleaner!), but back then it meant that something really BIG had happened:

Which reminds me, in a roundabout way, of our recently departed dictator Mubarak, and his solution to a previous problem with islamic fundamentalist terrorists. These fundamentalists brutally massacred 62 people (including 58 foreign tourists) in 1997 at an Egypt must-see tourist spot, the temple of Queen Hatshetsup. The terrorists then allegedly all killed themselves.

Knowing what such bad publicity would do for tourism, the country’s only real source of income, Mubarak took some extreme measures. Although up to then Mubarak had been very careful not to be too harsh on the Muslim hardliners, the murdering of tourists en masse was clearly a step too far. Never a man for dithering around with talking when action would do instead, Mubarak’s regime rounded up a fair bunch of Muslim extremists (over 50 of them, from memory) and after a short show trial, had them all machine-gunned to death in a show of strength. Tourism recovered quite well after that.

Which shows just how tight a grip he had over the country for the last 30 years. With Mubarak gone, who knows what will happen in Egypt. Certainly not instant democracy and happiness and light – more likely to be a nasty islamic uprising and implementation of sharia law, rather than anything democratic.

In any case, its off my holiday vacation list for the next week while – and the lack of tourism all round is bound to have a bad effect on the Egyptians, and then who knows what they will be walking like. As a comparison, our possible non-hobbit filming caused doom and gloom in the whole country – imagine what our country would be like if all the tourists decided to stop coming here? Well, probably a fair few less camper-van accidents, that’s for sure, but otherwise, we’d be a sad and lonely little place.

So, after that whirlwind tour through history, it’s back to reality, and a charming farewell greeting card from me: