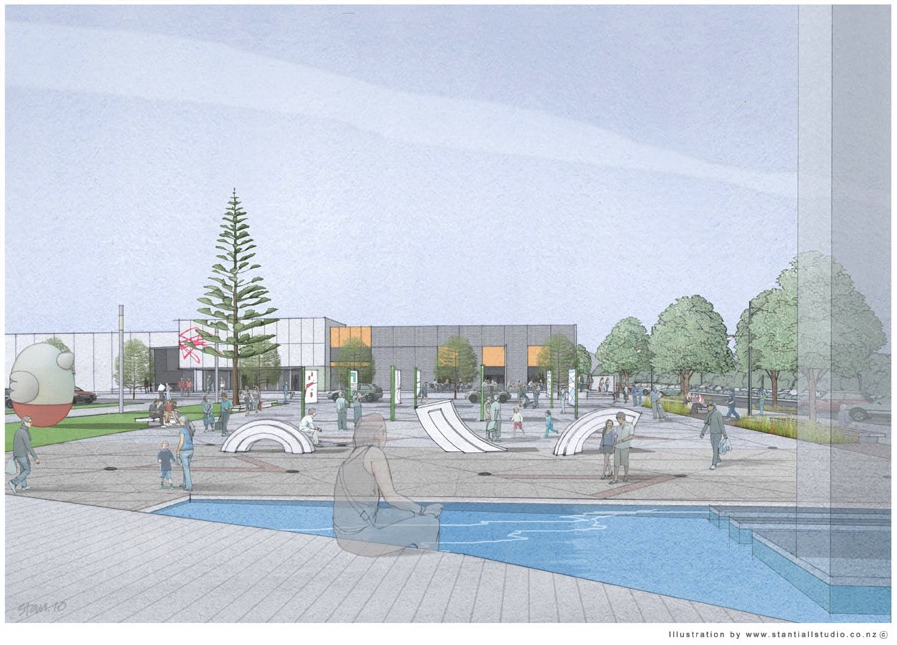 Slight change from Wellington – how about we look at the Hutt for a change?

And yes, the Hutt is due for a change. Tenders are open for Lower Huttâ€™s new Square, which starts to make sense of the jumbled mess of parking that is currently outside the New Dowse. Design of “The Square” is of course by Athfield Architects, who did such a great job with the rebuild of the Dowse itself. It will be a “space for outdoor events, sculpture, exhibitions and leisure activities.” And it is proposed to look like this:

We were sent this from WCC’s friendly PR person – thanks Richard – I presume this went out to the DomPost as well, but as far as I can see they never ran it – which is a pity, as it deserves a wider audience than this modest (but highly influential) blog can do (modest cough).

The Square is all part of the Hutt’s “CBD 2030 Vision” which Hutt City Council Chief Executive, Tony Stallinger is really proud of – and who sees “The Square becoming the cultural heart of the city due to its proximity to the various civic buildings and The Dowse Art Museum. New car park spaces will be created first and, after Winter next year, stage two will see construction of the final elements, including a water feature that taps in to the valleyâ€™s natural artesian water supply and a large digital screen.”

We all know that the Hutt’s public spaces are currently a disaster zone – a model of flawed fifties urban motorway planning, colliding with a staunchly non-heritage viewpoint from several of the Councillors in the past, and one of the worst wandering ring-road designs outside of the Bull Ring in Birmingham – so it is way overdue for a decent tune-up. The current precinct around Hutt’s collection of groovy 50s buildings (such as the Horticultural Hall) is beset by a cross road and there is little enclosing of public space with an almost suburban layout to their public buildings : surrounded by grass or surrounded by tarmac, either way they feel marooned and abandoned.

There is no doubt that the area concerned is crying out for a different scheme to what is there at present – although, I’m not entirely sure that this scheme is the answer to everything, but it does go a fair way. It attempts to anchor the ugly little Visitors Centre into the overall vision with a nearby pool, which looks across a proposed urban plaza to the New Dowse beyond. There is a fairly large space of public “Square” which is the home for “Art” and “Sculpture”, but also, sadly, home at least for a few cars as well, if these pics by Stantiall are anything to go by. The PR release says:

â€œAthfield Architects have responded to the communityâ€™s call for a space that everyone can enjoy both day and night and have drawn inspiration from their successful design of Waitangi Park in Wellington. Weâ€™ve put a lot of energy in to developing a multi-use space with extensive input from the community and almost every team in council.â€

Hmmmm. Day and Night? I’m not at all convinced that this will work as a public space, or that any parallels can / should be drawn with Waitangi Park in Wellington (one of my favourites, and phenomenally successful as a multi-use public place). Waitangi Park works because Wellington is an intensely urban environment, and it is a welcome green release from all that grey. But this “Square” is doing the opposite, tricky, and almost impossible task of trying to be an Urban Square in an otherwise almost park-like setting. As a place to go, to hang out, with friendly interactions with people passing by, it is missing a number of the really important parts of any urban composition.

But what would I know – after all, Fish don’t even have legs to walk around the inner-city on. So let’s look instead at what others have to say. Jan Gehl, of course, has published widely – always worth a read. His latest book, Cities for People, is a really useful resource for those interested in urban planning. There’s also the Grand Urban Rules book I reviewed a while back, with several slightly sardonic rules of engagement with the urban fabric. In matters on-line, there is an organisation in the USA called the Project for Public Spaces, or PPS.org, which has published / blogged quite widely about these factors. In an article titled What Makes a Successful Place, it notes:
“Great public spaces are where celebrations are held, social and economic exchanges take place, friends run into each other, and cultures mix. They are the â€œfront porchesâ€ of our public institutions â€“ libraries, field houses, neighborhood schools â€“ where we interact with each other and government. When the spaces work well, they serve as a stage for our public lives.

What makes some places succeed while others fail?”

“In evaluating thousands of public spaces around the world, PPS has found that successful ones have four key qualities:
â€¢ they are accessible;
â€¢ people are engaged in activities there;
â€¢ the space is comfortable and has a good image; and finally,
â€¢ it is a sociable place: one where people meet each other and take people when they come to visit.

PPS developed The Place Diagram as a tool to help people in judging any place, good or bad:”

So: hate to rain on your freshly concreted parade, but this scheme does seem to break some of the important rules on successful urban place design. Things like:
â€¢ Being on a pedestrian walkway – from one place, to another – having a continuing flow of pedestrians past the door.
â€¢ Enclosed space – somewhere for people to sit with their backs against a warm sunny wall, occupying the periphery of the space.
â€¢ Overlooked space – not crowded by blank walls, that encourage vandalism and graffiti, but having people living and working nearby that give a sense of ownership to the space.

But I’m hopeful that this space can prove me wrong.