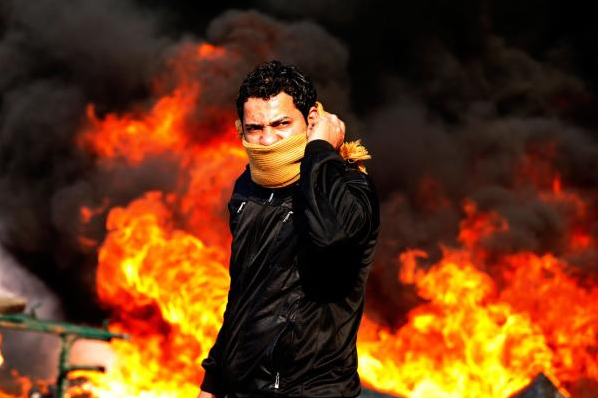 We were going to call this post “Cairo Knife Fight” but there is a band going by that name already – prescient marketing, I would have thought, given the current political turmoil. Instead, the current title refers to the immense ripping off that Mubarek has done to the people of Egypt. News yesterday reports that he and his family have amassed a fortune of $40 billion – which explains directly the reason why the rest of Egypt has to get by on $2 a day. Shocking – no wonder that there is a strong move against him. Gone by lunchtime? Gone by Friday!

It is times like this that I remind myself how lucky we are to live in Aotearoa, where even if our leader is filthy rich, at least he hasn’t got there by ripping us all off, and he doesn’t shut down the internet, or fail to go when the hint is given so strongly, as in Cairo at the moment. There’s a pretty strong hint being given right now in Tahrir Square, with a whole lot of angry muslim youths. Word has it that the Coptic Christians in Cairo are staying inside, not too happy at the thought of a rampant muslim mob.

It got me thinking – Sleeping Dogs aside – how we would perform in an uprising here in New Zealand? We don’t have the equivalent in NZ of the giant urban squares that Cairo has, nor do we have the massive avenues that Hausmann carved through Paris. There was a time when students would get upset over things like apartheid and inequality, and their marches would fill Lambton Quay and echo up and down the urban canyon. But no more – with current fee levels at record highs, and Gen Y in full flight in NZ, there is little sign of unrest aside from Density Church’s black clad anti-gay march from a few years back, or the bikoi of bikers protesting at their ACC fees. We just don’t get upset – we just get complacent, even when things are falling apart: our lethargic population instead sits back and watches more commercials for Harvey Norman, while waiting for the next Masterchef / Gordon Ramsay / Kitchen Confidential series to start.

We don’t even have an airforce capable of flying threatening forays over our cities – indeed, we don’t really have any airforce at all. Does 2x Boeing 757s and a handful of 50 year old cargo planes constitute an airforce? Not really – if any – and nor do we have much of a Navy, despite our massive sea reserves to guard from sneaky squid fishermen: just 2 frigates and a handful of speedy tugs.

What we have instead is an economy gradually drifting to a slow death, not saving enough, apparently, to which we can no doubt blame our booming numbers of coffee houses frittering away our hard earned cash. Despite Nick in the NZX (Odlins) building having his viewshaft blocked by an inconsiderate wharewaka, our stock exchange itself is moribund – it has lost the will to live. If the Australian and the Singapore stock exchanges do merge, as is picked, our NZ exchange is totally doomed to even more insignificance, and will undoubtably have to sell out to somewhere else as well. I find that interesting – time was when we had a thriving stock market, with prices being chalked up on the boards and bidding frantic with sweaty fat men with worried hands flapping up and down. Now, instead, we have just a few computer screens, and little movement on the books. My proposal for a solution: sell the NZX to Trademe (they’d only have to move a floor or two up or down), where the real action in NZ trading is taking place.

In New Zealand, our former Auckland exchange is now hidden in behind nondescript Queen St clothes stores, and has been converted into a travel agent. In Wellington, although we have a Kerry-ticker-tape sign ticking by the windows, our NZX is bland and anonymous architecture, hiding behind the badly renovated bulk of a former timber store, taking up (and wasting?) valuable harbour frontage. What happened?

Stock exchanges were once the place where things happened – the history of our world architecture is told by the history of the exchanges themselves. There’s the Royal Exchange, setting the neo-classical scene for a whole corner of the city of London, and similar buildings in other industrial cities like Manchester and Liverpool, all now re-used for different purposes, like cafes, or places for genteel exhibitions.

There’s the fantastic brick expanse of Berlage’s bourse in Amsterdam, which was built at the peak of the Netherlands influence on world trade, and is now an architectural centre grand enough to make the rest of the world jealous.

Even in ancient times, the exchange was the place where business happened, and the buildings were normally substantial enough to reflect that – like the grain silos used in the Star Wars films to stand in for the outbacks of Tattooine.

Bringing us back to Tunisia, where the current contagious uprising all began. Standing for hundreds, if not thousands of years, the architecture survives, even if the regime does not. Let’s hope that Egypt’s wonderful architecture and museum survives unscathed by the current unrest, and remains available for all the world to go see and visit.