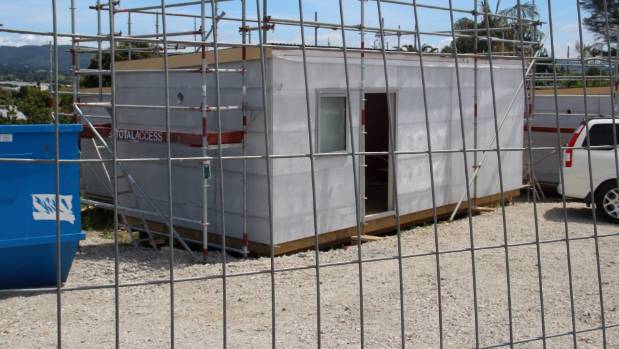 Now this is a story that should concern us all, as architects, as human beings, as Aotearoans. And also as consumers of our abysmal media… Here is the link to the article on Stuff – from the Auckland “Western Leader”. Bad choice for a title right there – I believe Trump also calls himself a Western Leader as well, or was that Great Leader? Hmmmm…..

Whatever – first up there is the design of these “emergency transitional housing units” which do indeed look like prison cells from the outside. Secondly there is the matter of size – at 28m2 each, these don’t even comply with Auckland’s own rules of a minimum of 40m2 per housing unit. Thirdly, the article blandly attributes them to “the Government” when in fact they are nothing at all to do with the current Government, and all to do with the Housing NZ organisation, under the previous Government.

“New “prison cell” emergency housing units are being built in Auckland. Not much bigger than a single garage, the emergency housing units in West Auckland are part of the Government’s latest solution for the housing crisis. Single people would live in the 28 square metre prefabricated dwellings, for an average of three months, under the Government’s transitional housing programme.”

My apologies for the poor quality of the photos – but these are the actual photos as posted by the great Western – shitty subject matter to be sure, but these are some of the worst holiday snaps I’ve ever seen from the media – it is as if the “photojournalists” just stuck their phone over the fence and snapped off some blurry pix. Wait – actually, that’s what I do, and even I get better pictures than that. Try harder!

Aside from questions about “what are they actually made of?” which I’d be keen to know (looks like five planks of hardies on the outside?), with a flattish, slightly sloping roof (so they can’t be stacked), minimal windows so no-one can see in (or out, either), there is of course the matter of the design – or should I say – the lack of it. I mean, these certainly look pretty crap – there could be a brilliant design lurking inside, but I doubt it. But how low can you go? Is there no depth that the people at HNZ will not go, when it comes to lack of design input? This is…. a new low.