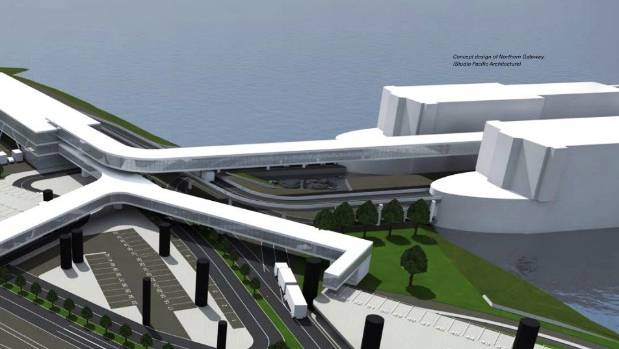 This story has me intrigued. Here we are in the middle of the silly season, when the proper journalists have gone on summer holiday and all that is operating the presses is the janitor locked in the bathroom cupboard, and the DomPost comes out with a cracker of a front page article like this.

This is a massive story, really, a big day for Wellington, and yet here it is when we’re all still on holiday and no one is paying attention to anything. Although the pictures supplied by Stuff just say “Centreport”, it doesn’t mention the design team. Eagle-eyed viewers will note however that there are Studio Pacific Architecture tags on the renders, although I’m picking there will be an engineer in the mix as well, and possibly even a contractor advising too. I mean – how do you even build a floating drawbridge, in the ocean, on a fault line, with the tides, and the waves, etc etc. Some tricky problems there!

To be perfectly honest, I’m not even sure what I’m looking at in these pics. I presume that the white boated-looking things are in fact boats, not part of the terminal itself (Boatey McBoatFloat), but I could be wrong. The long white snake-like ramps are presumably only for foot passengers, and seem to be there to safely cross over the miles of truck lanes and car traffic that builds up here. Then we spy what looks like a nice new green waterfront park, near the current decrepit passenger terminal – and a new two-story glazed box that could perhaps be a new passenger terminal?

The Stuff article also had one of their absolutely pointless videos, which do nothing more than do a slight pan on the two photos, with some tinkly music, for the vapid idiots who don’t have the attention span to actually read a newspaper article. Clearly the whole thing has been taken straight from Centreport’s 2017 annual report, which doesn’t really say much about the scheme either. It’s all work in progress. Nothing is decided. There is a steering group, apparently, but no one is saying what their brief is. General man with an opinion on everything, John Milford, says: “This is an opportunity to reassess the whole port/harbour layout. Out of adversity comes opportunities, and I think that’s what we should grasp.”

But are they, in fact, reassessing the whole harbour layout? Clearly, from this picture, they are not. The terminal appears to be in exactly the same place, bang smack on the main Wellington fault line, complete with the same stark dangers as we have always had: that in the event of a massive Wellington quake, the ferry terminal would be out of action, perhaps for months. Certainly in the Kaikoura quake, where CentrePort land and buildings were hit very hard indeed, the ferry docking facilities were knocked out of action, apparently caused by one of the ferries taking off out to sea without disengaging the connecting ramp properly, and wrenching it off / making it fall into the sea. Did I get that right?

The issue, presumably, is the rail tracks that align our one remaining rail ferry with the lines on land. Cars and trucks can just have a nice big flat sliding plate which they can drive over, but a railway bogie needs some pretty accurate track aligning and that needs a rigid connection. Difficult with the wind blowing you sideways, and the tides pushing you along, and waves making you go up and down, but when you have to allow for seismic action as well…! There’s not a lot of room to play with there either, with a 6-lane motorway flying past, and the main connection routes for the water supply, sewerage, etc through there as well. But despite all that, somehow they are managing to talk to BlueBridge and get them on board (with the idea) as well. So – who is going to be paying for this? You and me? Or them?

“….the terminal proposal had received positive feedback from CentrePort partners and stakeholders. No timeframes had been set for the project, and it was not known how much it might cost or who would pay for it.”

Going up and coming down