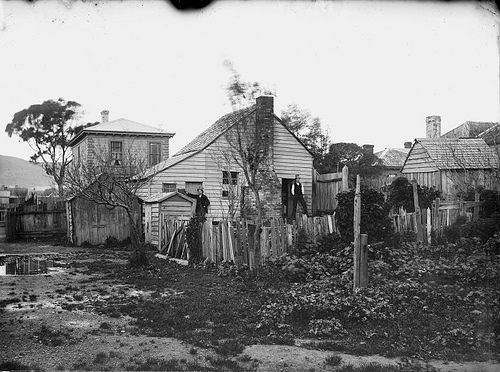 The Tip Top icecream adverts of previous years have not survived through to this summer, a great pity as their useful tips for modern living had a excellent mellifluous effect on the general populace. My favourite being the man in speedos, walking away from the beach – if you’re more than a block from or can’t see the sea, then no matter how good the quality of the togs – they become mere undies in people’s eyes. So here it is for you, in case, like me, you’re missing it:

In Wellington, of course, there’s really only one man we allow to loll round on the pavement in his undies.

But barring Ben Hana, the beach is one of the few places in the city we allow ourselves to be in a state of undress. The rest of the population retains the tendency to cover strategic parts of themselves with brightly coloured scraps of carefully placed fabric, and expose the remainder in a state of worshipful supplication to the sun gods, or just fry themselves under the great UV lamp in the sky. And no doubt, very soon, we’ll all be off there too.

There is a whole raft of things that have come up in the last few weeks to blog about, to discuss, but really: at this time of the year everything begins to wind down, and the Fish tends to slink off and, well, go Fishing. We could be reporting on tax moves, or the twist to the tale of the Dom reports on moves of a possible Casino being planned by persons unknown for the former Defense Force site at Shelley Bay, or the fantastic news as reported here in the Dom, that NZTA have finally put the houses in Tonks Ave / Upper Cuba St / Inner City Bypass on the market at last – thank goodness, and about bloody time too.

“The houses in the area between Upper Cuba and Willis streets have been empty for more than three years after the Transport Agency moved them at a cost of $3 million to build a $40m inner-city bypass. They have not been offered for sale until now because the agency needed to offer them to former owners first.”

Hmm, not really a story there yet, is there? Let’s wait a while before we get into that. It’s a forlorn hope that the Anarchist bookshop might be back in there, but actually, a decent bookshop of some sort in Upper Cuba would be good. Maybe with just a little Arnarchist section where they could go and compare piercings. On other stories, yet again, local media jumps at the cost of something, without looking at the value. The Waka House should be a great addition to the waterfront, and we’re not as racist as the Dom to grumble at the miniscule cost. We’ve got remnants of Waka landing areas all over Wellington – and not a Waka to be seen. Personally, I’m looking forward to the opening already. But perhaps that’s enough for the year. Ever wondered what Carrie Fisher did when Jabba didn’t want to play?

In case you’re a new visitor to Eye of the Fish, and are looking for some of the particular posts on certain subjects, here’s a quick summary of some links that you can click on and take you straight there, to have a read. It’s free of charge – we’re like Borders, but without the bad coffee, or hopefully more like Unity Books but without the helpful staff. To be as useful as we can, here are a bunch of the best bits from over the last year or so. An area where you can go and not have to discuss global warming.

We can’t really go on holiday yet, without thanking our friends and sponsors and fellow bloggers. So biggie Ups to the fantastic folk at the Wellingtonista, with their non-stop enthusiasm for blogging, partying and drinking, normally all at the same time. Also great to have some other urban bloggers in Wellington, so thanks again to the Architectural Centre, who I am most impressed at having found some pictures of an ancient proposal to cross the Basin Reserve – underground. And also a link to the Bldg Blog which is just fantastic – and unlike us, is a full time occupation and a world-wide phenomenom, as well as a damn good book. One day, maybe, one day.

Please do feel free to add your comment on any of the subjects – you can still have your say if you wish, as long as you don’t try to sell me any Viagra. We generally catch and biff all the spam – incidentally, we’ve now posted 205 posts and had 2,971 comments, along with 11,779 spam, over the last 2 years. In the mean time, happy Christmas, and read on:

What about a giant sign saying Wellywood to go with the new proposed Jackson Museum?

How big or small should a house size really be? Some cities have done the math… And what about our Council housing? Should we be making more use of Containers as housing, for people or prisons?

Proposals for and against the Maranui Cafe, discussed a few times…

Our first purpose built Supreme Court, and why it looks like a poached egg instead of a national Icon…

The promoters of a massive Mall in Johnsonville have got their way – is Johnsonville Mall really a good idea, or is there no way except the highway? What about some discussion on tunnels instead? Or on a discussion of Big Boxes in Rongotai….

Speaking of Massive, there’s an ugly great elephant in town that no one is talking about, except us

Discussing the proposals for the National Library, which have since been canned. Apparently, the stuff on the outside wasn’t really necessary to do after all…

Looking at public toilets, around the world, mostly of the standing up Pissoir type…

Debating the proposed Flyover at the Basin Reserve

Musing on what makes Cuba Street just soooo good, and Black Magic in Auckland, while wondering whether we should build more underground in Wellington

New apartment buildings like the Monument and the Piermont blocks, and the Tetris-like assembly of an awfully cramped development. Quite a few articles about crappy development, of which this is one

Creepy blokes taking the piss out of architects

A new Community Centre for Newlands, that has sprung up from nowhere

Yet another proposed giant supermarket for Wellington, this one stuck right on the Basin Reserve and crippling an already chronic traffic system. Does that mean that the supermarket is just another reason to have a Flyover?

Why don’t we have an Inhabited Bridge in this great little city of ours? And should that connect into the Memorial Parkway?

A newsflash that appeared to fool some people, who didn’t check the date

The giant Fish Hook of Maui sculpture, which has now been canned – forever?

Squiggly wildstyle graffiti on our walls – why don’t we have an artist like Banksy?

And some more, older ones, from the year before:
Beauty, Snapper, Banal architecture, Transmission Gully, Airport traffic planning, Courtenay Park, small apartments, affordable apartments, and just so much more