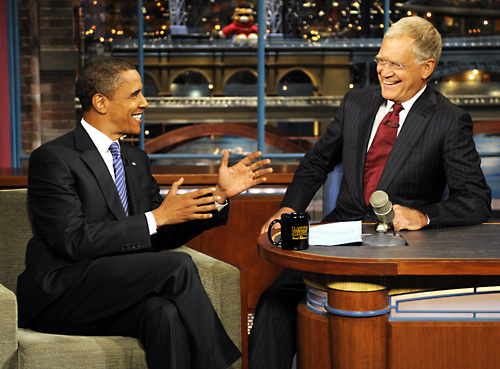 Love him or hate him, David Letterman is, in New Zealand, the King of late night Television (most nights, Prime TV, around 11.30pm in NZ). We have no home grown equivalent – we don’t receive Johnny Carson’s successor Jay Leno on terrestrial TV, nor do we get that sarcastic bloke Jon whatsisface. I dread to think what NZ ‘celebrity’ we would have as interviewer – god forbid we have Paul Holmes, shithead Paul Henry, or some such – and a non-stop stream of Z-grade celebs from Shortland Street as our steady guest fodder. No, better that we get the gentle irony of Letterman, and a non-stop stream of generally quite famous guests on the show. Although, of course, if we had it home-grown in NZ, we could have embarrassing appearances by John Key almost every night. Oh joy, oh bliss.

Let’s stick with New York in the mean time, not just for the lineup of American celebrity, and certainly not for the banal repetitions of the brainless and hairless head of music, Paul Schaffer, but most of all for the way that the Letterman Show uses the streets of New York as it’s backdrop. That, for me, is the best thing about the show – the semi-urban nature of the parodies – at times they have blocked off the street outside the Ed Sullivan Theatre (where the Beatles debued in America) and played basketball, baseball, hurled pumpkins, shot things from a cannon (or was that my imagination?), chucked Frisbees, had Paul McCartney play from the top of the verandah (now that was a real show stopper) – several blocks of gridlock as he sang “Back to the USSR” to adoring masses of New Yorkers. The picture below is from when the band Phish played outside the Theatre.

Unfortunately, at times Prime treats the viewers as morons, chopping and changing the program so that sometimes we’re seeing a current show, sometimes it’s a few months old, and sometimes it’s a repeat from a year ago. Last night was a show from June 25 this year: just 2 months late. Sometimes it is pretty lame, sometimes amusing, but normally, it is entertaining in a variety of ways. The guests range from the important to the fleetingly famous, or at times to the complete unknowns (the bird-whistling champions of some suburban school being a perennial champion of anonymity). Meanwhile, Letterman’s facial expression barely changes – everyone is a delight to ‘Dave’.

Inside the theatre he glad-handles the likes of Tom Hanks, Paris Hilton, Will Smith, Madonna, Barack Obama, Julia Roberts, Jake Gyllenhaal, Beyonce, Sly Stallone, Britney Spears, Bruce Willis, etc, etc, etc. Sometimes Letterman sends a cameraman down to the Vietnamese guy in the corner shop, or hands out packs of free meat to random members of the audience. Sometimes this works as parody, at other times it is a flat out flop. But last night was for me a really great show, with Eminem doing the top 10 (and evidently hating it), and Jay-Z doing an interview (and evidently loving it), and then both of the rappers performing in a rooftop performance right on top of the theatre in the centre of New York: individually at first, and then together for a finale. Not that I am a massive rap fan, except for the incredible witticisms of Marshall Mathers III and the bitching rhymes of Tupac (RIP), but on this occasion, the city of New York was the real star for me, providing a stunning backdrop to the performance.

One of the recent architectural highlights of the city that never sleeps is the TKTS Ticket booth in Times Square – an all glass, red-lit, back-lit, sculptural array of seating that is used as backdrop by day and by night. Designed (at least in part) by a New Zealand architect, Troy Donovan, a graduate of Victoria University, the Tickets Booth / Seating Stair is a stunning backdrop to the latest Jay-Z & Alicia Keys double act song “Empire State of Mind”. An example of Design adding to the experience of life all round: take a bow, Mr Donovan!

Alicia says, about the video for the song:

“The way it’s put together, it is so New York. You totally get it and understand it. It’s artistic. It’s hard. It’s beautiful. It’s, like, everything,”… … “And definitely getting to be in the middle of Times Square on my piano [with] Jay, representing our home city, is a triumph. It was unbelievable.”

New York is a city not afraid to play with its geography, an endless flux of yellow taxis flowing up one avenue, and down the next, around a malevolent grid of magnificent skyscrapers, periodically punctuated with aging decrepit water-butts on every block.

All of this was visible on the show last night – the camera swooping around, off the side of the building to reveal the drop to the street below, capturing the panorama of mainly nameless skyscrapers behind, water-butt up above the theatre as a gritty urban backdrop for Eminem (who evidently still has a thing for Detroit, even if he is the last white man left alive in the city).

They block off streets in New York for an hour or so for Letterman, even if it is the busiest, most businessy city on the planet, and the traffic just flows down another block instead. They’ve even blocked off chunks of Broadway, more or less endlessly, to provide room for outdoor seating near Times Square, and have divided off lanes for cycle ways and coffee stops. This contrasts with the timid way that we approach the roads in Wellington, where the roading division of the WCC rule the asphalt with an iron fist, allowing no lessening of the hectares of tarmac that enslave our city. Perhaps the urban design division could exert some influence, and look again at the role of the public private interface. The tiny orange sliver of land that is Courtenay Pocket Park is a start – let’s see more of that. In the mean time, enjoy New York, and enjoy the show.