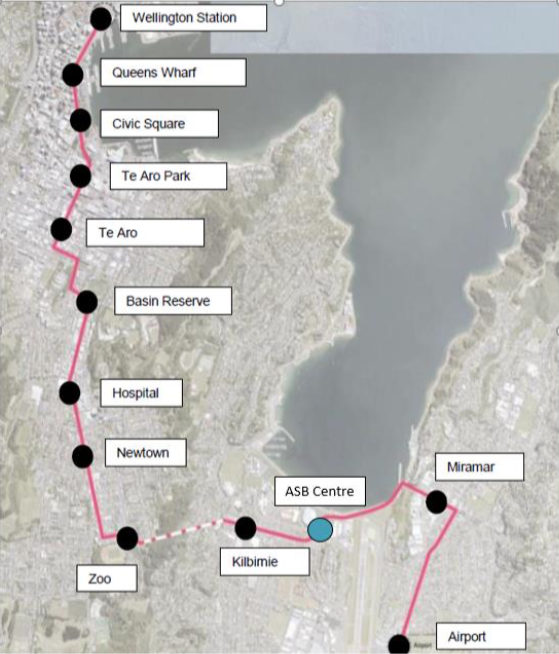 Here at The Eye of the Fish World HeadQuarters tower building, we overlook our sweet wee metropolis and purvey the scene daily. We’ve been keen for some time to see what the LGWM team has been up to, and it is exhausting to have to creep along at the snails pace they set. Still: the city asked for a thorough, careful job to be done, with all avenues being explored and so that is what they are doing. Slowly but surely they are piecing the city together: well at least we hope they are. Possibly they are asleep, or “working from home”, but their progress is glacially slow.

At times I’ve got tired of waiting and have decided to do some exploration myself. Witness here the exploration from June last year where I was musing on possibilities of travel routes. The dark blue is the bus route, down Lambton Quay, with yellow being the primary routes for cars, and the ever-hopeful turquoise band to signal the possibility of Light Rail along the Quays. Red, of course, is the zone of the exclusively pedestrian, with green selected for my guess at the cycle path network.

LGWM did eventually publish scraps of what be termed a Masterplan themselves in November, which I’ve only just found after being alerted to it by greenwelly (who IS that masked person?), and so I’ve published a few snips from their masterplanning discussion document here. Their first one, just below, shows three possible routes under consideration – in their words:

Broadly speaking, they’ve picked the same route as I have, which is no surprise really: we don’t have much choice down here in Wellsville. Our city is so narrow that the options are few.

They’re obviously keen as mustard on making the Karo Drive drivable in both directions, as I picked in the picture I drew above, but in terms of the Light Rail cutting through Te Aro, I was a little out. Here’s what they said about Mass Transit Segment 2 – Te Aro to Newtown: Options considered:

Taranaki Street, with a connection to Adelaide Rd Sub-options:

b) Tunnel Taranaki to Adelaide (Yellow)

Taranaki Street with an â€˜at gradeâ€™ connection to Adelaide Road via Memorial Park/Tasman (in other words, they prefer the Red route).

So, their chosen route in Red is similar to what I picked, going up Taranaki Street (turquoise) but then it follows the route I had picked for the Cycle Network (green). Yellow for cars (ie the high volume route for cars on SH1) and blue as the route for the buses.

Their Figure 13 proposal is remarkably similar to what I had proposed around the Basin, but of course they have taken a bit more land to do it in down on Cambridge Terrace for the Sussex St extension / over-bridge. Now that the vast long / silly Basin Bridge motorway overpass has been ruled out, this is the only logical solution, and its what will undoubtedly be unveiled in November. The only change of course is that the Southbound SH1 route is still being fought over, and while this route will still be retained in land ownership, it will still come down Vivian St for the foreseeable future.

It does irritate me the way that they have not yet produced a coherent overall MasterPlan – just fragments of what might be, and no sign yet of considering how it may come together as a whole. The junctions between one method of transport and another are crucial of course: where they mix and IF they match. For instance, what about bikes? Here (below) is all I’ve seen so far of their “Planned Central City Cycling Network”.

So apparently the cyclists are to keep coming through the Mt Vic tunnel and along SH1 with the cars and the diesel and the fumes etc, and then snake around the front of the Basin along with all the traffic and through the Arras tunnel and continue on over to the motorway on-ramp. I mean, seriously, this is just shoddy thinking and to put it bluntly, it’s a load of bullshit. That’s not a coherent Cycle Network – that is just a series of straight lines drawn with no relevance to where the cyclists would want to go. I’m calling them out on this one: they have NO idea what a Cycle Network needs to be and where it should go. My vote, of course, is that the Cycle route should peel off from Adelaide Road via the lowest rise, and make its way down Tory Street, well away from cars and trucks using SH1, Arras Tunnel, or Taranaki St, which will be filled with a Light Rail system and its tracks.

Moving on…. the rest of the planned “Masterplan” shows three possible routes over to the Airport (eventually) ie Segment 3 – To the east. Options considered:

Via Constable St/Crawford Rd to the east (Yellow)

New branch from Basin Reserve to the east (Red)

I guess that is sort of similar to what I had chosen as the most likely route, except for when you get to Kilbirnie (my sketch below). They’ve selected a route for the tunnel leading to Kilbirnie that will cause the maximum amount of disruption in the town centre, also clashing with the bus route (blue) and the cycle route (green). Still, those can easily move.

So the final outcome of all this LGWM work is this fine picture below: the desired route of the Light Rail (or as they put it in their document: “Like Light Rail…”). That means that in their minds at least, Lester the Jester’s silly “Trackless Trams” ie buses with trailers – they’re still on the table. Sigh… groan… weep… ugggh…

That’s our 20-30 year plan right there, which I hope to see completed before I’m dead, but I’m not holding out a lot of hope there at the pace they’re going so far. I’m almost dead from boredom already…

One question on that map though: why is ASB Centre in light blue when the others are merely black dots? And secondly – just how do they anticipate this getting round the two of the busiest high-speed roundabouts in the city? The problem may be twenty years away, but they need to start thinking about answers now!

Post-script Update: I’ve added in a couple of plans to show what I think Betterbee is discussing – hope I’ve got it right! First one is the ASB Indoor Sports stadium station, next is Rongotai Road and finally there is Coutts Street – which I think would be a better place to intersect with Kilbirnie rather than the other end of the township.

Betterbee is right – most of the LRT trip can be made along this route without too much disruption – I’ve shown a couple of cross-over points with dotted line. Personally, I’d prefer those in a tunnel rather than playing with the traffic.

Above is a picture of the route along Rongotai Road, which would – I think – cause chaos and congestion at the point of maximum interference in Kilbirnie – yes, Rongotai Road has a nice bare (grassed) central reservation where trains could run, but wow – think of the chaos outside Pak’n Save. Car crashes galore coming up right there.

Far better, I reckon, is the route along Coutts St – a really simple exit from Under the Mountain, under Childers Tce (due to the topography), and straight along past the Mosque, the Retirement home and the Bus Depot. Of course, that also implies that the route would shift to enlarging the tunnel under the airport – a far more direct route to the Airport for the 90% of Wellingtonians who don’t live in Miramar.