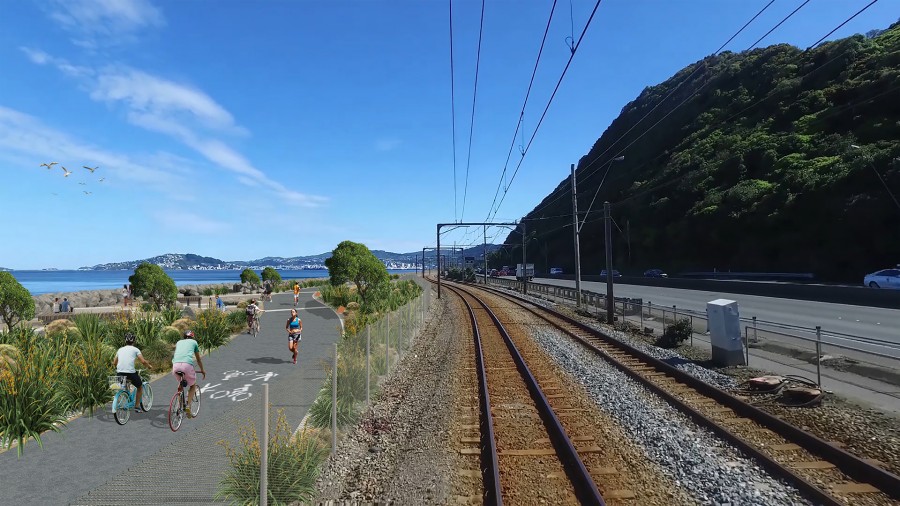 One of Wellington’s long-desired and much awaited projects is apparently to get underway as part of the Government’s shovel-ready infrastructure projects: Te Ara Tupua, aka the Ngauranga to Petone Cycleway.

It isn’t going to have to go through the usual lengthy Resource Consent process which I would normally be very supportive of – this is a project that has been proposed and discussed for the last hundred years or so and indeed was there long before the current motorway wiped it out. I’ve got no issues with it – indeed, the opposite – I’m much in support of it, but there is something that does need to be discussed in public: Where is the rock going to come from? And how is it going to get there?

It is a massive project extending along the harbour edge for several kilometres, and having a width of several metres, extending out into the sea, it will take several million cubic metres of rather large rock. I’m not exactly sure how much – let’s just say that we can all agree that it will be “a lot”. It is not the sort of project that sea floor sand and silt can be used – it needs big boulders of several hundred kilograms each, rough edged so they can interlock together and not get dislodged by fierce seas during a raging southerly.

It is drastically needed as the present road is just way too dangerous for cyclists and pedestrians – but not just that. It will provide some much needed resilience to the whole travel corridor. Yes, it is along a major fault line – and that is all the more reason why it needs to be done and done well.

Luckily there are a couple of massive quarries nearby – one in Ngauranga and another at Horokiwi. All that sits between them and the work site is a 4-6 lane motorway and the most busy railway tracks in New Zealand. I don’t know, but I suspect, that the proposal will be that the rock is quarried from Horokiwi and put into large trucks who will then join the motorway, drive north to Petone and cross over into Petone, drive south to dislodge 30-40 tonnes at a time, then resume onto the motorway, head south until Ngauranga and do a U-turn, back up north to the quarry. And that this will be repeated about 250,000 times.

I’m not keen on that.

Even if there were 250 trucks doing that trip each 1000 times, or 25 trucks doing the trip 10,000 times each, the plain truth is that this is a massive amount of road traffic and will effectively help destroy the motorways that are there already, so we will need to undertake significant extra maintenance work at some stage – and note that this would be even worse of we use the quarry at Ngauranga as well.

I think the original plan was, of course, that excavation of the Petone to Grenada Link Road was going to provide the roading material – remember that there was a massive dig proposed and the road was eventually cancelled as the amount was going to have to be so vast.

The Link Road is still being redesigned – or is more likely totally shelved at present, but will resurface at some stage. Personally, I think the two projects need to go hand in hand – do one, and you have to do the other at the same time.

The Horokiwi quarry is in precisely the wrong position to be the major link road through to Grenada – almost, but not quite. The Link Road was planned to go through at the start of Petone with a massive new roundabout above the existing SH2, with the Link itself disappearing up Cornish Street (where Ulrich Aluminium is now) and tracking up besides the Koromiko Stream where it exits the Belmont Regional Park. Although the route and the amount of rock excavated needs to be redefined, it is the only logical place for the rock to come from for Te Ara Tupua. Taking more rock from Howokiwi makes no sense here – but purposely excavating along a more useful route would make a lot of sense. May I remind any readers that Horokiwi has been operating for many decades and is reaching its limits (of boundary) and is effectively digging a Very Big Hole in the Middle of Nowhere. We can’t put the Link Road into a Very Big Hole – it needs to be a routed along a Very Shallow Incline, in a place that is in the Middle of Somewhere Useful.

I’d like to propose two things: firstly, that the Link Road be the source for the rock (not Horokiwi nor Ngauranga), and that the projects are linked. And secondly, that the overpass planned at Petone is started first, to allow the rock to come over the motorway safely without coming into contact with either people, cars, or trains. They can finish the entire Roundabout later, but what would be needed now is at least one massive bridge over the highway and tramlines, so that the rock can get from one side to another swiftly and safely.

Under this “shovel-ready” system, I don’t know what the process is, but this needs to be mandated before any further progress is made.